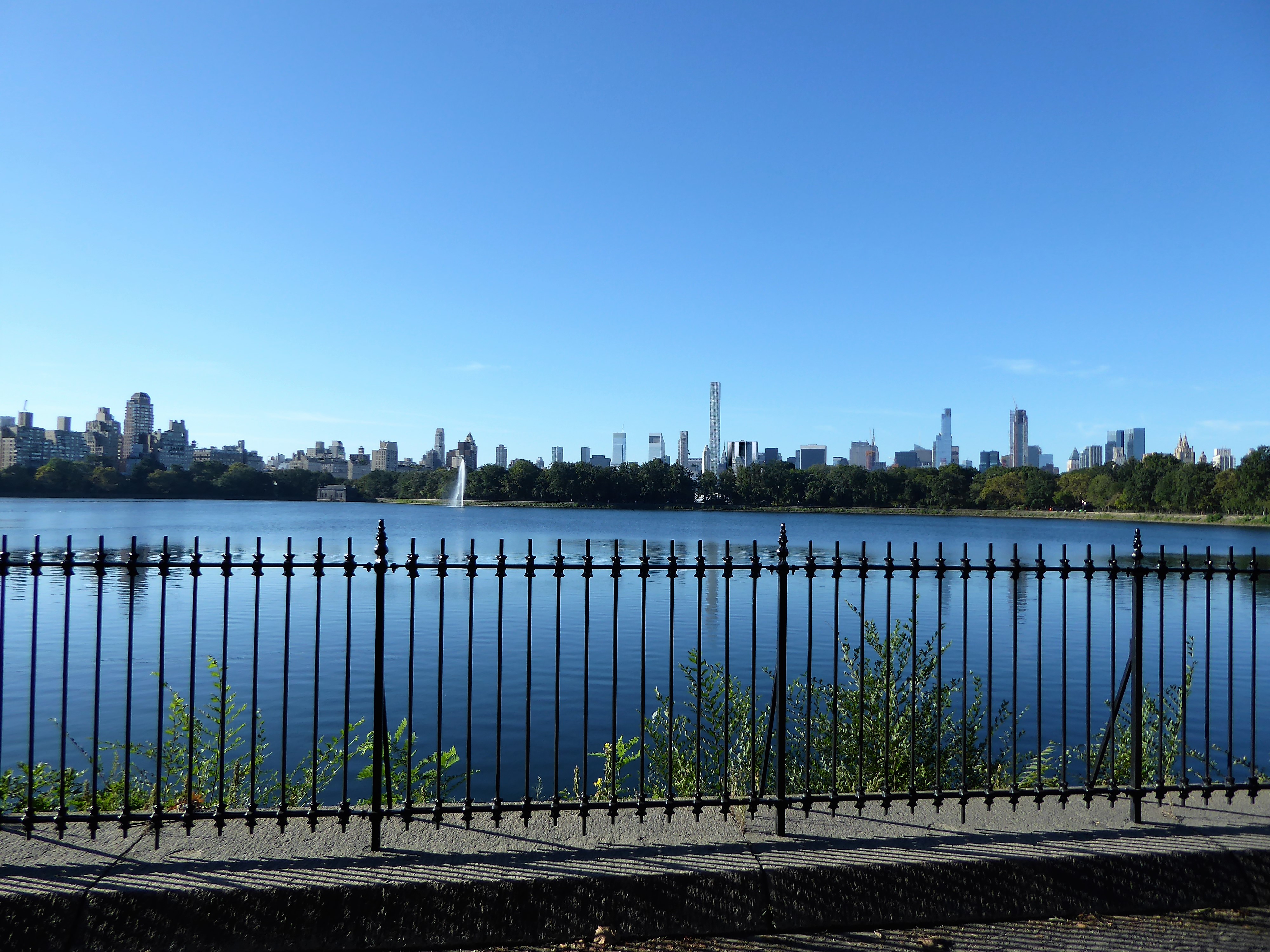 New York City is high on everyone’s travel bucket list. There is so much to see and do in the Big Apple. And there is plenty for families to do in Manhattan. Here is a perfect two day Manhattan itinerary for families.

We assume that you arrived in the city the previous night. That gives you two full days to explore the city. Day One will take you throughout Midtown and Upper Manhattan. As a family, you can explore the quiet beauty of Central Park, learn about the American Revolution and the U.S. Civil War, revel in the chaos of Times Square, and enjoy a Broadway show.

No trip to New York is complete without a walk in Central Park. Early morning is a perfect time for a couple of reasons. First, the city is just coming to life, so the quiet park is even more sedate during the early hours. Secondly, the first rays of sunlight streaming from the buildings on to the park grounds is breathtaking. Finally, dogs can be off-leash during the early hours, so dog lovers get visits from furry friends.

On the north end of Central Park, in Upper Manhattan, you can take a walk through Morningside Heights.

St. John the Divine is in the Morningside Heights neighborhood. It is one of the largest church building in the world (in terms of square footage). The Gothic Revival design is fetching and the on-site gardens are sure to inspire.

The final resting place of the nation’s 18th President is a mausoleum on the banks of the Hudson River. The Civil War Union General, who became President of the U.S., is memorialized at the national memorial. The caskets of Grant and his wife are enshrined in the immaculate marble rotunda of the mausoleum.

The grandeur of the memorial encourages the visitor to remember the noble character traits of General Grant. The more pedestrian museum down the river bank presents a more humble and honest portrait of the man.

Located in the middle of Harlem, Hamilton Grange National Memorial is the home of the country’s first Secretary of the Treasury. The Revolutionary War Hero built and moved into the home two years before his fatal duel with Aaron Burr.

The location used to be in the country, and Hamilton and other wealthy New Yorkers retreated to the country during the summer months when disease affected the city.

Tours of the home take place daily. The home is opulently decorated so that guests could see at a glance that the family was well off. The home has been restored, and some of the furniture is original to the Hamilton family.

City College was the first free university in the United States. The college, adjacent to Hamilton Grange National Memorial, has unforgettable architecture. The buildings look like something you would find only on a gingerbread house or an animated movie. They remind us of something you would find in the game “Candyland” or as a boarding house at Hogwarts.

The structures stand out and above the smaller structures throughout the rest of Harlem.

After a jam-packed morning and afternoon in Upper Manhattan and Harlem, you’ll need a little downtime. After a short rest, grab a taxi or Uber and head to midtown and Times Square.

New York is the “City that never sleeps.” And Times Square gives the city that nickname. There is always something happening in Times Square. It’s busy, bustling, vibrant, frenetic. And crowded. No matter the time of day, you’ll find a crowd in Times Square.

It’s difficult not to look up continually as you walk the streets here. The billboards, screens and lights draw your attention upward. Still, take the time to check out the shops and theaters lining the streets. Who knows, if you’re there at just the right time, you might see a Broadway Star leaving the theater and getting in a limo.

Catch a Broadway Show, of course

You’re right in Times Square. Hopefully, you took the time to purchase tickets to a Broadway show. The Broadway theaters put on some of the world’s best productions. It would be a shame to miss out on a musical with the family. Fortunately, there are plenty of family-friendly options showing all times of the year.

What’s better than an event-filled first day in New York City? A second event-filled day! Our second day itinerary is once again packed full. Today, you’ll head to Lower Manhattan and city Lady Liberty in all her glory.

Your day begins with a trip to the southern tip of Manhattan. Stop at Battery Park for an unbelievable view of the elegant buildings of Lower Manhattan.

Then head over to Castle Clinton National Monument. The circular sandstone fort is listed on the National Register of Historic Places. The fort was a defensive structure for the city. However, today, it is a monument administered by the National Park Service. You can check out displays about the fort. Here, you also purchase ferry tickets for a trip to Liberty and Ellis Islands.

Take a Ferry to Liberty Island

It’s a short ferry ride from Castle Clinton to Liberty Island. Once docked, you can walk around the island and admire the Statue of Liberty from every side and angle. You also tour the pedestal and crown of the statue at an extra cost.

Make sure to walk the entire circle of the island. It’s worth it to see the Statue from so many vantage points. You also see great views of Manhattan. We really liked the sculpture garden on the island as well.

Continue on the Ferry to Ellis Island

After your ferry ride concludes, you can walk up to Wall Street where you can see the famous bull in front of the New York Stock Exchange building.

Just a couple of blocks from Wall Street and Federal Hall, you’ll reach Ground Zero. On the morning of September 11, 2001, two planes crashed in to the World Trade Center’s Twin Towers, destroying those buildings. More than 2,000 people lost their lives on that fateful morning from attacks in New York, Washington D.C. and a plane downed in Pennsylvania.

The most numerous losses were in New York.

Today, Ground Zero is a memorial to those who lost their lives on that day. In addition to the fountains standing where the towers once stood, you can visit the 9/11 museum (which may be emotionally disconcerting for young children).

Today, you find the nearby Oculus and Freedom Tower rising from Ground Zero, a testament to the indomitable spirit of perseverance within humankind.

Getting Around the City

There are plenty of transportation options to get around the city. Our itinerary has a lot of distant location, so it’s not advisable to walk.

There are, however, several other options. The subway will get you to many of our locations. You also can catch a taxi. Uber, Lyft, and Via drivers are all around the city. And you can rent bicycles from many stations throughout the city if you prefer that mode of transportation.

Of course, two days in Manhattan is not enough time to see and do everything. Hopefully, though, this guide will give you some direction in planning a perfect Manhattan family vacation.

Our detailed guide to Morningside Heights and Harlem, including Hamilton’s Grange.

Our detailed Guide to Visiting the 9/11 Museum and Freedom Tower and Ground Zero. 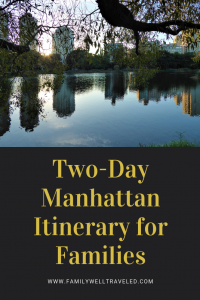 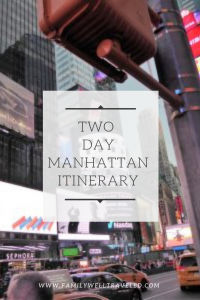