Can’t Get Hamilton Tix? See His New York Home Instead 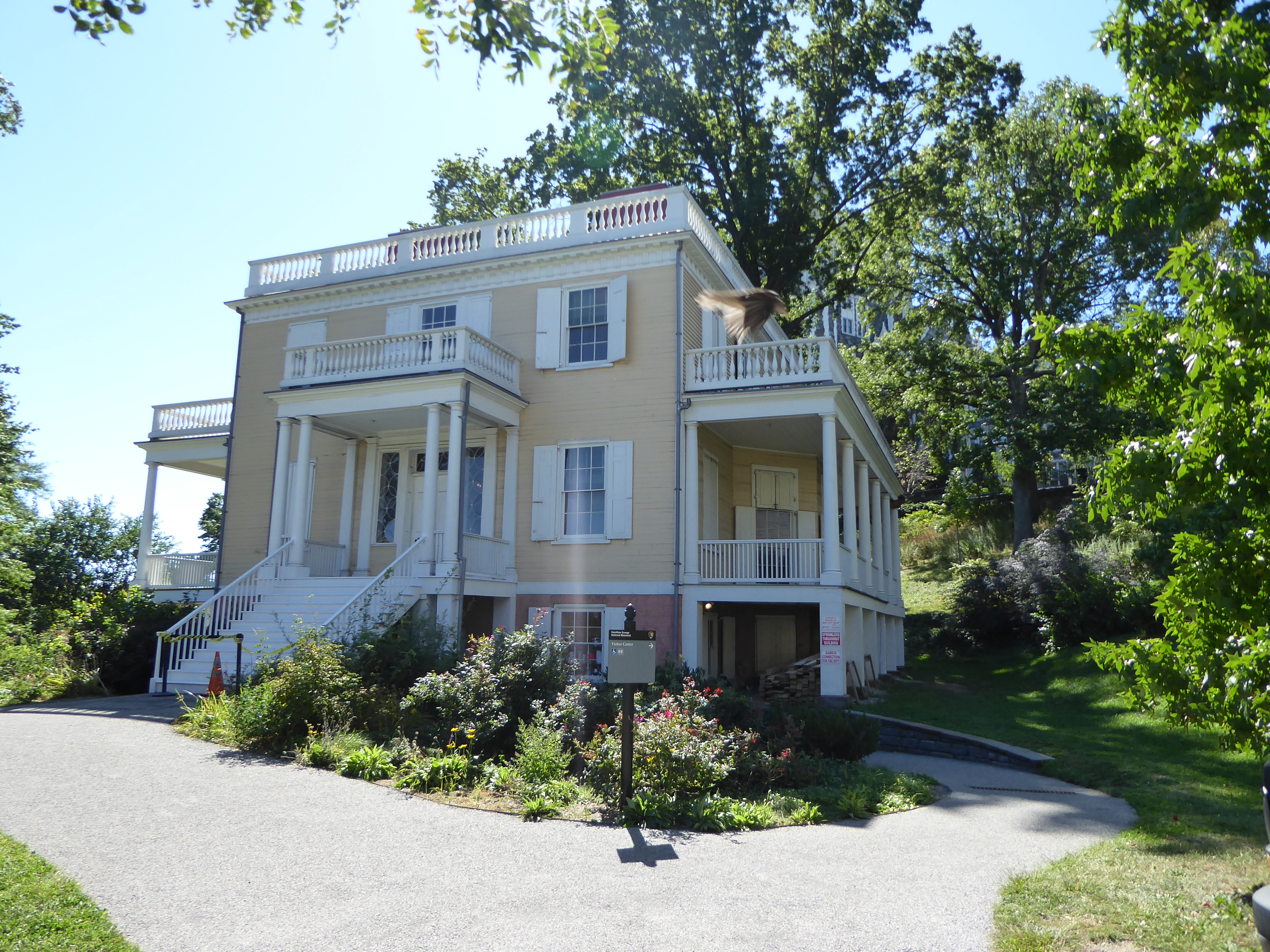 Unable to get tickets to the Broadway musical sensation Hamilton? Instead you can visit his home, the Grange, located in Harlem.

My trip to Manhattan took me on a journey to Morningside Heights and Harlem where I toured the sites of two American icons — President Ulysses S. Grant and Alexander Hamilton.

After a whirlwind of a day visiting the Statue of Liberty and Ellis Island and the Ground Zero Memorial, my mom, sister and I spent a more leisurely paced day in Morningside Heights and Harlem, in Upper Manhattan. We toured the final resting place of the 18th U.S. President, Ulysses Grant, and the home of Alexander Hamilton. Both sites are maintained by the U.S. National Park Service.

Hugging the banks of the Hudson River to the northwest of Central Park, lies the Morningside Heights neighborhood.

Near the park we found St. John’s the Divine Cathedral. The Episcopal church is the fifth largest church in the world (in terms of area) and a delightful example of Gothic Revival architecture.

I especially enjoyed the courtyard to the right of the cathedral entrance. In the courtyard we found the Peace Fountain, a sculpture celebrating the victory of good over evil. The 40-foot tall bronze sculpture in topped with the archangel Michael embracing a giraffe after his defeat of Satan.

On the bank of the Hudson River, General Grant National Memorial is a marble mausoleum holding the remains of President Ulysses Grant and his wife, Julia.

The General Grant National Memorial not only holds the remains of the President and Union General, but also tells his storied career, from the battles in which he fought, to his Army uniform and other memorabilia.

Of course, walking around the rotunda of the mausoleum is a somber and awe-inspiring experience. One is left with the distinct impression that Grant was a man worthy of great respect and honor. While this impression can be debated, it is clear that those who built the dome wanted to pay homage and respect to this American icon.

Walking around the rotunda, you hear every foot step that falls and whispering voice. The alabaster marble accentuates every fleck of light cascading from the windows and glass of the dome. Golden hues pervade the building, where yellow glass decorates the building and creates a solemn ambiance.

As you walk around, you see artwork of an austere general, highlighting his successful military campaigns during the U.S. Civil War. The white sculptures gracing the walls gently whisper that you are in the presence of greatness. Few military leaders, we are reminded by the extravagance of artwork and hushed footfalls, are deserving of such a place for a final rest.

The flags representing the United States stand at attention, overlooking the tomb of the General.

Across the street and down a grassy embankment, you find a visitor’s center for the National Memorial. It is tucked away in the riverside embankment and is quiet pedestrian compared to the extravagant marble edifice lying a couple hundred feet away.

In the visitor’s center, we got a less heralded, more accurate representation of the life and legacy of Grant. While the mausoleum leaves you with the impression that you are in the presence of divinity, the center shows a humbler, more nitty-gritty reality with artifacts from the General’s early life and home. It was fun to see this contrast and have the opportunity to consider how we can raise fallible men and women on a pedestal that is impossible to uphold.

After our visit to General Grant National Memorial we took a bus ride a few blocks over to Harlem.

On our way to Hamilton’s Grange, we walked around City College, the first free public institution for higher learning in the United States. The college was founded in 1847, and has 10 Nobel Prize alumni.

What we loved about City College, however, was walking through the campus, admiring the buildings that look like something from the board game Candyland.

The architecture is stunning. the college is a stark contrast with the more non-descript low rise buildings of the neighboring Harlem neighborhood.

in the shadows of City College lies the home of Alexander Hamilton. The American Founding Father is amazingly popular given the success of the Broadway musical about his life. We did look at getting Hamilton tickets, but they were out of our price range. We tried our hand at the daily lottery to win $10 day of tickets, to no avail.

A visit to the man’s New York home seemed an appropriate alternative to the musical.

The Hamilton Grange National Memorial lies on property owned by Hamilton, but the home has been moved a couple of times to its current location. In fact, we got to watch a video about the last move 10 years ago, which was highly entertaining. The entire structure was hoisted 30 feet in the air, over nearby buildings, and moved to its present position.

Although Hamilton spent many years in New York City, he lived in the Grange only two years before his duel with Aaron Burr. The duel killed Hamilton, leaving his widow and children behind.

It is amazing to me how tranquil the grounds are, even though you are in the middle of a booming metropolis. I was able to sit outside the home before our tour of the premises, and heard nary a sound. While relaxing in the yard, I saw birds and squirrels.

Inside the Grange, we found a confined seating area where we could watch a video about the life of the first U.S. Treasury Secretary, born illegitimately on the Caribbean island of Nevis. The lower lever of the home also has displays revealing Hamilton’s time as a soldier, as a writer of the Constitution, and other events. There was not a lot of space on this level to roam around, and there was a large number of visitors.

We also took a tour of the second floor of the residence. The crowded tour made it difficult to maneuver through the stairways and the rooms. However, it was a great opportunity to see the rooms which includes pieces original to the home.

As with most wealthy Americans, the Hamiltons decorated the home in opulent extravagance in order to show off their wealth. Romanesque busts, pigmented paint, Grecian columns, drapery, silver, and fireplaces all illustrated the family’s privilege.

I recommend signing up for the tour of the home. Without taking the tour, you can visit the lower floor of the Grange, but you don’t get a good sense of the lifestyle or the home’s residents. And the tour is free, so why not take time to learn about Colonial U.S. History and more about one of the American icons that shaped the country into what it is today. It is a great opportunity for kids to learn Colonial history and see an actual home from that era.

The Grange tells the story of an immigrant who succeeded in a young America. It is fitting that the home is in New York City, home of the Statue of Liberty and Ellis Island. The city represents a true melting pot, a place where immigrants from all nations come together for an opportunity to be successful and start fresh. Hamilton proved that this is possible.

Have you been to General Grant National Memorial or Hamilton Grange? Tell us what you think. We would love to hear your thoughts in the comments.

What to do on a tour of New York’s Ground Zero.

A guide to visiting The Statue of Liberty and Ellis Island. 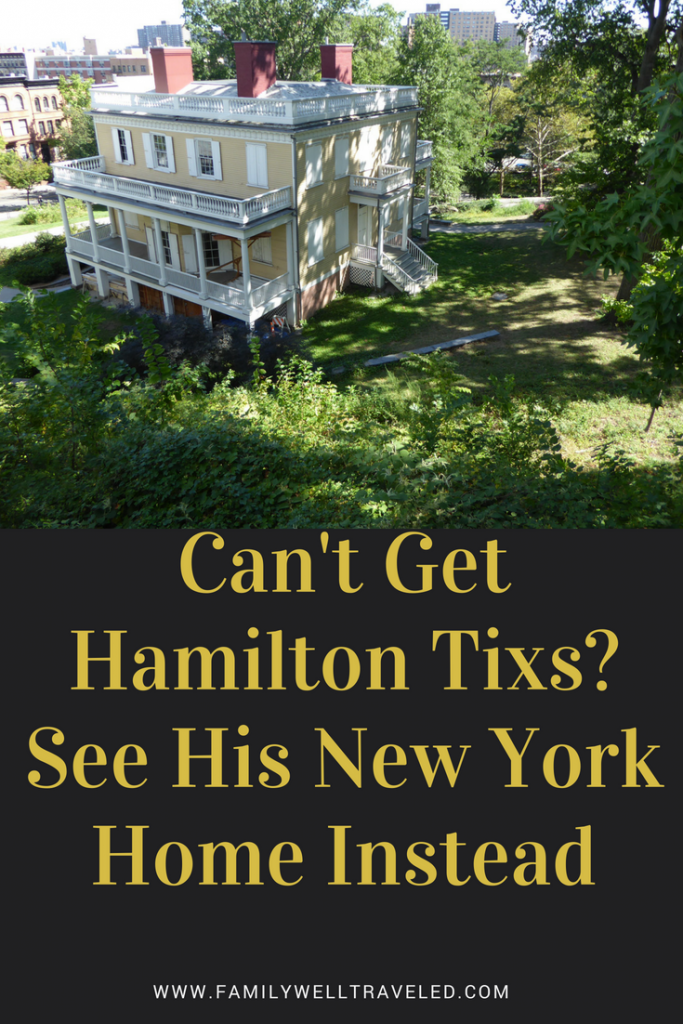 26 thoughts on “Can’t Get Hamilton Tix? See His New York Home Instead”