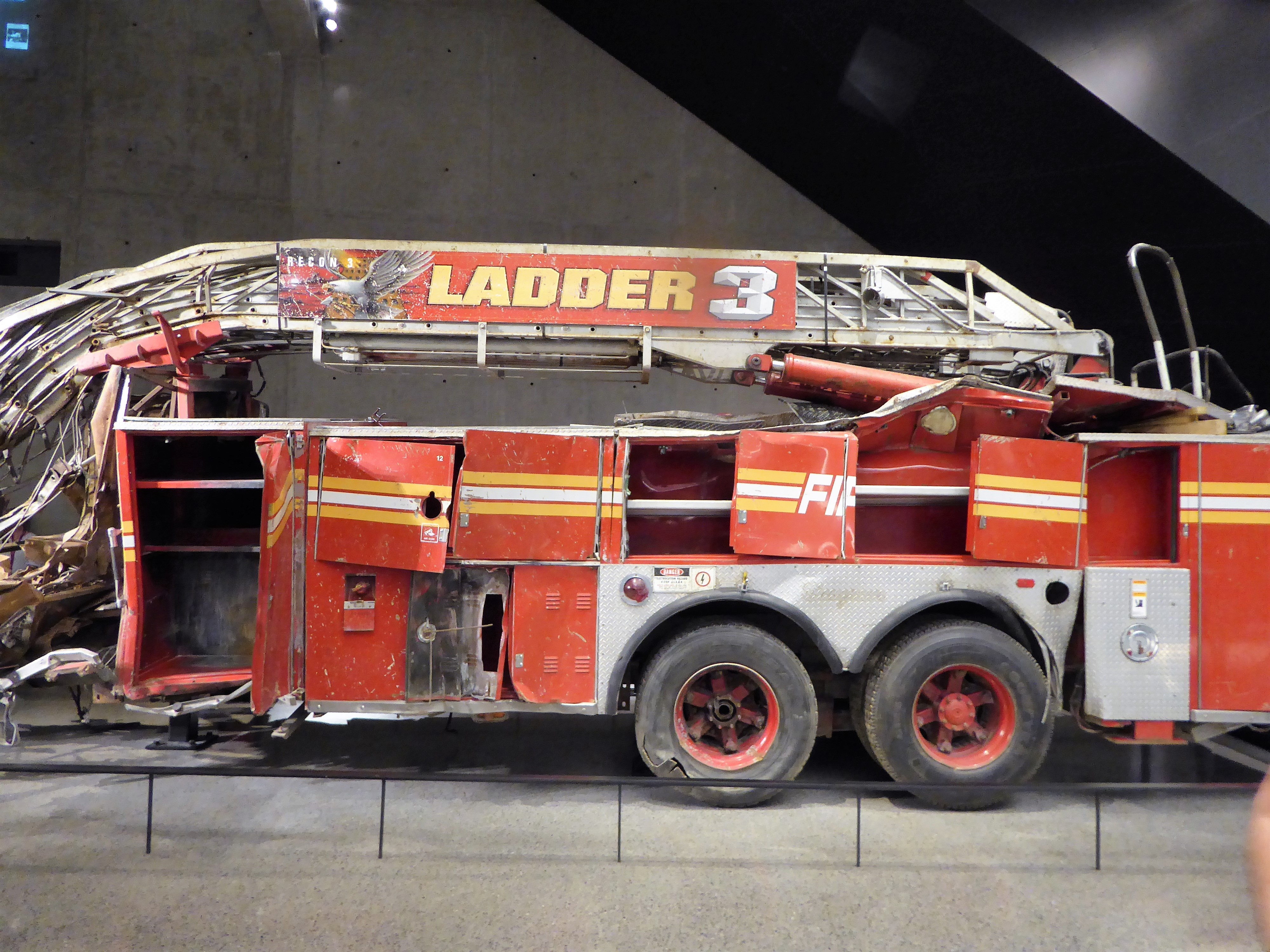 The United States — and the world — changed forever on September 11, 2001. Terrorists ran planes into the World Trade Center buildings in New York, the Pentagon in Washington D.C., and a field in Pennsylvania. New York’s Ground Zero became the most infamous of these locations, with more than 2,000 lives lost.

Now, many years later, this harrowing reminder of inhumanity is solemnly remembered with the Ground Zero Memorial, the 9/11 Museum and the massive Freedom Tower.

I was able to visit the site with my mother and sister. It brought back memories of that day, while I watched from a television and shed tears as I watched the devastation.

While there are many places in New York City that one should see (including the Statue of Liberty and Ellis Island), I would argue that Ground Zero is one location that we must visit and take our children. While not with my kids during this trip, I know that we must get to the site before they grow up and move out of our home.

St Paul’s is the “Little Chapel That Stood.” During the 9/11 attacks many buildings in the area toppled after the collapse of the World Trade Centers, but nearby St Paul’s withstood the instability and became a central location for the relief workers over the next several months. The church, built in 1790, is famed for George Washington attending services.

You can enter the church, which still holds services, throughout the week. A 9/11 Memorial Wall located at the back of the chapel pays homage to the emergency crews and relief workers who worked tirelessly after the attacks.

I love visiting old churches and their graveyards. This graveyard felt more somber as I looked past the headstones to the Ground Zero Memorial and Freedom Tower across the street.

The church serves as a beacon of hope, even in the darkest of times.

This strange looking building, designed by architect Santiago Calatrava, serves as one of New York Port Authority’s transportation hubs. An estimated 250,000 daily commuters pass through the hub on one of 11 subway lines. The Oculus also has 78,000 square feet of retail and dining space.

We called it the Whale, because of its shape. Inside, the pristine white architecture seems to deafen the noise of all the commuters, shoppers and diners.

The Oculus provides amazing picture-perfect shots of the Freedom Tower. And while it seems a little out of place at Ground Zero, I think it is a fitting tribute to the indomitable spirit of New York and humankind in general. The building seems to speak loudly, “You will not hold us down. We will persevere.”

The site where World Trade Center One and Two once stood has been turned into the Ground Zero Memorial Park. Cascading water plummets down the twin reflecting pools, each nearly an acre in size. The waterfalls are the largest man-made ones in North America.

Around the reflecting pools are the names of 2,977 people who lost their lives in New York City, the Pentagon, and Shanksville, Pennsylvania.

I know the noise of the city echoed all around me during the visit. However, I do not remember the honking of horns and buzzing of construction equipment while here. My family and I soberly watched the waterfalls dropping the massive amounts of water.

We read the names of the victims and cried as we saw the gifts left next to the inscribed names. I thought about all that I have, and how those who lost loved ones that day must still feel the immeasurable void.

I have a tip to those visiting the Ground Zero Memorial. Please, please, please be respectful of the site. I imagine Ground Zero is much like visiting a Jewish Concentration Camp or the fields of Normandy in Europe or the Killing Fields in Cambodia. It is a somber site which deserves some quiet and reflection. Yet, I saw a few people with their selfie sticks, smiling for the camera as they captured their picture at the site. There is a time and place for everything, and the memorial does not seem like the place for a selfie.

The reflecting pools stand in the shadow of Freedom Tower, which towers over the skyline of New York City. The structure stands an impressive 1,776 feet (honoring the year when the United States’s colonist declared their independence from England’s King George III).

The tower is a crowning achievement to humankind’s ability to rise from difficulties and stand tall against those things that might bring us low. Seen from almost every location in lower Manhattan, it is a fitting companion to the memorial.

This was my first visit to Ground Zero. My sister lives in the city, and my Mom visited before. Both have gone to the observation deck at the top of Freedom Tower. So, my mom asked me what I wanted to do while at Ground Zero. I told her unhesitatingly that I wanted to go to the 9/11 Museum.

The museum tunnels under the Ground Zero memorial. You are led down seven stories into the bowels of the former twin towers, and get to see where the underground foundations of the towers once stood.

Descending the escalator past the Tridents (steel beams that once formed part of the outer structure of the North Tower) is a reminder that you are going to witness a dark time in United States history. I had no idea how moving the experience would be and how raw I would feel after leaving.

The massive size of the structures made the experience real for me. As I saw the Trident beams or looked at the remnants where metal support structures once stood, I realized that although I found the events frightening while watching from TV, they were even more earth-shattering in person.

I looked at the a segment of the North Tower’s radio and television antennae. I was dwarfed standing next to it.

As I walked by the fire engine Ladder 3, I remembered the emergency workers who gave their lives that day in order to save others.

The most moving part of the museum, however, is not seen in pictures. In fact, photography is prohibited in this area. Here, you hear the voices and see the remnants of those who perished. You are inundated with the recorded voices of people recalling where they were that fateful day. You see replays of the morning television shows as they break the news.

There also are the things you see. A charred rolodex that sat on someone’s desk. A clock, stopped in time, shows the minute when the plane hit a tower. So does a watch worn by a victim. You see pieces of each plane.

And you hear the voices. Recordings of news shows, 9-1-1 dispatch calls, firefighter conversations reverberate throughout the halls. You read and hear the final messages left on voicemail machines. Survivors recall their escapes and loved ones record their final moments with their lost loved ones.

It is an overwhelming experience. In truth, we were unable to get through the exhibit because those voices and images proved too much for us. They brought back some of the feelings we felt on that day. They also created new feelings that we could not experience until time had passed and we had grown in maturity.

I write all of this as a warning. The museum is probably too emotionally charged for young children.  It is better suited to teenagers. I want my kids to go someday, but I think they are too young at present.

Ground Zero is one of the most important places I have ever traveled. As I said, I do want my kids to go to the site one day. One of the amazing things about traveling is that we can experience firsthand some of the worst and best of humanity.

It is important for our kids to know both the greatness found within humanity and the atrocities that we perpetrate on each other. At Ground Zero, one is able to see humankind at its worst and at its best.

There are very few things in life more important than this. 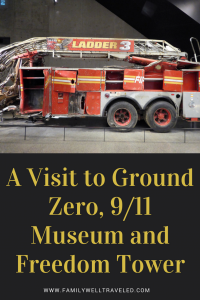 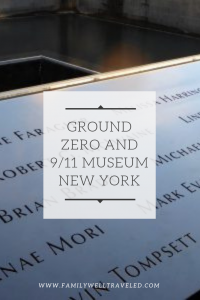 All photos and content by Family Well Traveled. Use of photos or content without permission will result in legal action.