We Survived The Balcony House Tour at Mesa Verde 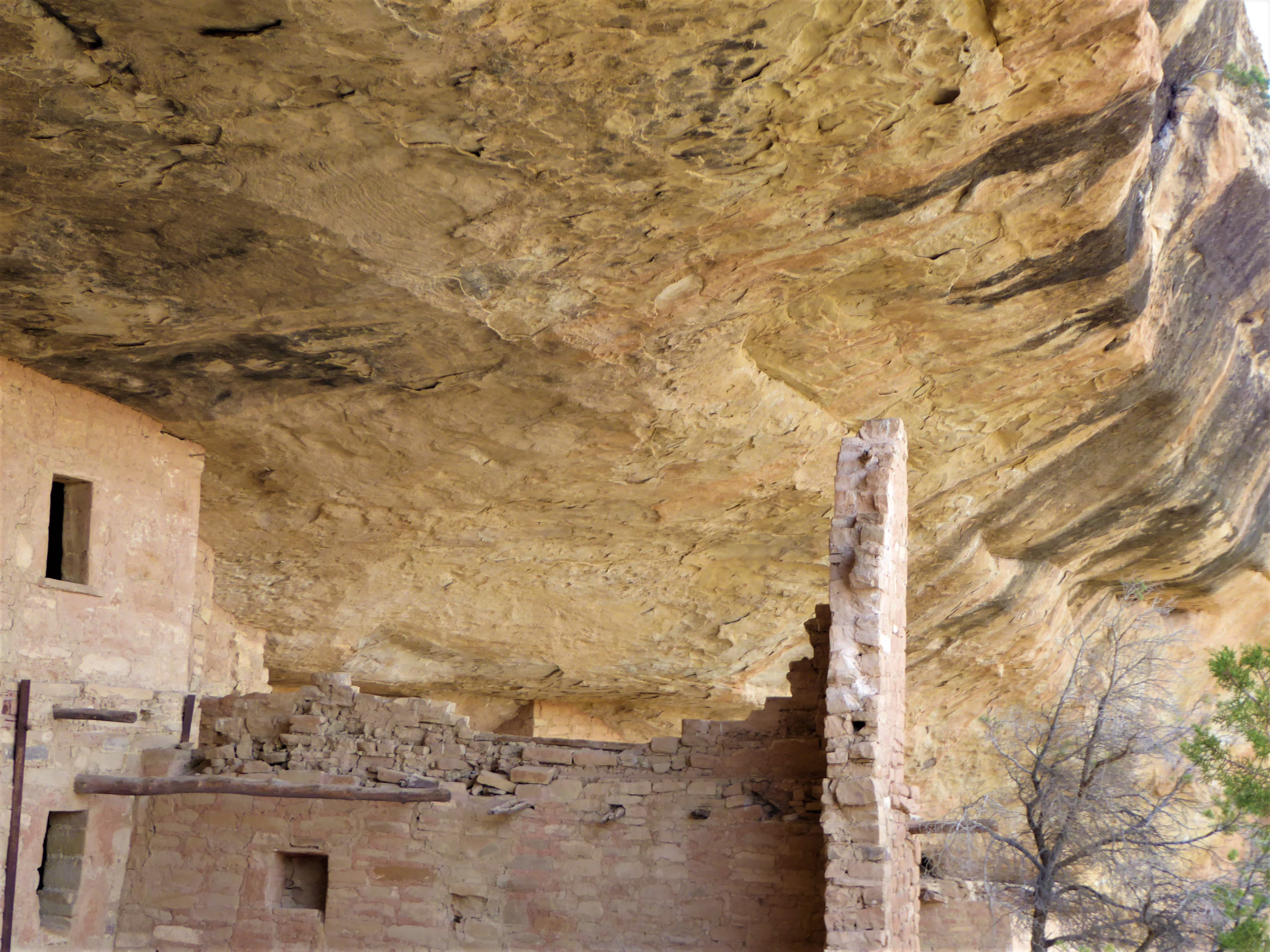 After the tour ended, our son claimed he wanted a T-shirt that read, “I survived the Balcony House Tour at Mesa Verde National Park.”

We enjoyed Mesa Verde National Park so much during our first trip there in late winter/early spring. However, we missed one thing — a Ranger-led tour of the sites. Tours are not available during the winter months. We anxiously anticipated a return trip complete with tours of the sites.

Our second trip to Mesa Verde included Ranger-led tours of Cliff Palace and Balcony House. The Balcony House Tour is the more arduous tour, requiring a quarter-mile hike down to the site, a climb up a 32-foot tall ladder, a crawl through a narrow tunnel, and a 70-foot almost vertical ascent up a rocky cliff using foot-and-hand holds, narrow sandstone steps, and steep-pitched ladders.

After all of this, my family earned the right to buy and wear shirts claiming, “I survived the Balcony House Tour.”

What makes Mesa Verde so fascinating is the mystery surrounding the departure of the Ancestral Pueblo people around 1300 A.D. Many theories abound regarding their sudden departure from the valley. People conjecture that famine, fire, drought, or enemies brought about the transition of the people from Mesa Verde south to present day New Mexico and Arizona. Modern-Day ancestors claim that it was time to leave the region.

One of the special features of Balcony House is its inaccessibility from the roads on the upper mesa. The structure can be seen from a lookout far away, but the site is unseen from the parking lot above it. You absolutely must take the tour and hike the 100 feet down (and up) to see the location close up.

Tour costs are $5 USD per person and can be booked two days in advance at the Visitors Center or Museum.

Unlike the Cliff Palace tour, Balcony House allows you almost unfettered access to climb in and look around the rooms and the structures.

The tour, however, is not for the faint of heart. It is grueling. It’s best to take it in stages. As you begin the tour, your Park Ranger will walk you through the stages of the tour, explaining that you will ascend a 32-foot tall ladder and crawl through a 12-foot crevice. However, words don’t adequately describe what it feels like to make those vertical climbs. Once you’re in the thick of it, however, there’s really no way to turn back.

Our son is afraid of heights, but he has a great affinity for the Ancestral Pueblo people. He says that he can sense them talking to him at Mesa Verde. So, he was willing to confront his fear of heights to take the Balcony House Tour.

Descending Below the Structure

The tour begins with a short walk past a roped area and down a paved walkway. You learn what we know about the Ancestral Pueblo people and also learn that there is a lot we do not know. The people were farmers, growing beans, squash and corn. The area also had deer and elk for them to hunt, but as the years wore on the forest land was wiped out and the large game left. While the Pueblo lived in the region for 700 years, they only built cliff dwellings the last 100-150 years at the site.

After the talk, we were led further down the paved walkway, past a gate and to the base of a ladder. The descent from the parking lot is about 100 feet. At the base of the ladder, we were able to look up into Balcony House.

From here we saw evidence of a seep spring. The seep springs were water sources for the Ancestral Pueblo. Rain water seeped into the mesa above, working its way through the sandstone. While our seep spring drained into the dirt, the Pueblo would have collected the water building stone chambers.

Getting Into Balcony House

Then the hard work began. We climbed at 32-foot ladder in groups of two. The steep climb prohibits holding things, so everything is secured in backpacks or pockets. Also, children needed to climb the ladder without assistance (So it’s not a tour for a toddler). Our 8-year-old daughter put everyone to shame, fearlessly and swiftly climbing the ladder

Once up the ladder, we walked through a narrow, dark passageway on to the balcony of Balcony House. Here we looked into the rooms and admired the craftsmanship of the houses. The rooms were built with bricks and mortar and covered with a adobe or mortar. Most likely, the covering was a bright red, suggesting that the cliff dwellings were not hidden from enemy view.

A Look Around Balcony House

We were able to see some of the mortar still intact. In this arid region, there was very little decay and weathering. Also, since the home was on the opposite side of prevailing winds it faced very little exposure to elements like wind, rain, snow and ice. Hidden under the sandstone cliffs, the rooms are fairly cool in summer and conserve heat in the winter.

At Balcony House, we saw that the structures were always repaired and rebuilt. We saw evidence of a door closed off and sealed with mortar. We also saw the sandstone above stained black with the soot of fire from ancient fireplaces and stoves.

From the dwelling, we looked out to the mesa top above us and into the deep earthen walls leading to the valley below. The valley is hundreds of feet below. Scholars believe that the Ancestral Pueblo would have climbed the sandstone up to the mesa to farm and then climb back down to their homes using foot and hand holds carved into the rock. They also may have used ladders for the climb.

From here we walked into the cavern, through some rooms to the other side of Balcony House where we saw the two kivas. The kiva is a circular place of worship. It was an in-home chapel where the family would worship. Today, the kivas are open, but in the day they were roofed and one entered from the roof by climbing down a ladder. Kivas have an elaborate ventilation system with air pulled in from outside, deflected throughout the structure and then released through a chimney.

Much is still unknown about the religious practices of the people, but we do know from the kivas that religion played an important role in the culture.

At this point, the tour ended officially. We were able to wander around the structure, looking in rooms where we were able to see some artwork on the walls. Mano and metate, or mortar and pestle, are at the site, too.

We found a small pool of water left over from the previous night’s storm. The Pueblo would have used crevices and holes like this to collect water.

We loitered as long as we felt comfortable, and then left Balcony House. Our exit was located where the residents most likely entered the structure.

We got on our hands and knees to work our way through a narrow 12-foot long crawl space. Midway through the tunnel you can stand up and from here I was able to see wood beams thought to be original to the design of Balcony House. This crawl space was likely how the residents entered Balcony House.

This was a steep climb. There are a series of ladders that are almost completely vertical. Sandstone steps are carved into the rock. These too are steep, and we had to hold onto anchored chain next to the steps. Some of the ascent simply requires you to rest your hand or foot in holds carved into the sandstone.

We didn’t take a lot of time to think about how crazy and slightly dangerous our ascent was. It was better for us to press on and not look back (or down, please don’t look down).

While the climb up the 32-foot ladder did not seem too bad, this climb out of Balcony House was a little extreme. Those with difficulty climbing stairs would have difficulty on this tour.

As we reached the top of the climb we noticed a turkey vulture flying above the mesa. The predator in search of carrion was a reminder of the every day dangers the Ancestral Pueblo faced. It also reminded us how we had successfully toured Balcony House overcoming some fears along the way. That turkey vulture was seeking a corpse to consume. We, however, were alive and better for our experience because we had survived the Balcony House Tour.

Our visit to the Ancestral Pueblo site Bandelier National Monument in New Mexico.

Could you do it? Or have you taken the Balcony House Tour at Mesa Verde? Let us know. Leave a comment below. 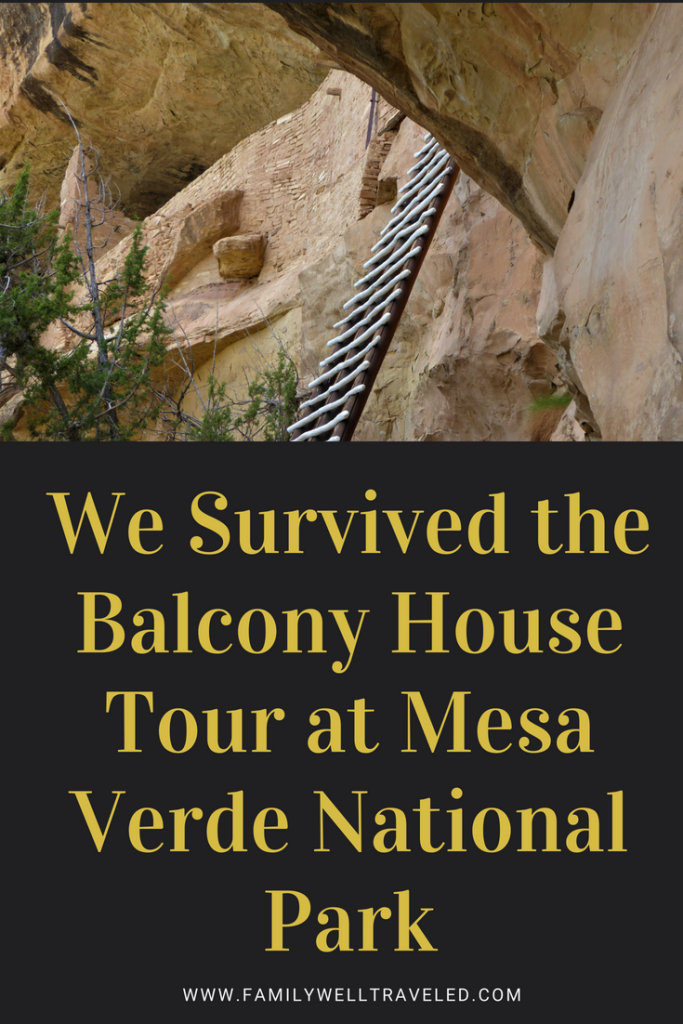