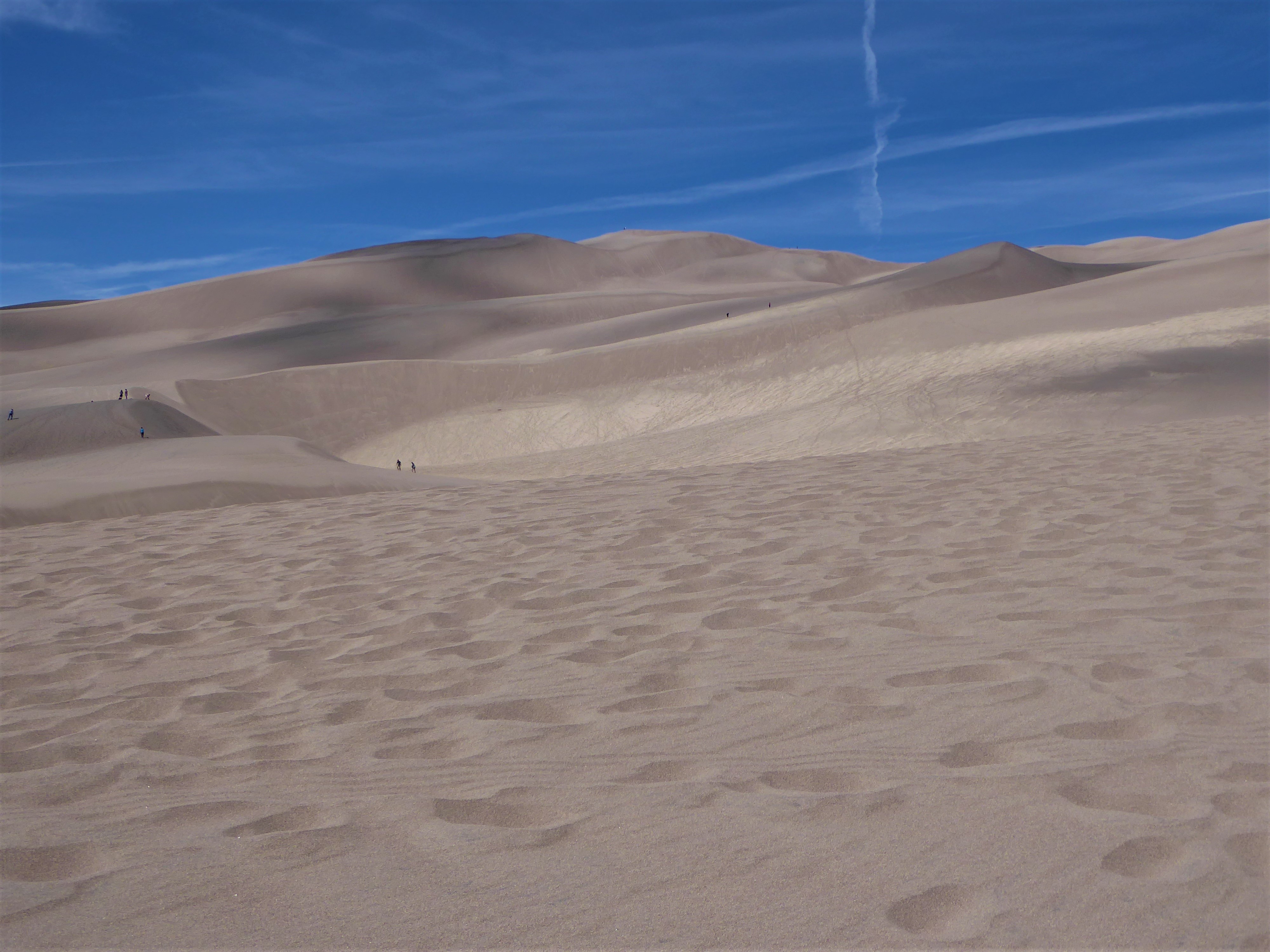 Did you know that the tallest sand dunes in North America are nestled in central Colorado? The Great Sand Dunes National Park has dunes 800 feet tall. Still, at that impressive height, the dunes are dwarfed by the Sangre de Cristo and San Juan Mountain Ranges, with peaks reaching more than 14,000 feet. The park is a three-hour car ride southwest of Colorado Springs.

Our family took a trip to the site, managed by the U.S. National Park Service, and climbed the dunes, went sand sledding, and played in Medano Creek.

Formation of the Sand Dunes

How exactly did the dunes form in the middle of an alpine forest? They formed precisely due to the perfect convergence of grasslands and two towering mountain ranges. In prehistoric times, tectonic surface plates shifting in the Sangre de Cristos and volcanic activity in the San Juan range formed boulders. In addition, glacial melting and rain wore down the boulders over millenia into sand.

Today, predominant southwest wind patterns drive the sand dunes to the east. During storms from the mountains, reversing wind drives the sand back in the opposing direction, with sand accumulating vertically and the convergence of the two. Thus, the giant dunes form, hemmed in by mountains, creeks, and wind.

Scientific explanations aside, the Great Sand Dunes impress as they climb out of a valley landscape, resting in golden hues against the snow capped mountains around them.

Getting Ready for the Dunes

We arrived at Great Sand Dunes late morning in late March. The weather in Colorado is highly unpredictable, and this is especially true in early spring. A pleasant spring morning can be followed by violent afternoon thunderstorms or a 6-inch snowstorm the next day. Fortunately, we experienced blue skies, a light breeze, and warm temperatures.

We thought about eating here, but decided instead to drive further on to the parking lot to the dunes, where we found picnic tables and benches. We ate our packed lunches while the kids began filling out the books. A couple of butterflies and some wasps flew by during our meal.

After eating, we prepared to tackle the dunes.

Although they did not seem too daunting from a distance, the dunes became more challenging as we drew closer to them. We realized that those small moving spots we saw were people climbing through the sand structures. I had originally thought we would be able to climb to the top of the peaks.

Doing online research, I discovered a earth geocache that required you to climb to the tallest dune and record your altitude at the top. Since the reversing dunes are always shifting (growing and shrinking) this altitude various daily.

Once we packed our lunch basket back in the car, I realized it was unlikely I would get our kids to the top of the structures.

After applying sunscreen, we met Texans who were just leaving. They gave the kids the circular snow sleds they had purchased to sled down the sand. They said the sleds did not work well for them, but since my kids weighed less, they might have better luck.

Sleds in hand, we left the parking lot to touch the sand.

Leaving the parking lot, we hit the sand and then had to cross Medano Creek. Formed by run-off snow from the surrounding mountain, the creek, like the dunes, changes in volume depending on when season. When we went, the creek was low and the water flow slight. We took off shoes and sock and rolled up pant legs to wade through the stream.

Then the real work began.

We walked over yards and yards or flat sand until we reached the base of the dunes. We then arduously slogged through the hot sand, clumsily lifting out feet and ankles out of the piles to the next step. It was tiring work.

My plan of climbing to the peaks ended officially. I was unsure if we could climb the low peaks, sleds, shoes, and socks, in hand in order to glide effortlessly down the slopes.

The kids begged me to carry their sleds. We stopped frequently for rest and water. I continued to look upward at those brave soles ascending the tallest dunes and admired their wherewithal, knowing the low peaks were our only friends this day.

During our rests, we tried to answer questions asked in the Junior Ranger books. We noticed that the sand was a mixture of several colors — black, yellow, brown, red, orange, white — a result of the erosion of sedimentary and igneous rocks. We looked in the skies above searching for hawks or eagles. Kangaroo rats make there home at the Dunes, so we searched for them to no avail.

Exhausted, we found a steep slope not too far up to try some sand sledding. The park advises using a sled built specifically for sand. These sleds are not available at the park but can be purchase or rented in Alamosa, about 30 miles from the park.

“Yeah, sure,” I thought, “It’s just some local tourist racket to get your money. We don’t need their stinkin’ sleds. Ours will do just fine.”

I was wrong. While our round snow sleds did work somewhat successfully, it is clear that you need a sled designed for sand for the best experience.

Our paper-thin daughter, who weighs more dripping wet than dry, was most successful, gliding slowly down most or our chosen slope. The boy got some distance, but not much speed since he weighs more than she.

I inched along and was able to see my shadow moving quicker than I was. Undaunted, I slid my rear in the against the sled, trying to get momentum, while watching my daughter pass me on her descent. Still, we were able to knock sand sledding off of our bucket list. Given the chance, however, I would go back and rent those stinkin’ sand sleds from Alamosa. It’s not a racket.

Of course, our failed sledding was a blessing in disguise. Once down slope, we had to wade through the steep sand up to our mini-summit again.

The wind was picking up, blowing sand into our faces, and we knew it would be a long walk back to the car, so we packed up shop and headed down.

After we got down off the dunes, the kids took some time to play in the frigid waters of Medano Creek.The spring run-off had not start in full force, so the water level was low. It was a great way for them to clean off all the sand from the dunes (although our son was more dirty after the creek than before).

I also purchased a National Parks Passport at the gift shop. At each national park site, I can stamp my passport with a dated stamp of that site. It provides one more fun way for our family to recall our visits to the national parks.

Of course, you’ll want to snap pictures of your visit to Great Sand Dunes. But, one word of caution. More than a year after our visit, our camera still has sand lodged in parts of the lens. we’ve tried with no luck to get rid of the sand. Whether the wind blew sand into the lens, or my son or I managed to knock the sand in is not important. You will want to take precautions with your camera.

Have you been to the Great Sand Dunes? What is your favorite National Park site? We would love to hear your thoughts. Leave us a comment below. 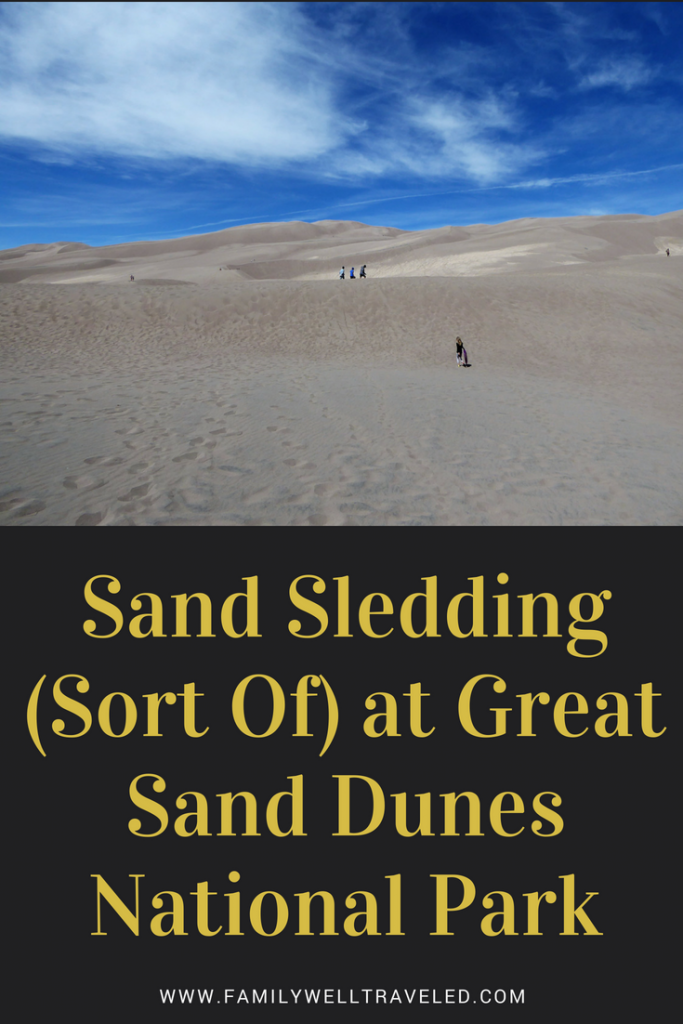