We Play Indiana Jones at a Family Archaeological Dig 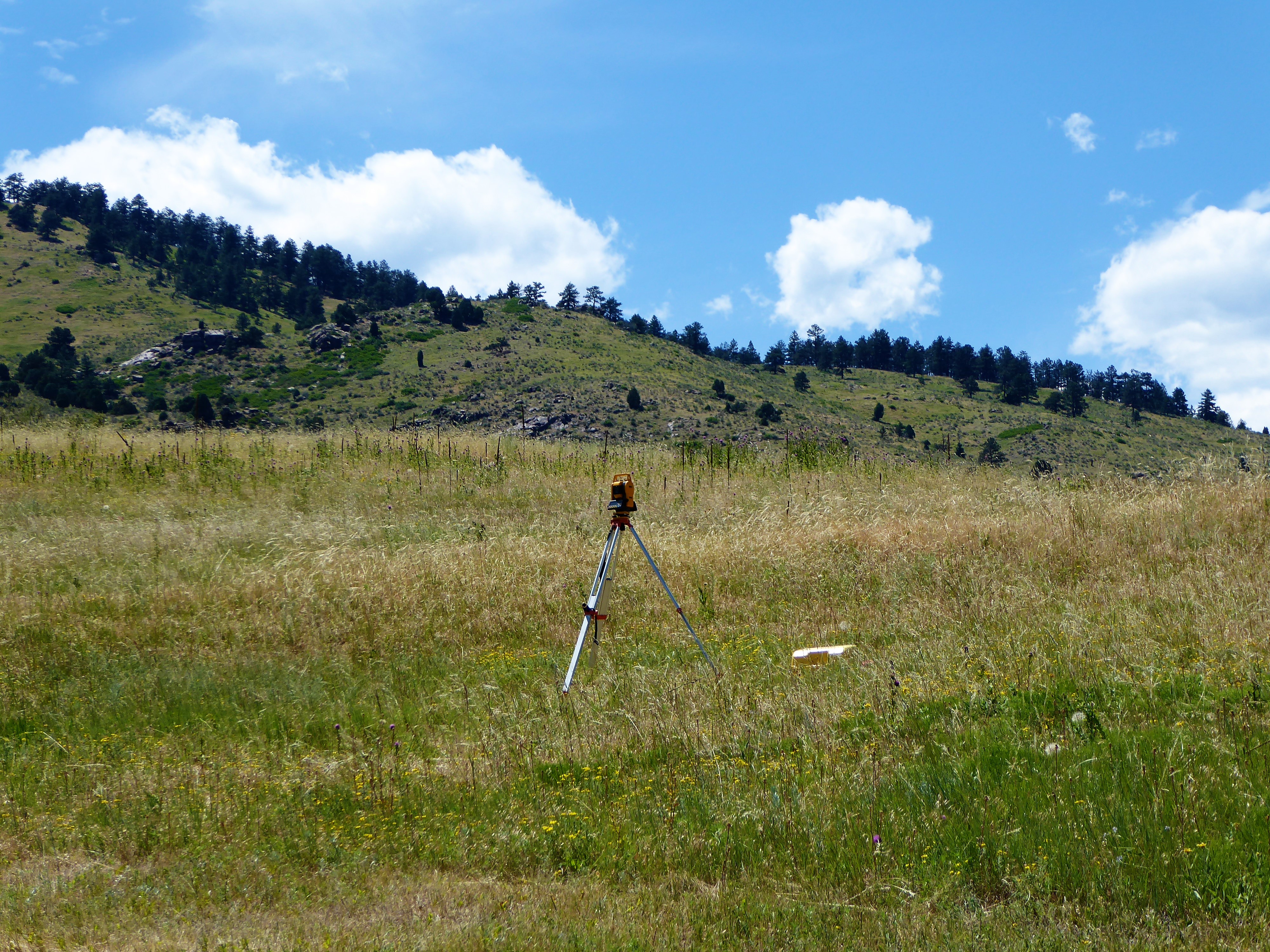 The adventure did not have the pulse-pounding action of an Indiana Jones movie (although snakes were involved). The greatest peril for us was stepping on prickly pear cactus and frantically digging before the next tour group invaded our worksite. But, we enjoyed digging up artifacts that lay buried for more than 1000 years.

So dim the lights, cue up the theme music (come on, someone write us some theme music), and take a peak at our adventure.

The dig site is the project of the Denver Museum of Nature and Science in conjunction with PaleoCultural Research Group. Archaeologists researched the site since the 1950s and again in the 1990s. The museum started new digging in 2016 using modern technological resources.

While it is an active scientific dig site, the museum allows public participation. We got free passes for the tour and dig through the museum’s website. High school interns work alongside experienced scientists to uncover artifacts from the Early Ceramic Period (200-1000 AD). We, too, with trowels in hand, worked diligently to uncover tools used by the hunter-gatherers who lived in this region.

The site lies in the foothills of the Rocky Mountains. The area lies on a route used by pioneers in the 1800s. However, evidence unearthed from 7,000 years ago suggests that the region was populated and used well before U.S. immigrants settled Colorado.

The museum works closely with local Native American people to better understand the history of the area. Native Americans share stories and oral traditions handed down for generations that shed light on the peoples who lived here thousands of years before European settlers.

Piecing the history together is difficult. It has become more difficult, however, with site looting. Unfortunately, a Denver journalist wrote a story in the early 1900s stating there were artifacts at the site. Looters were quick to gather up those artifacts, leaving an incomplete story of the area. Archaeologists believe the looters pilfered the top layers of the site, erasing 1,000 years of artifacts and evidence.

What we do know is that the ancient peoples thrived in the area. Unearthed finds include ancient ovens, projectile points (like arrowheads, although this group did not use bow and arrow), and mortar and pestle pottery. The groups had abundant wildlife and vegetation at their disposal. Evidence suggests that this gateway to the Rockies may have been an ancient trading route, as pottery artwork shows patterns similar to those found by plains people and those of the desert southwest.

We arrive at the Apex Park Trailhead ready for adventure and something different. Tired of our normal day-to-day routine, we anticipate great discoveries. An archaeological dig has long been on my bucket list (although I figured it would involve searching for dinosaur bones with my kids).

My curiosity it peeked. Is there a possibility of finding ancient human remains? Will our family be responsible for shutting down the site while those remains are reported to the proper authorities?

You can follow the dig on social media by searching #DigMagic

We meet our tour directors and the teen interns working at the site during the summer. Our family are the only members of the “public” on this tour. What incredible luck.

We take off along the trailhead. Our guides warn us to watch out for bicyclists who whip by on the trail. Also, keep an eye out for snakes (we don’t see any) and cacti.

After a slight hike up a hill, we can see Denver in the valley below. We also see frolicking butterflies by the dozens. The grassy hillside is the perfect environment for them. The guides tell us about the recent history of the region, the founding of the Magic Mountain Amusement Park, an abject failure from in the early 1960s, and the early scientific research in 1959 and the 1990s. A weathered sign marks the location of the dig site, which is one of the most archaeologically significant finds in Colorado.

Scene 3 – The Descent to the Dig Site

We have now reached the apex of our walk, and head down to the dig site. During the walk we make several stops, learning more about the ancient residents and the women archaeologists who have led the digs. Yes, women led all the digs, so we spend a brief moment celebrating Girl Power.

Since this site is culturally significant to so many peoples, we learn about the close collaboration between the museum’s scientists and Native Americans. This year, a Ute tribal elder blessed the site in an opening day ceremony. Those in attendance said it was a moving and meaningful experience.

We finally reach the dig site, where we see the cemented datum. The datum is a fixed marker, representing the starting point of the 1990s site excavation. Cynthia Irwin-Williams’ original 1950s datum is lost. The datum is a grid from which the site is explored in meticulous detail down to the centimeter.

Finally, we learn about the recent dig. We see a topographical picture of the area, where advanced instrumentation detected dig hot spots. Some of those hot spots were dug up and reburied previously. We learn that after a dig site like this one is uncovered, its artifacts are cataloged and then reburied in as precise a way as possible. So the previously unearthed ancient ovens are reburied in the location they were discovered.

Our tour guides hand us off to our next guide, who walks us to our small roped-off ground. It is about 3×3 foot, next to an adjoining 3×3 foot plot. The ground is sifted away in 10-centimeter increments. Our job is to keep digging down on our plot so that it is even with the adjoining plot.

That is not an easy job. You cannot simply take a trowel or shovel and burrow down deep. Instead, we mUst use the edge of our trowels to scrape the dirt away millimeter by millimeter. Once a small pile of dirt forms, we scoop it into a 5-gallon bucket. The bucket’s contents will go through a sifter later.

At this point, our son’s dreams of finding something momentous are dashed. Importantly, our kids learn how painstakingly arduous and slow the work of archaeology can be. Throughout our tour, we have seen our guides burst in excitement when told that someone uncovered a projectile point on a plot they had worked. Now we understand that excitement. A major discovery could take weeks to confirm with this detailed excavation. Since most of these plots become six-feet deep hole, we know that any find deserves a shout.

Unfortunately, time is not on our side during the dig. The next tour group quickly approaches the plot, and we must rush our digging and leave our site soon. We make some last attempts at scraping away the hard packed earth, drop it in our bucket, and head to the sifting site.

My wife and I would have liked more time at the plot. In retrospect, it was probably best that we were not here long. Our children’s patience would be tested too much if left here longer. They would be frustrated spending a lot of time digging without discovering an object.

We take the bucket to wire mesh sifter. We dump the contents of the bucket on the sifter. Next, by hand, we grind the larger dirt lumps carefully through the mesh, breaking up the clumps.

While we do not have big objects, we do find some rock that was used either as a sharpening tool for a projectile point, or as an instrument for ancient use.

We feel rewarded knowing that we found those small pieces, buried for a thousand or more years.

Our guide bags the finds. They are sent to the Denver Museum of Nature and Science, where they are cataloged and tested. Our artifacts will help tell the story of the people in the Early Ceramic Period.

OK. So it wasn’t a heart-stopping, hold-your-breath adventure. No Nazis lost their lives when the artifacts were revealed. We were not thrown into a pit of vipers, nor did we run from a massive boulder rolling dangerously toward us. Still, we left Magic Mountain thoroughly entertained and satisfied with a great tour and fun, though not momentous dig.

Would we do it again? Absolutely. The short dig whetted our appetite for more.

Maybe next year we can be part of uncovering something that changes what we know about these ancient people. Maybe we’ll travel to another state or country to participate in another dig.

Will we dig at ancient civilizations sites? Or maybe unearth dinosaur bones? Will we make a discovery that changes history?

Write the script for us. Tell us where we should go on our next family archaeological dig. Leave a comment below. 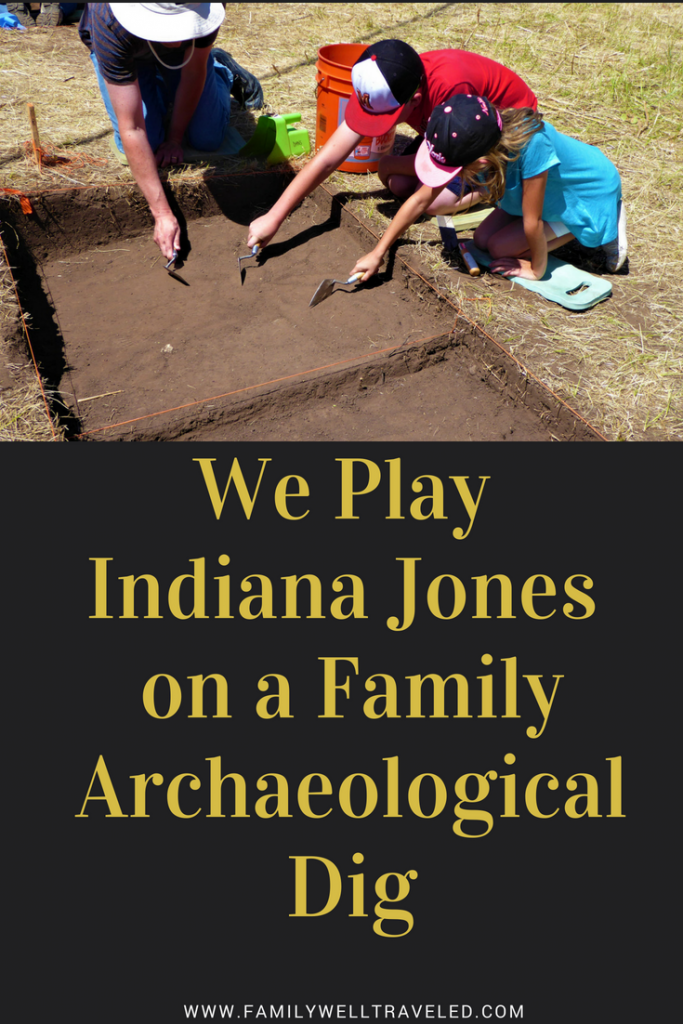