We Vacationed in Nebraska and Found More than Corn 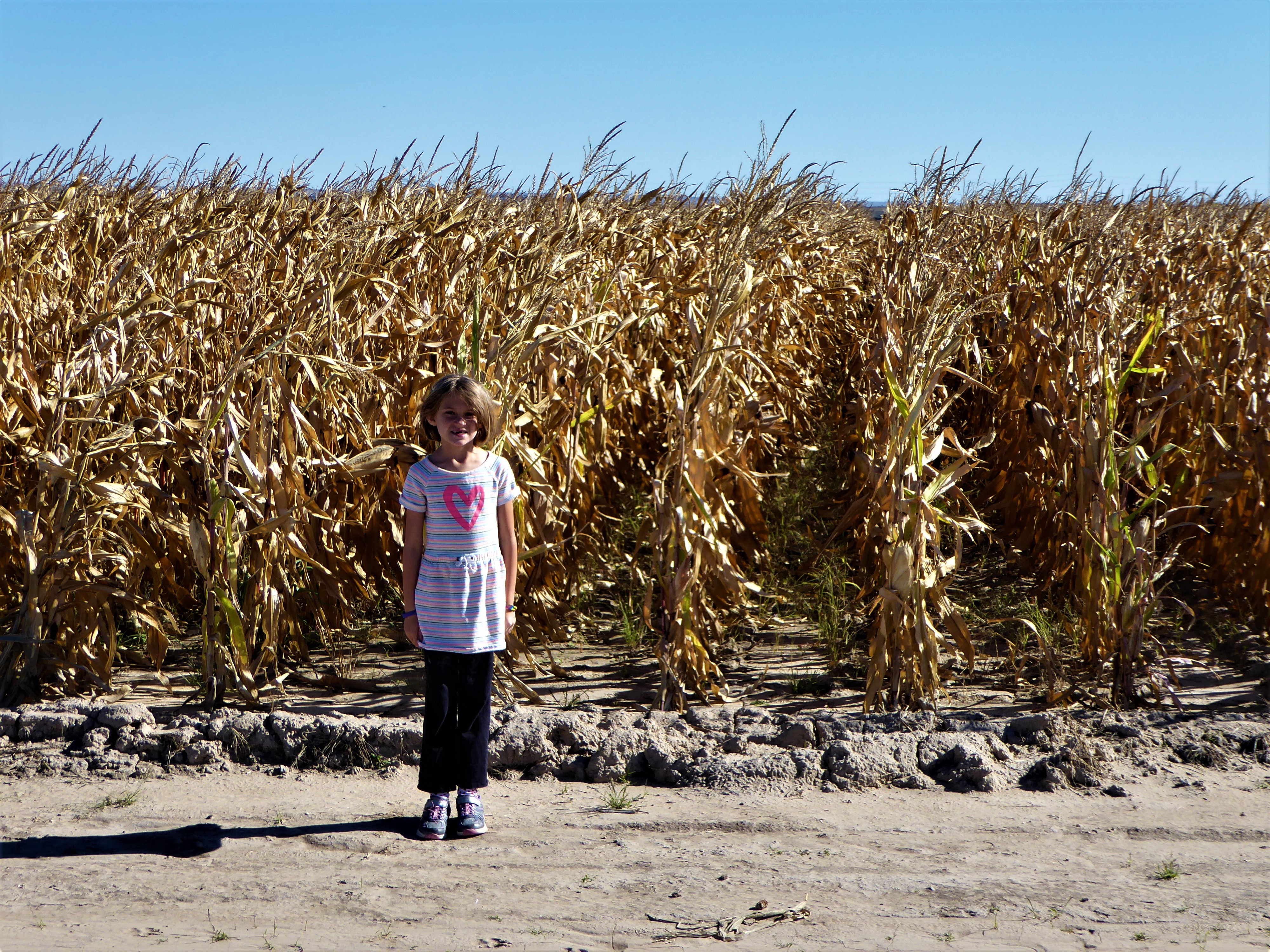 When you think of special vacation destinations, Nebraska probably is not on your list. I admit that I don’t think of Nebraska as a traveler’s Mecca. Yet, our family planned a road trip to Western Nebraska during fall break and found that there is more to Nebraska than corn.

Why a Nebraska Vacation?

Our trip grew out of a family vacation this summer to the Black Hills of South Dakota. We hate to take the same route coming and going on a road trip, so I often map out different routes or options. I considered dropping down to Nebraska after leaving the Black Hills. I found a couple of National Monuments to visit. However, in the end, we chose to take a different return route.

My son was disappointed that we did not go to the state and began to ask that we plan a trip to Nebraska. I decided fall break would be a good time (as long as it didn’t snow), and began plans.

Our kids love the National Park Service and look forward to collecting Junior Ranger badges at each park location (to find out more about the Junior Ranger program, check out our post here). Western Nebraska offered two NPS sites (Agate Fossil Beds National Monument and Scotts Bluff National Monument) in addition to one National Historical Site that is not governed by NPS (Chimney Rock National Memorial). Our itinerary was set for a quick two-day journey to these three sites.

You need to understand that Western Nebraska is sparsely populated. Scotts Bluff is the largest town in the region. Much of the time, we were driving an roads where we saw no traffic.

Our first stop was to Agate Fossil Beds National Monument. The site was the most remote of our stops. The NPS’s website notes that there are no gas stations for 30-50 miles and sporadic cell phone service. We passed three cars on the 30-mile journey on the road to the monument.

Mammal fossils from the Miocene Epoch (20 million years ago) were uncovered in the 1890s and Agate Fossil Beds became a hotbed of paleontologist activity. The area was a savanna-like grasslands complete with a watering hole. When the land dried up, the mammals died. leaving their remains. You can see the remains of animals that resemble our modern-day pigs, gazelles, camels, and rhinoceros.

The park also contains a ranch house and the James H. Cook collection gallery, which preserves the cultural history of the Lakota people. There are two walking trails that are easy to moderate. One trail has a walking path that is accessible for wheelchairs.

We enjoyed a nice picnic lunch at the park and walked some of both walking trails. The kids completed their Junior Ranger books and earned badges. We enjoyed the gallery and admired the Lakota artwork and learned about their history. While the park has a lot to offer in terms of leaning about the region and the Miocene fossils, there is little to do (besides the walking trails). We spent about two hours at the park, and the kids were ready to leave and go to our next destination.

Next up was a 90-minute drive to Chimney Rock, the iconic natural structure that was a landmark for more than 500,000 emigrants following the Oregon Trail, the California Trail, and the Mormon Trail in the 1800s. Chimney Rock, though a national historic site, is maintained by the Nebraska Historical Society rather than the NPS.

The site has an interactive visitor’s center where our kids immersedthemselves in the history of the 1800s wagon trains. They were able to load a wagon with sugar, water, rice, coffee, and other commodities. They learned about the pioneers who journeyed to Chimney Rock and beyond.

Outside the visitor’s center is a photo station where you can take pictures of the 300-foot-tall rock formation that has been immortalized on the U.S. Mint’s State Quarter series. Access to the rock was disappointing. We were a distance from the rock and were unable to get the best pictures. I later read that there is a trail that allows closer access to the site that is a short drive from the visitor’s center.

While we learned about the Oregon Trail and the pioneers at the site, we would recommend that you find an off-road stop if you simply want pictures of Chimney Rock,

After this stop, we headed to our Hampton Inn Hotel in Scotts Bluff for an evening of swimming and rest.

The next day, we got an early start at Scotts Bluff National Monument

The Bluffs were, after Chimney Rock, the second great landmark the wagon trains saw on their trek westward. More than 250,000 pioneers traveled through the pass on their way to Oregon. Today, the bluffs preserve the history of the pioneer and the Pony Express (which ran through the pass) as well as being a popular hiking spot. Scotts Bluff rises 800 feet over the North Platte River and the town of Scotts Bluff. The rock formations inspire photographers.

The staff at the visitor’s center was helpful and accommodating to the kids. We entered an auditorium where a Ranger told us the history of the Monument. He showed us the works of William Henry Jackson, a naturalist photographer and artist who was the first person to photograph Yellowstone. Outside the visitor’s center, you find a short trail with wagons and gorgeous views of Mitchell Pass.

You are able to drive up to the bluffs on a narrow, switchback road, which leads to some hiking trails and views of the North Platte River and surrounding countryside. From the top of the Bluffs, you can see Chimney Rock and some other rock formations that dot the Western Nebraska landscape.

The Monument is a must see for those interested in the western expansion of the United States or the outdoors person who loves hikes and mountain vista views. We spent about two hours at the site, but you could easily spend half a day exploring all of the monument.

Western Nebraska was a surprisingly enjoyable vacation spot. The kids enjoyed Agate Fossil Beds and I enjoyed Scotts Bluff National Monument for its stunning scenery.  It is economical to visit the sites (Agate Fossil Beds is free, Chimney Rock is $3 for adults and free for children, Scotts Bluff is $5 for a non-commercial vehicle). Scotts Bluff has a number of hotels with very reasonable rates and a good number of restaurants and fast food options. We learned a great deal about the wagon trains and the Miocene era on the trip and enjoyed bonding as a family.

Have you visited Nebraska or these Monuments? What were your impressions or recommendations? Leave us a comment. We’d love to hear from you.

Our Trip to Amazing Colorful Rocks at Paint Mines Interpretive Park in Colorado.

Find out 4 Things You Can Do at Capulin Volcano National Monument.

Read about Three U.S. Forts that Tell the Story of Western Migration. 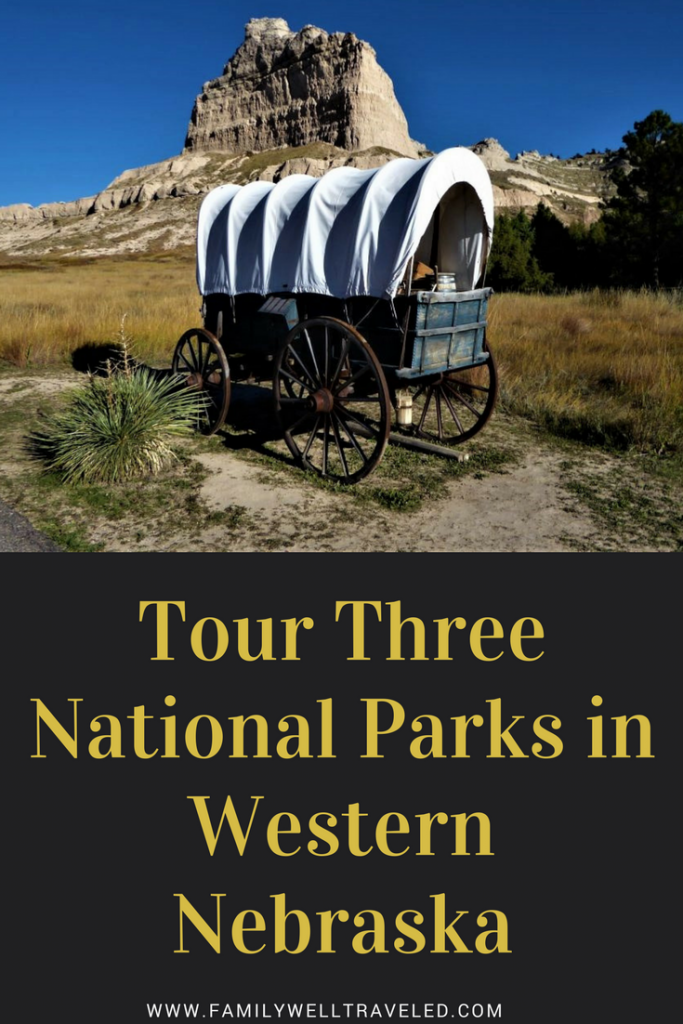