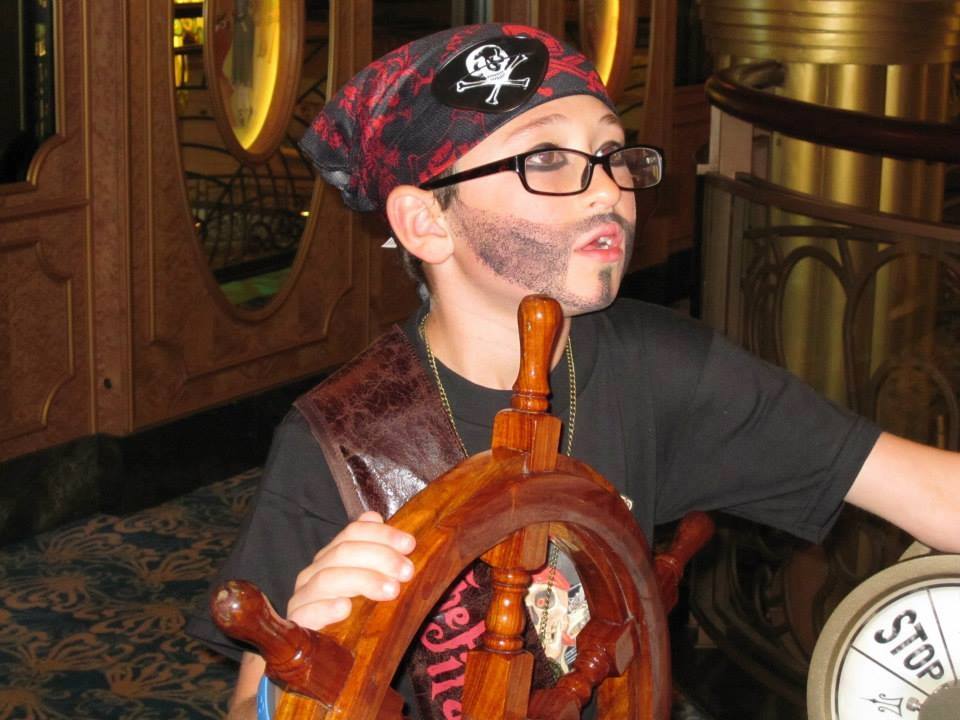 Behind every perfect Instagram picture is a story. The story is often more interesting than the picture itself. We have shared how we have struggled through some travel experiences in order to get that Insta-worthy photo here. But, what happens when you are traveling and get sick. We know what it is like. Here are some stories of our sick travel mishaps.

That Time When We Cruised through a Tropical Storm

Our favorite type of vacation is a cruise. What could be better than getting on board and having someone else drive you to destinations, clean your room, and cook your food? However, it’s not always as great as it seems.

We have cruised in the calm waters of the Caribbean Sea. And we also have cruised in the more choppy waters of the Atlantic and Pacific Oceans. On one Atlantic Ocean cruise, our ship sailed through a tropical storm. Throughout the day, we felt the swell of the waves rock the ship. The captain’s noon-day report alerted us that the sea would be rough. But, we had no idea how rough.

Our dining room was aft. Here, we found more pronounced choppiness. This night was especially jarring, leaving us feeling slightly queasy. After dinner, we headed to the showroom at the front of the vessel for an entertaining musical showcase. We laughed as we tried to climb the stairs to the showroom, only to find ourselves moving more horizontally than vertically due to the tossing of the waves. After sitting in the showroom for a few minutes, my wife felt quite seasick and excused herself to our cabin.

I decided to ride out the storm and watch the show. Dancers fell all over the stage in much the same way that we traversed the staircase. Many in the audience left throughout the hour-long show due to sickness. Cruise personnel came through the aisles with barf bags.

Most alarming was watching the assistant cruise director trip out of the showroom, barf bag pressed to his mouth. The few of us who made it through the show were told that we were expecting a full-night of rough seas. I made my way to our cabin to find that personnel had strategically taped barf bags next to the elevators for guests (and a few staff as well).

My wife spent all night, and half of the next day in bed. We ordered room service the next morning, and waited a long time for our food because the room service staff was swamped with requests. It was one of the more miserable nights we have spent on vacation.

But, There Are Other Cruise Disasters

Since we didn’t want one poor experience to upset our love of cruising, we booked another cruise in the Caribbean. This was our first cruise with our kids, then ages 6 and 4. We had hyped up cruising to our kids, hoping they would love it as much as we did.

The first night of our cruise, I ate a dish with peas. The peas did not sit well on my stomach and I fell violently ill. I spent all night in our cabin bathroom.

Anyone who has been on a cruise ship knows that the walls between the cabins are thin and sound travels too well. I was so self-conscious about being sick and about keeping quiet so the other guests could not hear me. We don’t know if the other guests heard, but we know that both kids slept completely through the night (lulled by the gently swaying of the waves).

The next morning, I was feeling slightly better, but I needed to launder my clothes. Fortunately, your cabin steward can launder your clothes for you. Although really embarrassed that our steward had to take the clothes, I knew it was the best option.

What I didn’t know is that he would not only launder my clothes, but also press them. All of them. Including my underwear. I was mortified to find my freshly laundered and pressed clothes in our cabin two days later.

I got better throughout the trip and we were able to enjoy two fun shore excursions, including swimming with dolphins. We had the special treat of being in a maternity pod, with a mommy dolphin and her baby. But, we won’t soon forget that awful night in the bathroom.

Sick with the Mouse

We planned a family reunion at Disney World. Our kids were 2-years-old and 9-months-old. We lived on the West Coast of the U.S. and had to fly to the East Coast, which was a big, hairy adventure for us. But we did it.

Soon after arriving in Orlando, I became violently ill. Fortunately for me, I was sick while in a two-bedroom timeshare instead of a cramped ship’s cabin, but I was still sick.

Our plan was to go to the Magic Kingdom that next morning; however, I was in no shape for such a trip. I told everyone to go without me, but the family insisted that they could wait a day. As the day wore on, I was unsure that I would be better by the next day.

I did get better and we were able to enjoy the House of Mouse the next day, although I wasn’t ready for any speedy or turbulent rides. Let’s just say that the kiddie rides were enough for me that day.

Most of the family planned to spend the entire day at the park, which closed at midnight. Since our children were very young, and since I was not feeling well, my immediate family cut our trip short and left early. This was not my favorite Disney adventure.

Hey, Don’t Leave Our Son Out

We love to trade cruise illnesses, apparently. On another family cruise, our son got sick at sea. We were on a Disney Cruise Ship and we were in port in San Maarten. Our son woke up not feeling well. We did not have a shore excursion booked for the day, but we had plenty we wanted to do.

When we got off the ship, our son complained that he was hot and didn’t want to walk. We didn’t think much of it at the time, but his complaints continued. You could see that his face was flushed, and when we checked, it felt like he was running a fever.

We still tried to press on, but he got progressively worse. We quickly decided to go souvenir shopping for the kids and head back to the ship.

Our plans to go to Maho Beach and watch the planes land at the nearby airfield were quashed. Fortunately, we had not purchased any shore excursions.

We got our son medicated and he struggled through the rest of the day, which happened to be Pirate Night on the cruise ship. He was a trooper and got dressed and made up as a pirate, but our evening was a short one.

The next morning, he was much better and ready to go on shore in St. Thomas and continued to improve throughout the remainder of the cruise.

And the Little One Always Gets Car Sick

Our daughter often gets car sickness. She’s been ill on short trips, and especially on longer trips. Part of it might be an excitement about going to new places.

We planned a Thanksgiving trip to my sister-in-law’s house, a nine-hour drive. We were traveling with my in-laws in a rented van. It was a cold November morning with fresh snow on the ground. We were about 45-minutes into our drive when our daughter said that she was feeling sick. Before we had time to open some windows and circulate cool air (which often helps her), she threw up all over the back seat and on her clothes.

We had to pull over to the side of the road, unpack our luggage to get her a change of clothes, and clean up as best as we could. Our poor daughter had to change on the side of the road with her bare feet in snow. Since this incident, we always pack some extra plastic bags and baby wipes on a road trip, just in case she gets car sick.

Here’s hoping that we don’t have any more vacations involving sickness. But, given our track record, this may be too much to ask.

Can’t get enough of our travel foibles? Check out Travel Mishaps Part 1.

Laugh with us as we attempt sand sledding at Great Sand Dunes National Park.

Have you had a bad travel experience? We’d love to commiserate with you. Tell us your story. You also can follow us on Instagram, Facebook, and Twitter to see future travel worthy photos. We promise to tell you the story behind the picture — warts and all. 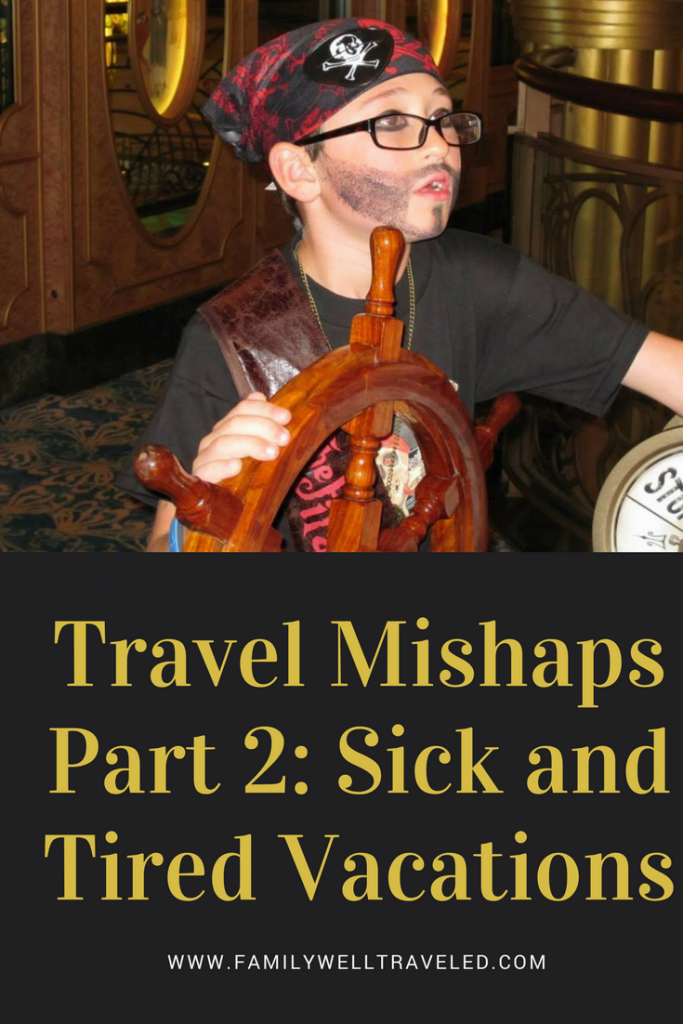