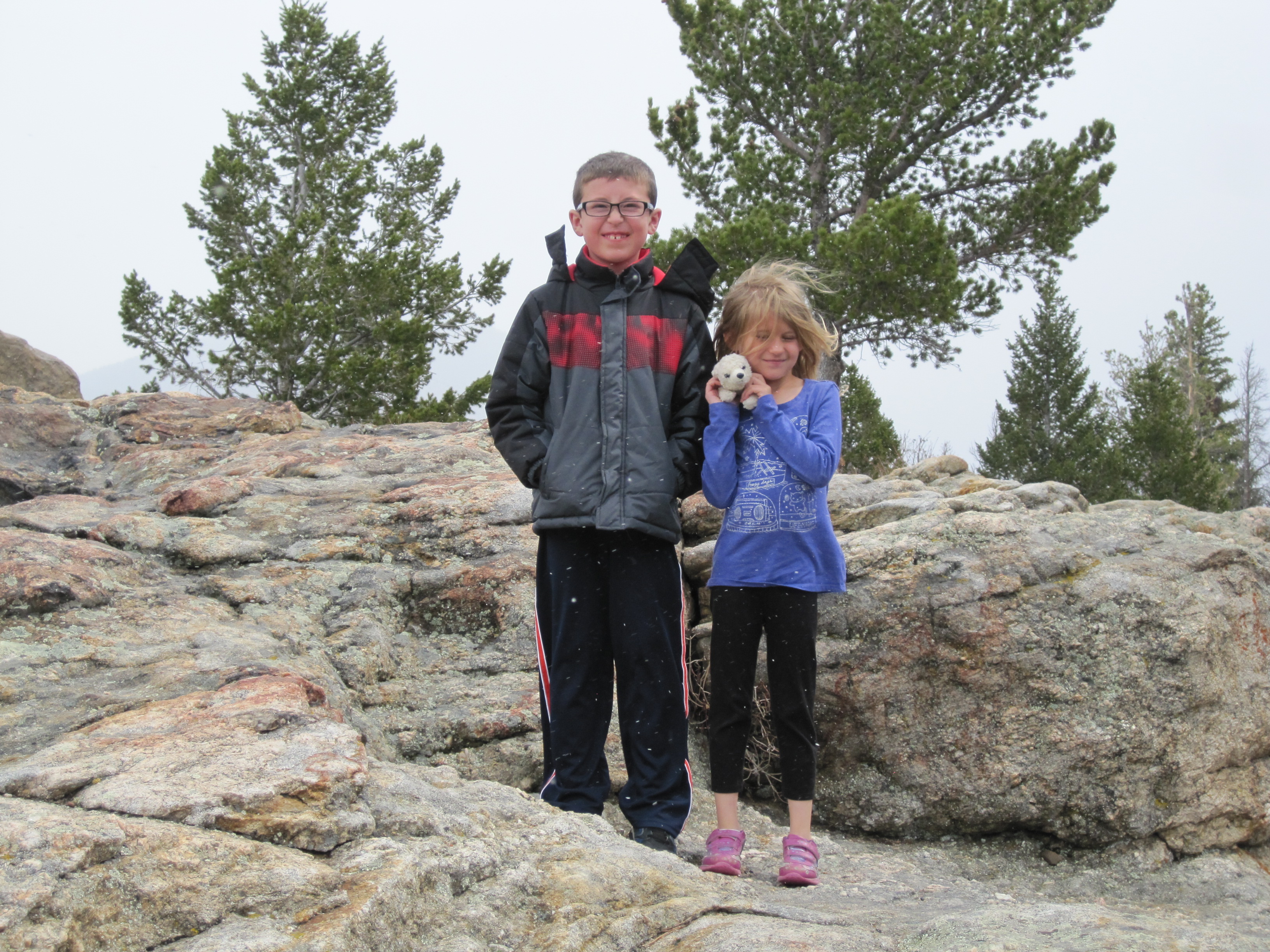 We are family travel bloggers. Our lives and adventures are out on the Internet for anyone to see. Of course, we like to share the great things, but we’d be the first to tell you that some of our trips have been disasters. Hopefully, we have learned from those disasters.

We thought it would be fun to share some of those travel mishaps and the lessons we learned from them (hopefully). After all, the perfect Instagram picture may get a lot of likes, but the journey to get that perfect picture can be just as fun.

I had the perfect plan. I wanted to surprise my wife with a Valentine’s Day getaway. Everything was planned.  I booked the flights, rental car, bed and breakfast, everything. She knew only that on a certain weekend, I had something special planned.

I had booked a flight to Little Rock, Arkansas. We headed to the Crater of Diamonds State Park in Murfreesboro, Arkansas to go diamond hunting. What could be more romantic than digging through the dirt and discovering our very own diamond? We learned about the park and talked about a trip there, and I had made plans for the perfect weekend getaway.

The morning we were to drive to the diamond park was cold. We figured it would warm up by the time we made it to hunt for our diamond. That never happened.

It was about 35 degrees Fahrenheit when we entered the park. We tried to make the best of the situation, making our way to a recent upturned dig site. Reading the white board, we knew that a two carat diamond was found five days previously. We knew we’d be the next to find a diamond.

But that cold air was really cold. There was a constant wind making the conditions feel even colder.

We filled our buckets with dirt and sifted the soil through a shaker. Then we sent the sifted soil through frigid water troughs to shake off excess dirt (a process similar to gold panning). The icy water hit our jackets and shirt sleeves as we shook the sifter. Soon our shirts, pants, and shoes got wet.

The temperature fell, and we continued to sift through our buckets of dirt. But we were miserable. After about 30 minutes, we called it quits. No diamond was worth frostbite.

Unfortunately, we have too many examples of trips ruined by cold weather. My wife surprised me with a trip to Colonial Williamsburg, Virginia as a Christmas gift. We traveled to the colonial town in January, and, you guessed it, we froze while walking through the streets where George Washington and Thomas Jefferson had once walked.

Lots of our pictures from this trip are inside the buildings, because we always tried to come in from the cold. We may have shown more interest in Colonial publishing or blacksmithing than we actually felt in order to hold on to the heat from the fireplaces inside those buildings.

The Winter of our Discontent

Another time, we planned a family trip to Rocky Mountain National Park. The park had free admission for the 100th anniversary of the National Park Service. We packed our car for the drive to the park, and fortunately packed heavy winter coats. The drive was sunny and warm, but as we approached the park, it grew cold and then started to snow.

By the time we got to the entrance of the park, we were wearing our coats and driving through a full-force blizzard. We still tried to make the best of the day, searching for wildlife with the kids and trying to marvel at the 14,000 foot mountain peaks. But, the animals were hunkered down for the storm and the peaks were covered with clouds.

During the drive, our daughter needed to use the restroom. We found a restroom for her, but she could not open her car door due to the force of the wind. My wife helped open her door, and had to hold on to her on the way to the restroom because the gale force winds threatened to knock our 30-pound daughter over. Both of them struggled to walk through the storm, their bodies at a 45 degree angle to make their way to the facilities.

We ate our picnic lunch in the car at the visitors center. There were a few animals, but we were unable to see moose or bighorn sheep, which we had most hoped to see that trip.

We called it quits. Leaving the park, guess what we found? Sunny skies and warmth. Apparently, the blizzard was only in the park. We could only laugh as we later saw cloud covered peaks to our east where the park stands.

But, hey, it was free admission.

Who Knew San Diego Was This Cold?

What about that time when we booked the timeshare in San Diego in April? What could go wrong with an April trip to San Diego? Plenty.

San Diego is temperate 51 weeks of the year. But that 52nd week? It’s cold and windy with a frigid rain. And that’s the week we planned our trip. We took the family to the San Diego Zoo and Disneyland. We also planned to spend a great deal of time at the resort at the outdoor swimming pool.

That didn’t work out. Our visits to the zoo and Disneyland were great. Our trip to the beach? Never mind, it was too cold. And our time at the pool was miserable. I had to take our daughter back to our room. She was shivering and her fingers and nose turned blue.

The Storm to End All Storms

We planned a holiday drive to St. Louis to visit family. Of course, the day before we were to leave, a violent ice storm hit the St. Louis area. The ice knocked down power lines throughout the city, leaving most of the city without electricity and heat. Electricians from around the country arrived to the city to restore the power. Those without power in their homes booked hotel rooms that had electricity and heat.

Our drive to the city was treacherous. However, the trees, covered in ice, made our drive amazingly beautiful. It’s a memory that is still fresh today, ten years after the event. We made it to our destination without incident (although it was a long, slow drive) and made our way to the hotel.

At our hotel, we found no parking. Electric service trucks littered the parking lot. We headed into the lobby to find what seemed like the entire population, searching for rooms. Unfortunately, the city had arranged to house the electricians coming in from out of state, pushing those who checked in late out of their rooms, with no other accommodations to be found in the city.

We arrived just in time to secure our room, although we were told that the hotel staff was preparing to release our room to a traveling service person. We were lucky. The people behind us in line were not so lucky.

Have you had a bad travel experience? We’d love to commiserate with you. Tell us your story. You also can follow us on Instagram, Facebook, and Twitter to see future travel worthy photos. We promise to tell you the story behind the picture — warts and all.

We have plenty more Travel Mishaps. Read about our Sick and Tired Vacations.

OK. All of our trips are not disasters. Take a look at some of our Great Family Travel Photos. 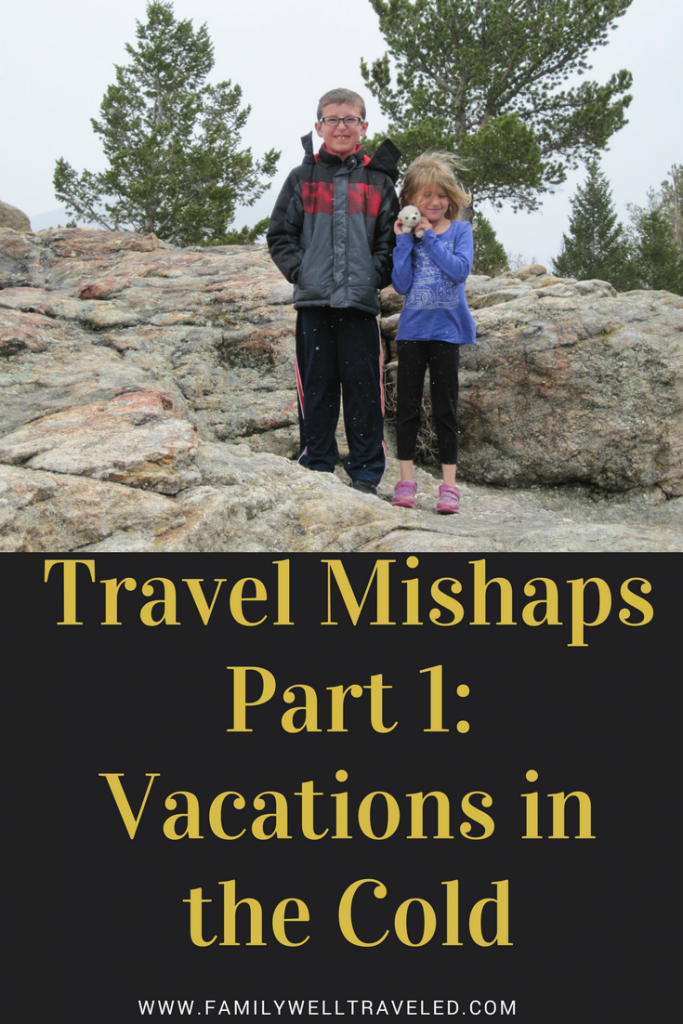 29 thoughts on “Travel Mishaps Part 1: Vacations in the Cold”