I am a planner when our family travels. I will research for weeks, determining activities and locations we must visit on our journeys. Sometimes, I include remote, off-the-beaten-path locations which we can visit if there is time on our trip. Such was the case with Yucca House National Monument. When my kids and I traveled to the U.S. Four Corners, I researched Yucca House and considered it a possible destination. After a friend I’ve known since elementary school recommended the national monument, I knew we had to go. We were not disappointed.

Yucca House National Monument is truly off the beaten path. Simply getting to the monument in southwestern Colorado is an adventure. The directions to the site as listed on the National Park Service website read:

“Currently, there are no signs directing you to Yucca House. The monument is surrounded by private land. Once you leave the main highway, the road to Yucca House becomes gravel or dirt, which may be impassible in wet weather. You may need to pass through livestock gates and close them behind you.”

Yucca House is one of the most secluded and least visited sites in the National Park Service. Accurate records are difficult to find, since there is no Ranger meeting vehicles and people as they enter the site. One simply signs a guest book which includes date of visit and members in your party. However, I found records indicating around 300 visitors per year. This seems accurate since we were the only visitors on the day we went, and the previous visitor arrived three days before.

This seclusion is the primary reason I enjoyed our visit to Yucca House National Monument. The kids and I felt like explorers and archaeologists finding our own newly discovered ancestral Pueblo site. It didn’t matter that the sign outside the gate informed us that the site was designated a national monument in 1919.

What is Yucca House National Monument?

Yucca House is an un-excavated ancestral Pueblo site. Discovered in the late 1800s, the U.S. government designated the site a National Monument in 1919 and determined the site would remain buried. Although the majority of the site is buried under hundreds of years of sediment, some of the ancient brick structures are exposed. As you walk along the grounds, you stumble upon pottery shards and tool fragments.

The monument is separated into two regions, and it is essential that you research before you go so that you do not miss the larger, less visible section.

Our Trip to Yucca House

After my friend’s recommendation, the kids and I looked forward to a trip to Yucca House. We visited the monument after a trip to Mesa Verde National Park, which is about an hour’s drive from Yucca House. The sister sites are both maintained by Rangers from Mesa Verde, although Yucca House has no Ranger services. In fact, Yucca House has no services of any kind (so use the restroom and fill your water bottles before setting out for the site).

I printed the directions provided by the NPS website, which were very accurate. NPS advises that you not rely on GPS to arrive on site. And since their directions are accurate, don’t tempt fate.

We left Mesa Verde and drove along Highway 160 through the town of Cortez. Approximately eight miles outside of Cortez, we turned on County Road B (identified with a small green sign). We drove on this dirt road for 0.8 miles, until we passed a paved road. Then, according to NPS directions, “Take the next dirt road on the right before the farmhouse on the left. (As you make this turn, you will cross a yellow cattle guard and pass a Box Bar Ranch, No Trespassing sign. The “no trespassing” sign does not apply to the county road.)”

I just loved this. The kids and I felt we were on a grand adventure. Yet, we still had not arrived. We had to follow the road north and west for 1.4 miles, heading toward “the white ranch house with the red roof on the west horizon.” We were on a fully functioning cattle ranch. We drove by dozens on cows and calves. Some of the cattle nonchalantly walked in front of our path or hung out a step or two from the road. I drove slowly and cautiously through the ranch.

Once we reached the ranch house, we found a fenced area to the south and we parked on the left side of the ranch house. NPS instructs visitors to “Please be courteous toward the private landowners and close all gates behind you as you enter to prevent livestock from escaping.” Clearly this isn’t your average National Park Site.

Once parked, we followed a boardwalk to a small gate leading into Yucca House. A sign reminded us to close the gate behind us. Next to the gate is a box containing a guest book to sign in (which helps rangers determine the number of visitors).

We had arrived. And we had a fun story to tell about the drive to the park to boot.

The Mound We Discovered at Yucca House National Monument

As we entered (and closed the gate behind us), we discovered a large mound to our left. This mound is the only obvious sign of a previous civilization in this region. Although the protruding mound is noticeable, this brick structure actually is part of the smaller of the two sections of the monument.

My son immediately walked to the mound, looking at and touching the brick structures now covered by sediment and sage brush. The mound, known as Lower House, is a L-shaped pueblo with at least eight one-story rooms. The ancestral Pueblo built homes and structures right next to each other, so a structure like this may have been the home for one family, or a home for an extended family.

Taking objects found within the monument is legally prohibited. Look, admire, and leave all object on site.

Estimates date the Pueblo to 1150-1300 A.D. These are the dates when archaeologist feel the Yucca House community thrived. The community depended on the springs from a underground on-site source, providing a water supply for vegetation. The community of farmers utilized the spring in the arid desert southwest.

Other Discoveries at Yucca House

After looking at the mound, we walked around this lower portion of the monument. Here we discovered some smaller rock formations, and some shards of pottery and flint, most likely used for making hunting weapons.

In addition to the sagebrush, we also stumbled on a good deal of cacti, yucca, and wild grasses. Since we visited the site in early spring, much of the vegetation was blooming and turning green after a winter of rest.

We found many signs of wildlife in the area. Animal mounds prevail throughout the monument, and provide homes for rabbits, squirrels, and rattlesnakes. Yes, do beware of rattlesnakes while at Yucca House. They are prevalent throughout the region, and since Yucca House is sparsely visited, they startle easily and strike.

We thankfully did not see any rattlesnakes during our visit. We did, however, find animal bones. And to my daughter’s great disgust, we discovered a couple of active ant hills. When she found ants climbing over her shoe, she was more than ready to leave the site.

Unfortunately, my daughter’s anxiety to leave prevented us from visiting the western section of the monument. This section, further up an incline, housed the larger Western Complex. This is the Upper House, with as many as 600 rooms and 100 kivas. However, the Upper House, covered by centuries of organic debris, leaves the structures from view. Still, you may spot pottery shards and other tools made by the Ancestral Pueblo.

The first modern archaeological study of Yucca House, written in 1878 by William H. Holmes, described the immense dwellings around a spring. Archaeologists at the time mistakenly assumed that the Aztec populated the area, naming the site Aztec Springs.

When President Woodrow Wilson declared Yucca House a National Monument in 1919, he protected the site from exploitation by treasure hunters and others, who had pillaged much of nearby Mesa Verde. Today, through the protection of the National Park Service, Yucca House remains intact.

We certainly enjoyed strolling through the site and imagining the site as it would have looked in its prime in the 1200s. Having the site to ourselves, we felt like real explorers and adventurers. We almost hesitate to write about Yucca House, because sharing the site with the world is risky. If it becomes too popular a destination, those visiting in hordes would destroy the charm of a hidden hot spot. Yet, since we enjoyed our exploration so much, we hope that others can visit in small numbers, experiencing the hidden hot spot we chanced upon.

We explored nearby Mesa Verde National Park too. Read about Our Guide to Mesa Top Loop Cliff Dwellings and How We Survived the Balcony House Tour.

Colorado isn’t the only state with unique National Park Site. See our guide to some Amazing National Parks in South Dakota 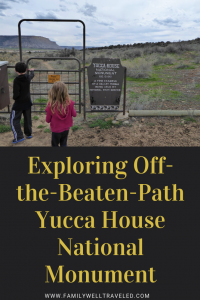 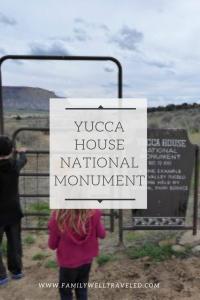