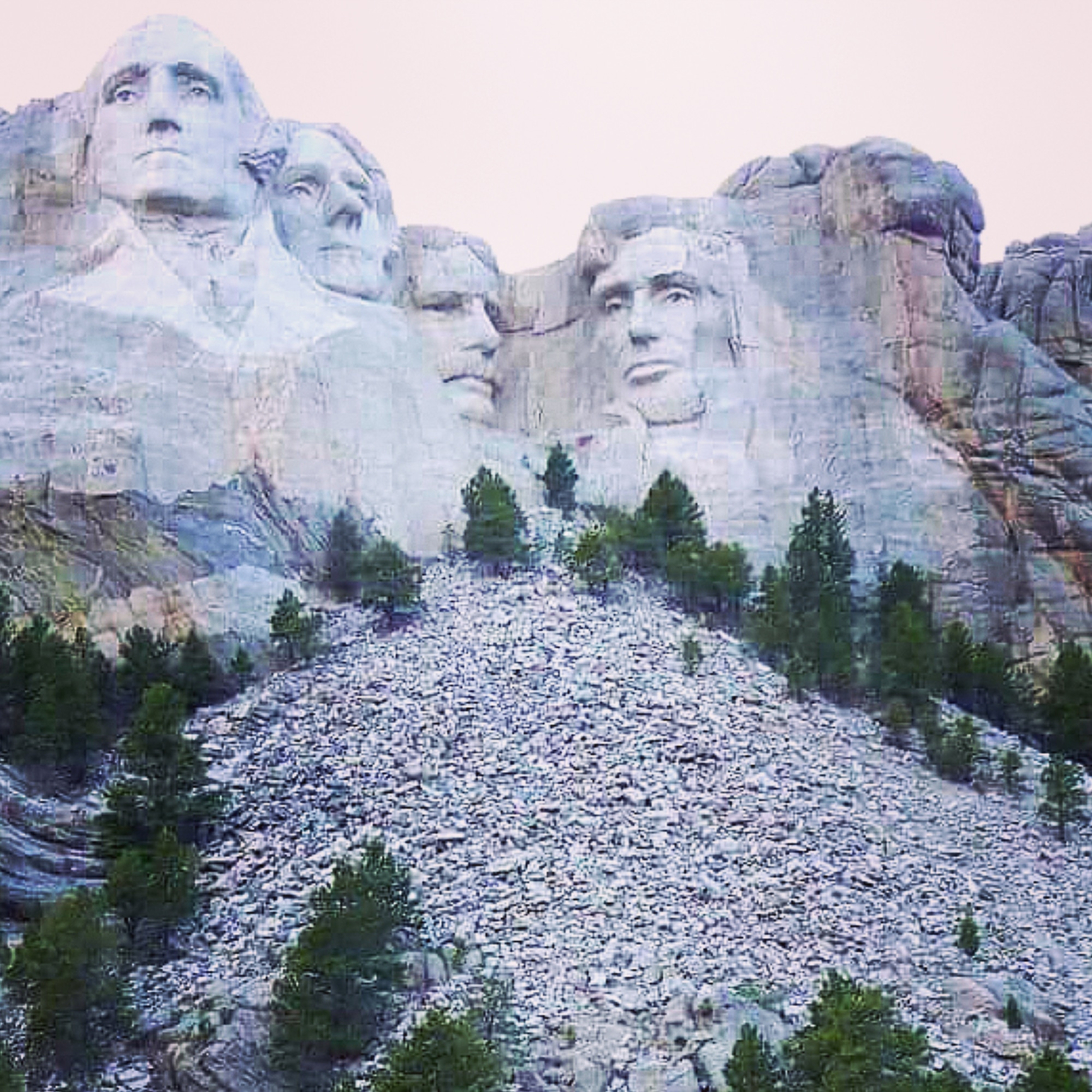 Each year, thousands of people flock to the Black Hills and Badlands of South Dakota. Some go to see the majestic sculptures of Crazy Horse or Mount Rushmore. Others travel to see the fantastic wildlife roaming freely through the fields. Still others ride their motorcycles for the annual convention in Sturgis or relive the Wild West in Deadwood. With great anticipation, our family drove to South Dakota to see the amazing vistas and visit the diverse U.S. National Parks of South Dakota.

We traveled to the Black Hills during July, probably the busiest tourist time for the region. And while parks were teeming with visitors, we did not feel like the region was a tourist trap. There were still plenty of open roads and peaceful landscapes that you are unable to find in other locations that have so many tourist destinations. We left South Dakota wanting more — more of the rolling and verdant Black Hills, more of the fascination wildlife meandering through the fields (and sometimes the roads), more of the colorful tapestry of the Badlands. There is so much to see and do. We didn’t have enough time. Here are some of the highlights and not to miss attractions.

The iconic sculpture carved into the mountainside had been on our bucket list for a long time. The kids had a great interest in visiting too. We have written more about our time here. We loved the anticipation of driving toward the memorial and that crowning moment when you round a switchback curve and spot the 60-foot tall faces carved in white stone. It is unforgettable. So to is the lighting ceremony, which takes place each evening. The ceremony is clearly patriotic in tone, but as American citizens, it stirred us in unexpected ways.

After spending an evening at Mount Rushmore, we spent the next day close to our hotel in Hot Springs, South Dakota. A short 10-minute drive took us to Wind Cave National Park, one of the oldest NPS parks, and one of the three largest cave systems in the world (nearby Jewel Cave National Monument and Mammoth Caves in Kentucky are the other two). The cave is a labyrinth of interconnecting passageways.

Wind Cave offers a number of cave tours. The line to get ticket was long on the day we were there. We took the Garden of Eden tour, one of the shorter and more accessible tours. The one-hour tour was a perfect length for our family. We were introduced to the natural entrance to the cave, and admired the rare boxwork formations in the cave. The Ranger who led our tour was amazing and kept us entertained and informed throughout.

We found so much wildlife at Wind Cave. Yes, we saw coyotes, deer, bison, and prairie dogs while there. At the visitors’ center, we also learned about the black-footed ferret. Once believed to be extinct, the black-footed ferret was found in Wyoming and reintroduced to the park. It is the primary predator of the prairie dog, and park rangers are hopeful they can get the prairie dog population back to equilibrium with the reintroduction of the ferret.

We drove through the 20-mile Wildlife Loop Road, a cannot miss trip in the park. Here we saw more bison than we could count. We also had an up close experience with the wild burros of the park. A passing tour bus operator handed our family some carrots to feed the burros. One very forward burro nosed his way into our passenger-side car window for the vegetable treat and a pat or two on its snout.

We had lunch at the Legion Lake Lodge and enjoyed stunning views of the lake while eating our generous-sized meals. We loved the park so much that we drove back through it another day while returning to our hotel in Hot Springs.

Entrance to the park is $20 for a 7-day pass. It is well worth the expense.

Our kids were born long after the Cold War ended. They had no knowledge of the arms race between the U.S. and Soviet Union from the 1940s through the 1990s. But they were able to learn about that history at one of my favorite NPS locations. Minuteman Missile National Historic Site runs parallel to Badlands National Park on I-90. At three interstate exits, you can see and experience a bit of history.

We were able to visit Delta-09, one of several missile locations that dotted the South Dakota landscape during the Cold War. Here, we were able to see a disabled Minuteman Missile is its silo and speak with a Ranger about the Cold War and missile program. If you plan ahead, you can actually tour the Delta-1 silo and go down into the control room there.

The visitors center showcases the history of the arms race. There are many engaging displays that both entertain and educate. Our children were intrigued by the history of the Cold War and laughed at some of the propaganda the U.S. produced during those years.

Before we visit a National Park, I follow the site’s  Facebook page. And my favorite NPS Facebook feed is Minuteman Missile. They always post informative and entertaining information about the missile program, the arms race, and the history of the Cold War.

While not the most popular of the destination in South Dakota, we highly recommend that you check out and tour Minuteman Missile National Historic Site.

Across the road from Minuteman Missile is one of the entrances to Badlands National Park. The Badlands are peculiarly beautiful and seemingly out-of-place against the flat prairie of the surrounding countryside. The 244,000 acre park is made from geologic deposits of volcanoes hundreds of miles away. One can find prehistoric fossils on hikes and digs in the park. The visitors’ center has a white board listing recent fossil discoveries by park guests. When we visited, several fossils had been found during the past week.

But what drew us to the Badlands were the amazing cliffs and stunning colors formed by the geologic deposits left over time. We drove through the park’s north Badlands Loop Road, which provided more than 20-miles of scenic overlooks and colorful rock structures. One can also find wildlife ranging from prairie dogs and Bighorn Sheep in one of the largest preserved grasslands in the world.

After spending most of the day at Minuteman Missile and the Badlands, we made a brief stop at Wall Drug Store in Wall, South Dakota. The site is a famous road trip stop, housing western memorabilia, boardwalk arcade games, bison burgers, and backyards statues and rides. the 76,000 sq-ft facilities bombards all your senses and is a bargain hunters dream spot. Our kids enjoyed finding souvenirs here. If you are anywhere near Wall Drug Store, make a point to stop in and enjoy the advertised free ice water.

Have you been to the Black Hills and Badlands of South Dakota? Let us know your favorite destination in the region in the comments below. 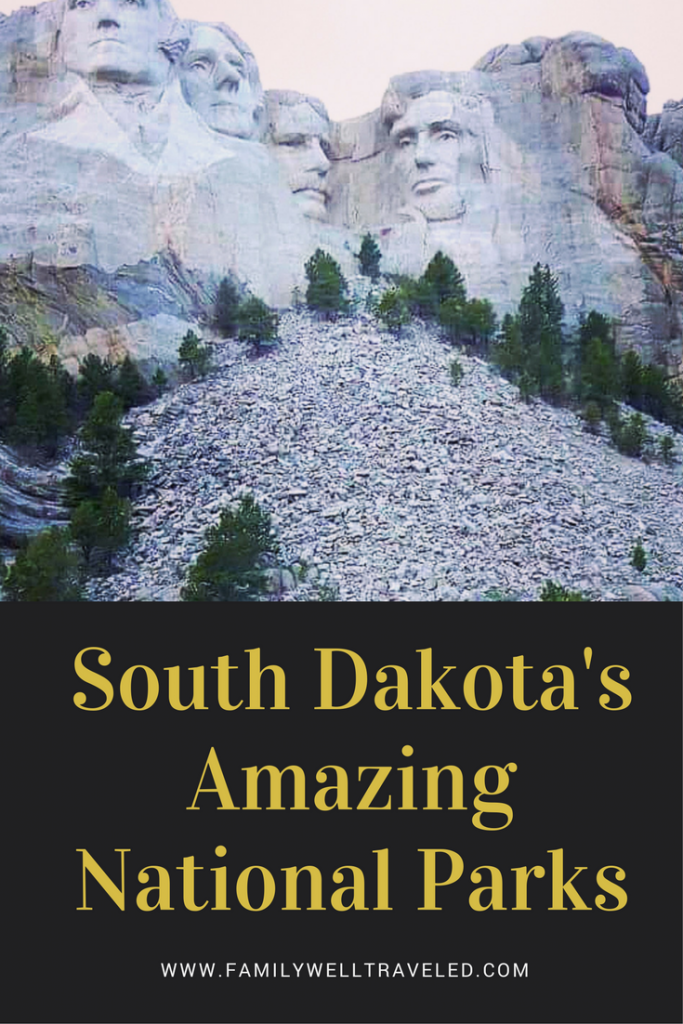 36 thoughts on “Visiting the Amazing National Parks of South Dakota”