Dinosaur Ridge: Walking in the Steps of Dinos in Colorado

Sometimes my kids (and my wife) complain that I am older than a dinosaur. It’s true that I am old enough to remember the Flintstones as more than vitamins or a live-action movie, but I don’t think I’m as old as a dinosaur (although I might sometimes slowly galumph like the giant beasts. To prove my point, I took the family to Dinosaur Ridge in Morrison, Colorado, outside of Denver. Here, we delighted in seeing dinosaur footprints encased in sandstone and marvel at the stegosaurus, brontosaurus, and other prehistoric beasts whose fossil remains were discovered in the foothills of the Rocky Mountains.

In truth, we enjoy learning about dinosaurs and have journeyed throughout the Western U.S. to see ancient fossils and learn about the prehistoric animals. Still, we had a great visit to Dinosaur Ridge, learning and seeing many specimens unseen in our other journeys. We couldn’t resist a trip to the site for a hands-on look at the dinosaur tracks and imprints.

The year was 1877. Teacher Arthur Lakes from nearby Golden, Colorado’s School of Mines, discovered bones never before seen. Lakes’ discovery of a stegosaurus changed the course of paleontology and placed Dinosaur Ridge on the map.

Lakes uncovered the the first stegosaurus bones known to the modern world. Apatosaurus, Diplodocus, and Allosaurus bones also were unearthed. Subsequent finds include the Iguanadon.

Today, Dinosaur Ridge is a National Natural Landmark. You can walk the road path to see the footprints and fossilized dinosaur bones and prehistoric plants.

150 Million years ago, Denver and its surrounding area was covered by a large lake. The Rocky Mountains had not yet formed. Dinosaurs roamed the land, using the lake as a resource. Slate deposits rested on the lake bottom, as did Dakota Sandstone. The dinosaurs roamed the region, leaving footprints and bones in the area.

As the lake dried up, the mountain range formed from volcanic activity. Imprints and fossils remained preserved in the slate and sandstone.

What You Will See at Dinosaur Ridge

Today, visitors find the footprints of three distinct dinosaurs and crocodiles. At the Dinosaur Tracksite, you find 300 plus tracks left by prehistoric animals. Further up Dinosaur Ridge Trail, visitors see  bulges, where the massive Brontosaurus footfalls are forever preserved in layers of rock.

Our Tour at Dinosaur Ridge

There are a number of attractions at Dinosaur Ridge. The most popular attraction is the trail which you can walk.

However, a bus tour provides a 45-minute tour of the trail, with stops at three sites along the trail. A tour leader will walk you through the history of the region, explaining the fossils and footprints found along the trail. Since the trail is inclined, the bus tour is much easier than hiking along the road. And since Dinosaur Ridge is at high elevation (6100 feet), the hike may be difficult for those unused to the elevation.

We opted for the bus tour. With a limit of 12 people per tour, we got a personal tour with our guide. The small size provided ample opportunity to engage with the guide and ask as many questions as we liked (yes, we like to ask questions). The guide also gave insights into the geology and science of the site we would could not learn simply by climbing up the ridge.

Our first stop took us about halfway up the ridge. Here we found a canvas of footprints preserved in the Dakota Sandstone at the site. Millions of years ago, the region was a lake. As the waters receded, ancient animals used the lake as a watering hole. Walking to and from their water source, the dinosaurs left footprints in the sandy surface. Over time, the surface has hardened, but the foot impressions remained.

During this stop, we saw dozens of footprints left by everything from Iguanodon to crocodiles. A charcoal dye helps  visitors to better distinguish the marks.

Our kids loved this stop on the tour. We were impressed with the number of footprints found in the slab of sandstone, and the variety of species too. Of course the kids enjoyed the opportunity to place their hands and feet in the imprints. They were awed by the size of these prehistoric prints.

Bulges in the Rock

Further up the ridge, we made a second stop. Here, layers of rock have formed through the millenia. At one time, an enormous brontosaurus tread in this region. The sag of the footprint is obvious when the guide pointed in out to us. Words cannot really describe the awe we felt as we saw the footprint encased in stone. It made the size and weight of the dinosaurs that much more real for us.

Our third and final stop (which actually was a short walk from the Brontosaurus bulges) revealed numerous dinosaur bones encased in the rock and sandstone slabs. These bones are preserved in the rock, but detail the number of prehistoric species that made their home in Colorado eons ago.

The Trek Through Time Museum

Dinosaur Ridge is a lot more than a trail with prints and bulges. The facility includes a museum featuring information about dinosaurs in the region. The museum is very interactive and designed with the kids in mind. There are many exhibits for the kids to touch and see. If it’s not behind glass, then it’s available to touch and feel.

The museum is small, but has enough room for five impressive murals showing the prehistoric time in Colorado. In addition to the murals, replica track ways allow you to see the footprints of birds, alligators, and dinosaurs that once called Colorado home.

Our kids also enjoyed dressing up like dinosaurs and prehistoric raptors. They also appreciated the Goldilocks Footprint Experiment and playing with the computer in the building. Touching the cast claws of various dinosaurs made the age more real for our kids and us.

Kids can get dirty and sift through the sand searching for dinosaur bones, petrified wood, and ancient sea life in the kids dig areas. There are two dig area on site. One dig site allows kids to uncover replica dinosaur fossils and experience what it would be like on a real dinosaur dig site. The other dig area contains buried wood, mollusks, and other shells that the kids can discover and rebury for the next team of junior archaeologists.

Replica Dinosaurs Throughout the Visitor’s Center

Can’t envision what the dinosaurs looked like based on fossils and footprints alone? If you are int his boat, you’re  in luck. Full-size dinosaur replicas are assembled throughout the site for you to get a better idea of the size of the prehistoric beasts.

We cannot go anywhere without visiting a gift shop. Our kids firmly believe that you don’t know what you’re missing until you check out the gift shop.

The Gift Shop at Dinosaur Ridge includes plenty of small trinkets and higher-end collectibles for you. And unlike some gift shops, a family can get in and out with souvenirs that don’t break the bank. We found plenty of trinkets under $10.

As the name implies, this is a grab and go snack shack, not a full-service sit down restaurant. However, if you have the munchies (and a bag of chips fits the bill), check out the shack.

A few miles from the Dinosaur Ridge site you find Triceratops Trail in Golden. The trail is administered by the friends of Dinosaur Ridge. Like Dinosaur Ridge, you will see the footprint impressions of triceratops, Edmontosaurus, and T-Rex in the sandstone along the 1.5 mile trail.

Triceratops Trail is an easy city hiking trail. There is little elevation gain. Parking is located at the Colorado School of Mines, adjacent to the trail.

There was enough to see and do at Dinosaur Ridge to hold the attention of our kids and us for a couple of hours. We recommend taking the guided tour of the trail in order to get more thorough information and stories about the tracks you see and to learn more about the history of the archaeological importance of Dinosaur Ridge and Colorado. We also recommend a quick trip to the Trek Through Time Museum (which is included in your tour ticket price).

We enjoyed a chance to go on a Family Archaeological Dig in Golden, Colorado. 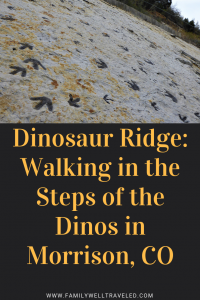 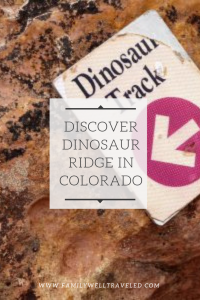