Listen to the Voices of the Past at Manitou Cliff Dwellings 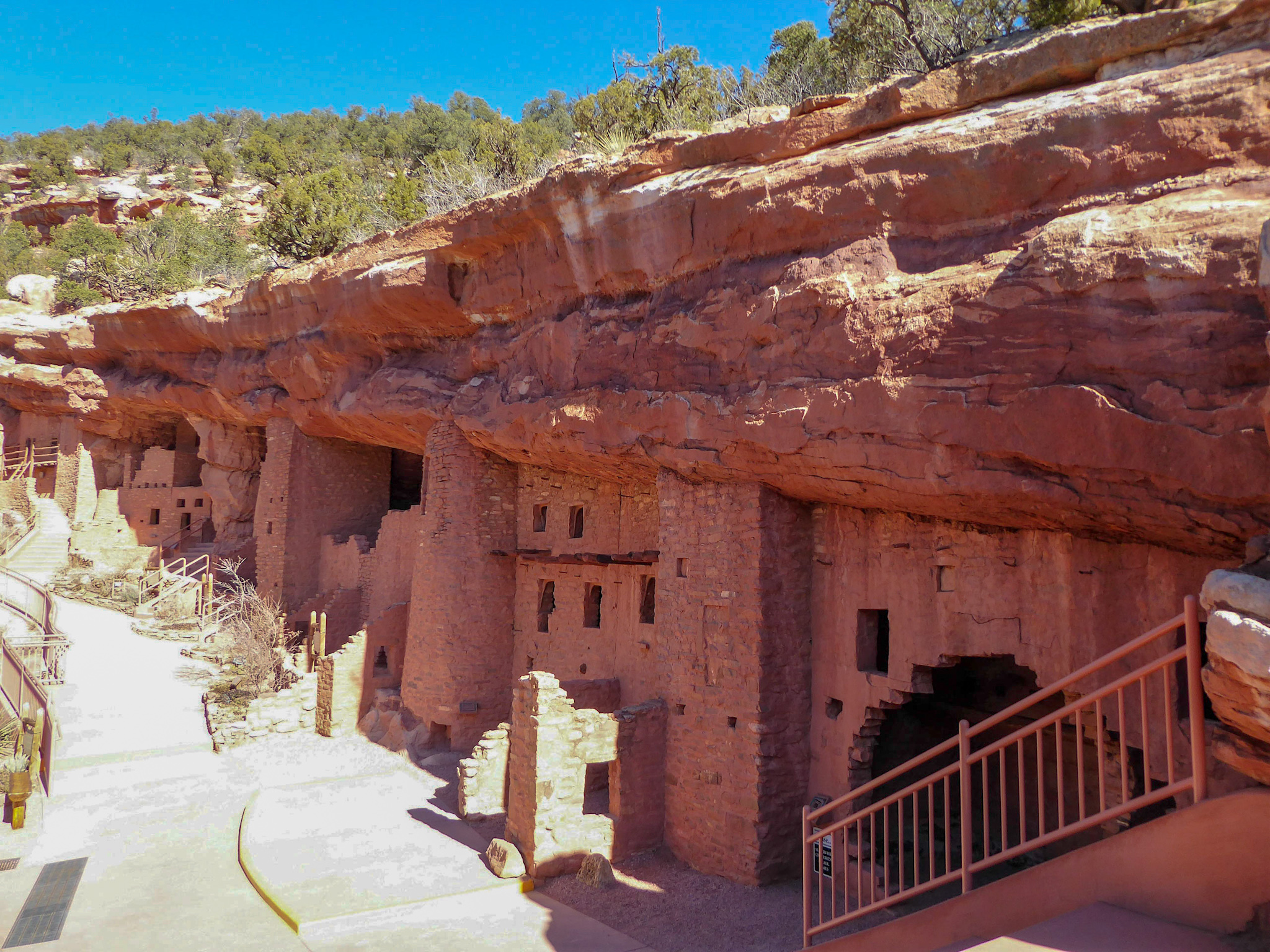 Our family enjoys visiting the ancient cliff dwellings of the the desert Southwest. We visited Mesa Verde National Park in Colorado. And, we’ve toured Bandelier National Monument in New Mexico. I can see us visiting all of the cliff dwellings and residences of the Ancestral Pueblo throughout the Southwest. That’s why we seized the opportunity to visit the Manitou Cliff Dwellings just outside of Colorado Springs.

A History of the Cliff Dwellings

The three story structure is among the largest, most complete structures you can visit today. We appreciated the opportunity to walk through the rooms unimpeded. They are open and airy. Our visits to Mesa Verde, though wonderful, have limited exposure to such large structures. While you can tour Cliff Palace, for example, you cannot walk through the back room structures. At Manitou, you walk freely through the structure. Also, you can touch the remains. This is discouraged at Mesa Verde National Park.

After paying admission at the gate, we drove uphill to Manitou Cliff Dwellings. The parking lot is at the base of the structure. You take a self-guided tour of the 1000-year-old ruins. Placards throughout the dwellings describe the rooms and their use among the Ancestral Pueblo. The map we received at the gate also tells about the structures. Finally, a QR code on the map allows you access to guided tour from your smart phone.

What always amazes us as we tour cliff dwellings is how warm they feel. We toured on a cold, windy winter day. But, as we entered the cliff dwellings, we found respite from the elements. It isn’t difficult to imagine the Ancestral Pueblo living comfortably while the elements of rain, snow, wind, and scorching sun made life outside the dwellings difficult.

We noted a number of petroglyphs throughout the ruins. For us, it was like a scavenger hunt.

Also, on the tower building, we found pottery shards mixed in with the normal bricks and mortar normally used throughout the structures. Once again, this made our tour more special. We were on high alert for other special finds throughout the cliff dwellings.

Of course, one of the central points of interest is the kiva. The kiva was the religious center of the Ancient Ones. Found in most homes, it was akin to a in-home temple. The circular room contains an opening at the bottom of the kiva called the sipapu. Spirits from the other world entered through the sipapu, according to Ancestral Pueblo belief.

The kids enjoyed discovering a room believed to be a turkey pen, due to all of the turkey feathers found in the room. Even the foul needed a warm place to stay during the bitter winter months.

While the highlight of the site is the cliff dwellings, Manitou Cliff Dwellings also shows the life and culture of the modern Pueblo, descendants of the Ancients. The Pueblo, which houses the museum, gift shop, and restrooms, exemplifies the modern Pueblo culture. The structure is similar to those one finds around Taos, New Mexico. The Pueblo at Manitou, built in 1904, housed a Native American family until 1984.

For the most part, the cliff dwellings are empty rooms. There are few artifacts within the structures. To get a better understanding of the life of the Ancestral Pueblo, we spent some time in the museum, located inside the pueblo. Here, we saw pottery, baskets, tools, and toys uncovered and used by the Ancients.

The black on white pottery of the Ancestral Pueblo is world renowned and easily recognizable. It is unlike anything that other cultures produced. The museum showcases a good amount of the pottery.

In the parking lot, we found the tepee, a staple of the plains Native Americans. It was fun to climb in and spend a few moments in there, taking pictures. I really liked how the tepee outer artwork and markings could be seen from inside the structure, which was supported by beams and rope.

We spent a couple of hours at Manitou Cliff Dwellings. That gave us ample time to explore the dwellings, check out the museum, and roam through the gift shop.

The cliff dwellings are not as massive or spectacular as those at Mesa Verde National Park. However, what they lack in scope, they make up for in accessibility. While you are able to tour the many of the structures at Mesa Verde, you can enter few of the dwellings. Also, there’s no touching at Mesa Verde.

While Manitou Cliff Dwellings does have posted rules about staying on paths and prohibits climbing, we had more access to the dwellings than at Mesa Verde. Also, since the tour is self-guided, we could spend as much (or as little) time as we wanted. Touching the ruins made the experience more entertaining for our kids.

The museum had an impressive array of artifacts and I enjoyed looking through these (although my kids had less interest).

A final word about the terminology used at Manitou Cliff Dwellings. Throughout the museum and exhibit we found the word Anasazi used to identify the Ancestral Pueblo peoples. However, we learned that this is not the term that they used for themselves, and has a pejorative connotation (it’s a Native American word roughly translated as “enemy.”) Throughout this post, we chose to use the terms Ancestral Pueblo or Ancient Ones instead to refer to the people of the desert southwest.

Have you  been to Manitou Cliff Dwellings? What were your impressions? Any other Ancestral Pueblo sites we must visit? Leave a comment and let us know.

Take a journey to Cozumel, Mexico to Tour the Mayan Ruins of San Gervasio.

Read about our adventure when We Survived the Balcony House Tour at Mesa Verde National Park.

Check out Bandelier National Monument and other Things to Do Around Santa Fe, New Mexico. 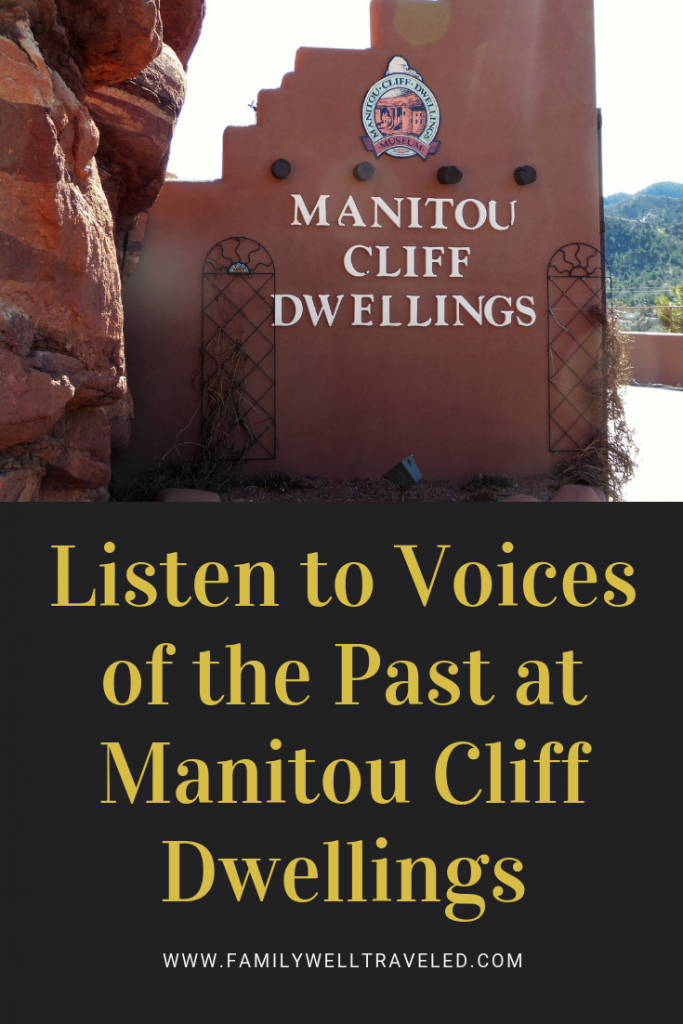