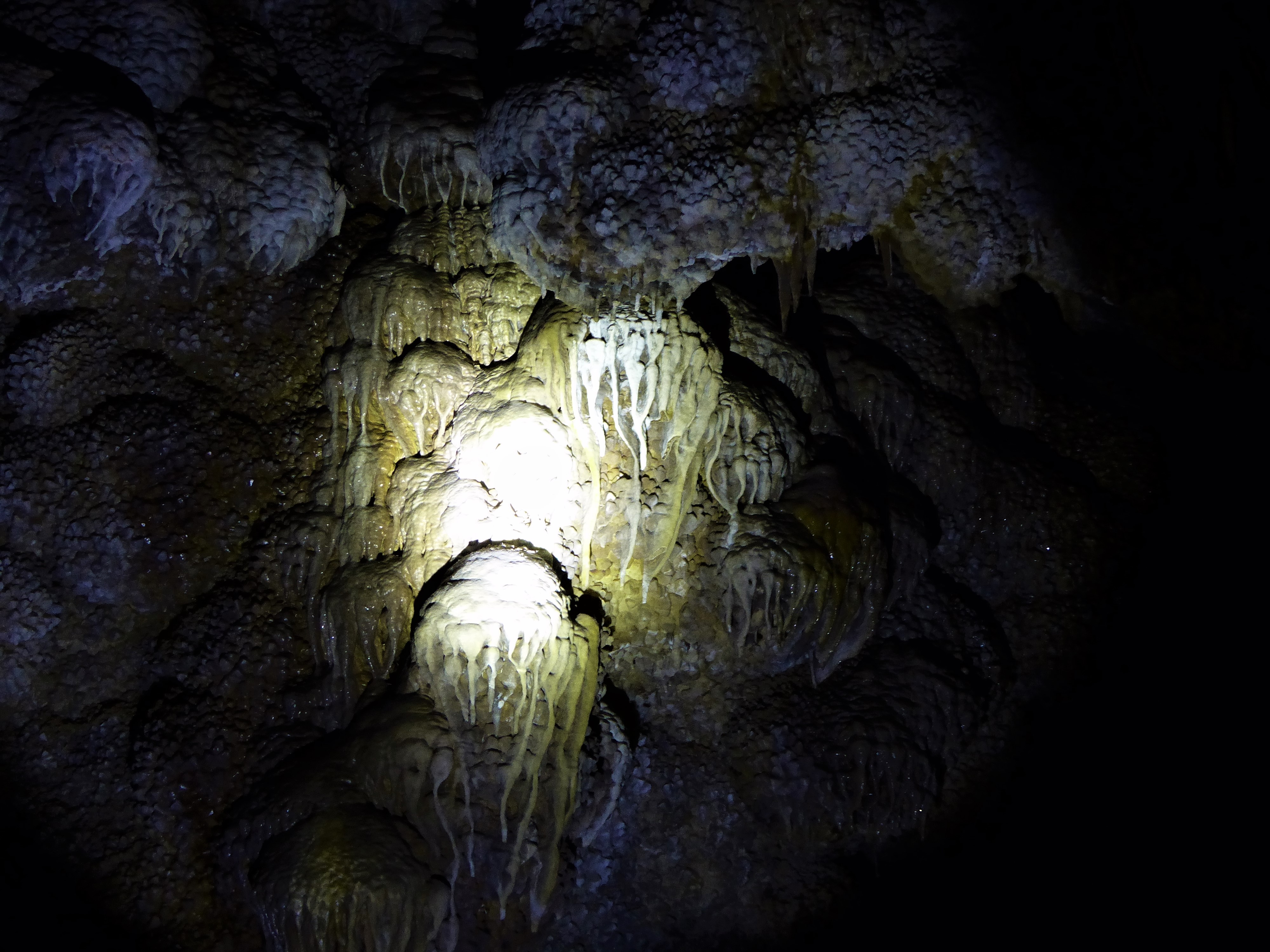 Two of the world’s largest cave systems are tucked away in the Black Hills of South Dakota. Jewel Cave National Monument winds through 202 miles of mapped cave shafts, making it the third largest cave in the world. The cave, located a few miles west of Custer, South Dakota is often overlooked with nearby Wind Cave National Park drawing more visitors. However, Jewel Cave is a can’t miss destination during any visit to the Black Hills.

But, our family did miss it during our first trip to South Dakota. We visited four of the five national park sites in the state, but did not have time to visit Jewel Cave National Monument. Our daughter was heartbroken, and asked for a return trip just to see Jewel Cave. We did so. And we left the scenic cave tour and the monument wondering how we passed up visiting the site during our first trip.

We won’t make that mistake again. And we’re sounding the trumpet, encouraging others to make a visit to Jewel Cave. So, here is our guide to Jewel Cave National Monument.

History of the Cave

There is no evidence that the Native American people who lived in the Black Hills knew of the cave. In fact, there is only one small natural entrance. Scientists do not think bats lived in the cave until after the discovery of Jewel Cave by brothers Frank and Albert Michaud. The Michaud Brothers filed a mining claim on the site in 1900. The brothers discovered a small entrance with air coming out (Jewel Cave is a breathing cave, meaning that changes in barometric pressure will force winds into or out of the cave, causing it to breathe.

The brothers put dynamite down the hole, enlarging the entrance. Inside they found calcite crystals. Believing the abundant calcite to be a gem vein, the brothers named the site Jewel Cave. To their chagrin, they discovered the calcite had no estimable value, and no precious gems are found within the cave. 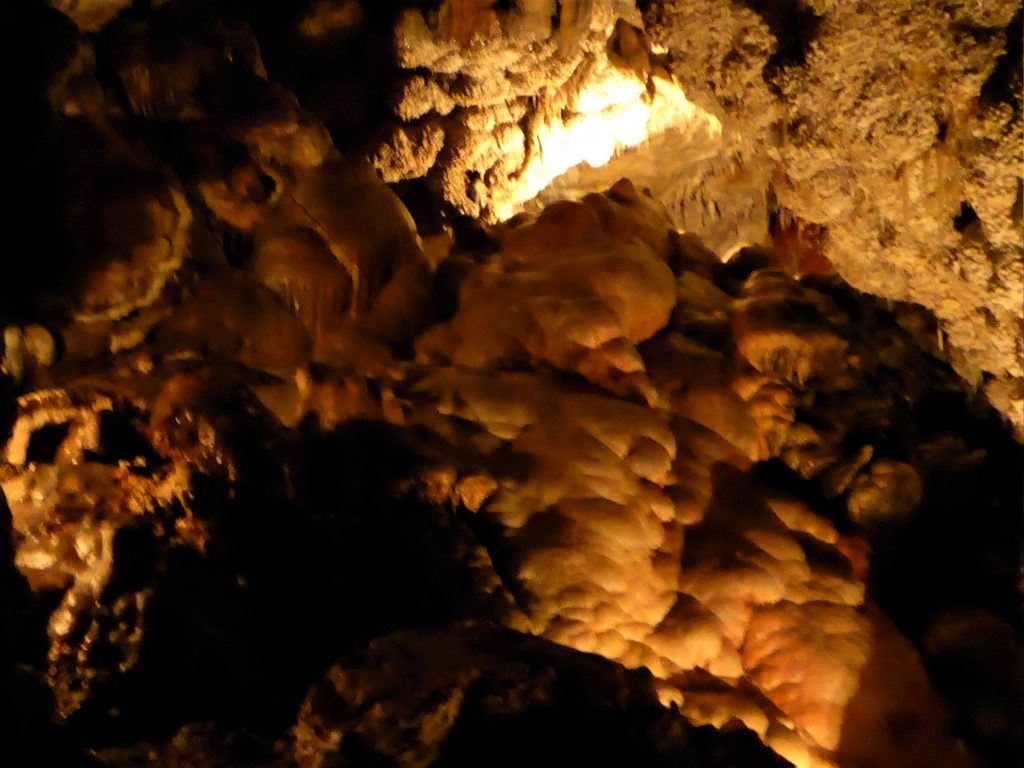 The brothers tried to make the mine/cave profitable anyway. They promoted Jewel Cave as a tourist destination. Wind Cave, to the southeast, was a popular tourist spot and was designated a national park in 1906. The Michaud brothers hoped to draw tourists to their cave, too. However, the small town of Custer did not draw the same admiration as Hot Springs (near Wind Cave). There was no train to the location, and the trip was half a days journey from Custer.

So the Michaud Brothers’ dream of profit from tourism also failed. At this point, people started a preservation movement to save Jewel Cave, and it was designated a national monument by President Theodore Roosevelt in 1908.

Unlike others caves, Jewel Cave was not formed by underground waterways. Instead, the region was covered by a sea more than 350 million years ago. As the sea receded, limestone deposits formed from the sea life. In fact, today you can see fossils of sea creatures in the cave, more than 1000 miles from the ocean. When the Black Hills thrust up from the earth 60 million years ago, the cave began to form.

The size of the cave has not changed. But, efforts to map the cave have led to discovery of miles upon miles of cave trails. In 1959, only two miles of cave were documented. Today, more than 202 miles of cave are mapped, with approximately 3 miles of new cave chartered annually. Scientists use sonar technology. With this technology they know there are many more miles of cave. And only about 55% of the cave lies within the borders of the national monument.

Jewel Cave continues to surprise those exploring it. For example, as recently as 2014, no one thought the cave had a lake. Several lakes have been located since 2015.

Mapping of the cave continues yearly. It’s not a job for the feint of heart. it takes 12 hours to get to the extreme edges of the known cave parameters. Brave souls can take a three day tour inside the cave, but they can only carry in a small backpack with essentials and must carry out everything when leaving the cave.

We took the most popular scenic cave tour during our visit. The tour last about 80 minutes. Tickets for the tour may be purchased before your arrival. We highly recommend pre-ordering your tickets to get the best times for you. You may have to wait an extended period of time if you do not pre-order tickets.

Even if you pre-order your ticket, you will have to check in at the will-call and ticket sales kiosk to get your official tour tickets.

The scenic tour is considered a moderately strenuous tour. You will walk about 1/2 mile and climb up and down 723 stair steps. And with all caves, you must watch your head while walking. We were warned at the start of the tour to watch for low-hanging cave ceilings. Our Ranger guide said if you forgot to duck once, you would never forget again! 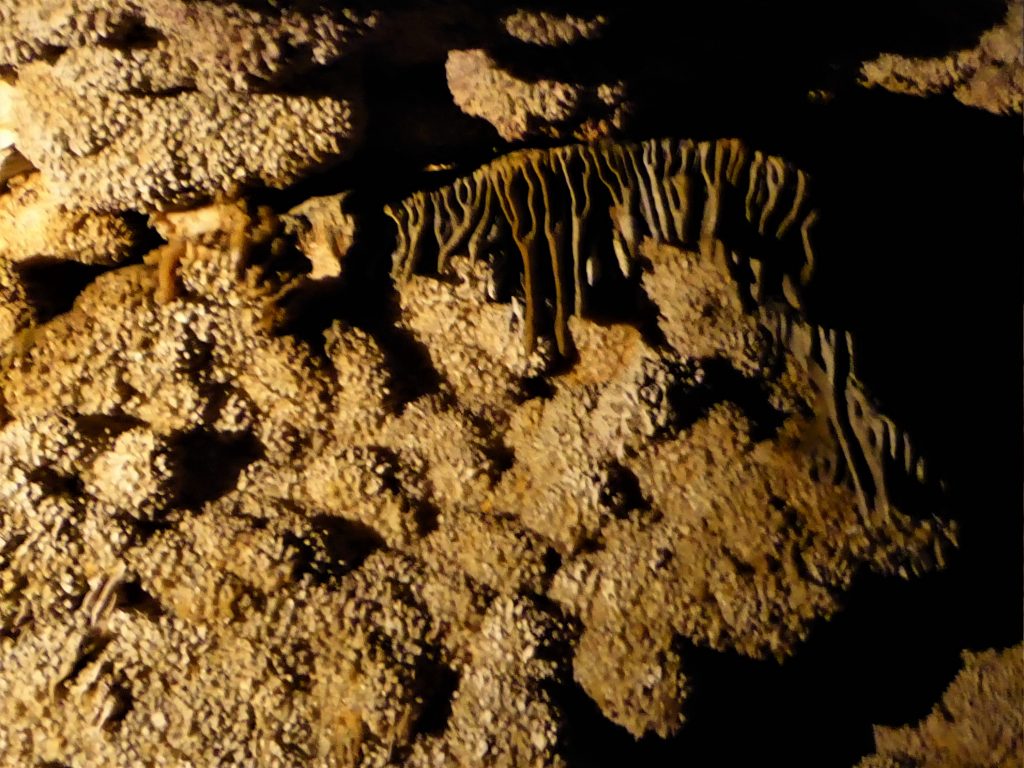 The tour starts as you descend 200 feet in an elevator in 30 seconds, making it the deepest elevator ride in South Dakota. Interestingly, at the end of the tour you will ascend 300 feet in the same elevator.

Ranger guides explain the history and geology of the cave during the 80-minute tour. You see what seems to be a large area of the cave (although in reality you see only a small percentage of the cave passages). However, the room, chambers and paths you do see present a myriad of different cave scenes. You go through large chambers and cavities as well as narrow pathways. 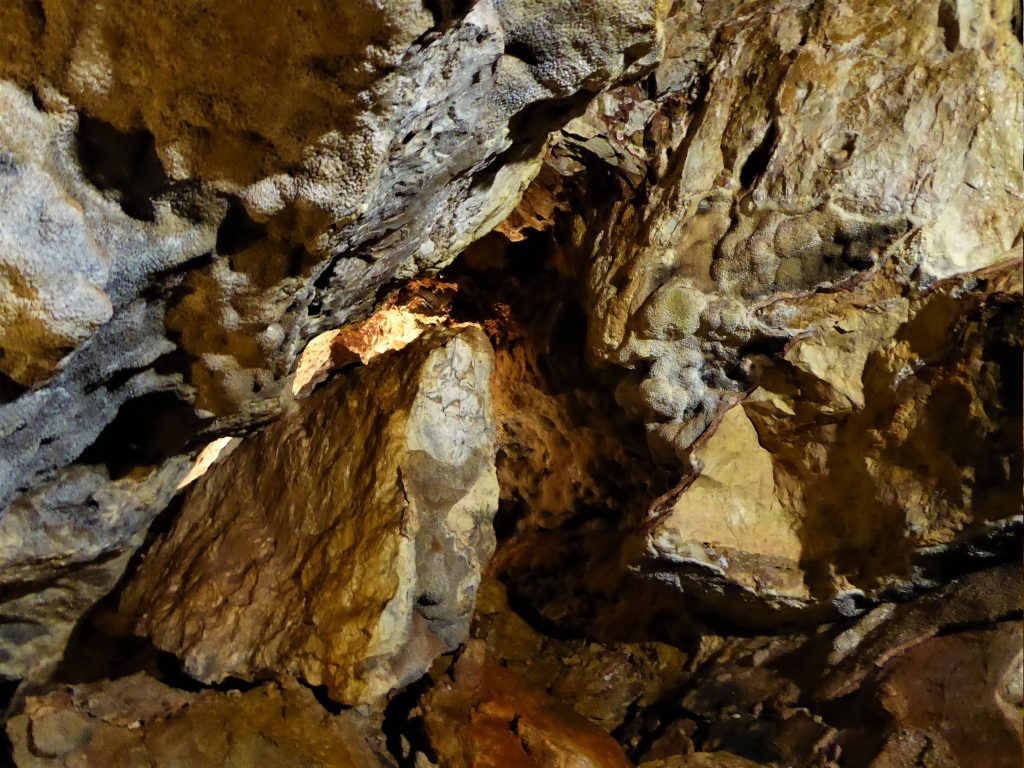 On the tour, you see stalactites and stalagmites, cave bacon, calcite crystals, nailhead spar, soda straws, and breakdown (area where the calcite layers grew too heavy and fell to the cave floor).

A Word About White Nose Syndrome 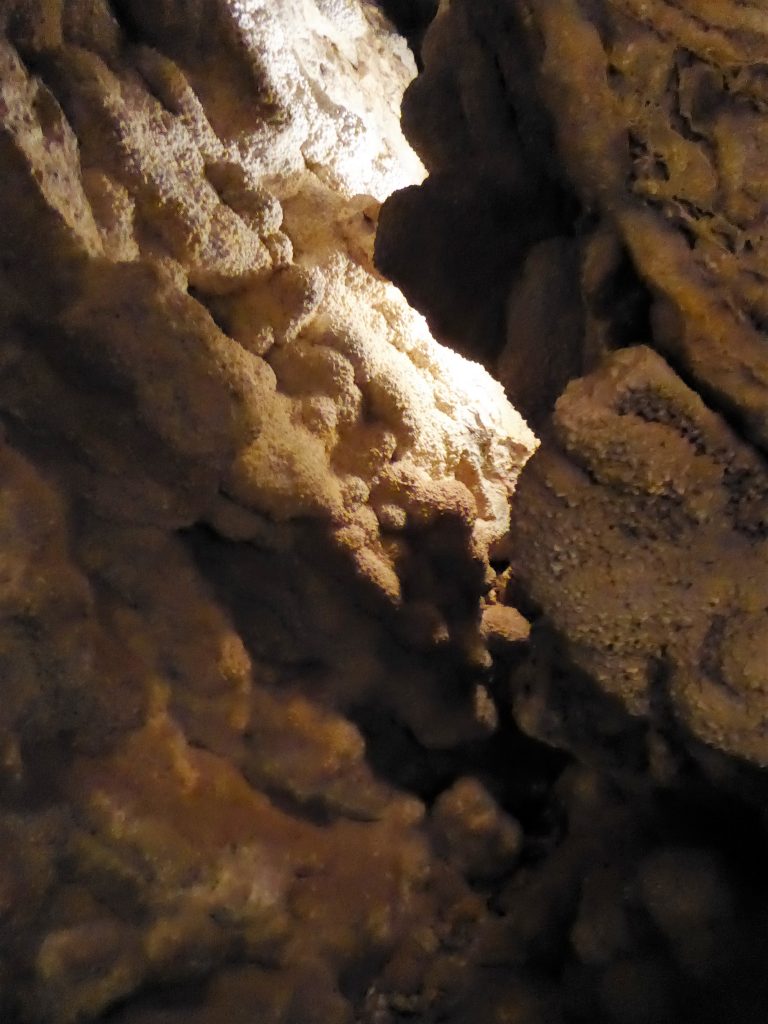 White Nose Syndrome is a disease affecting bats, and it is present at Jewel Cave. The disease does not spread to humans, so there is no need for alarm. However, Jewel Cave and other caves in the region work to contain the disease and prevent the spread to other caves.

White Nose Syndrome causes bats to rouse early from winter hibernation, thus using up their fat resources. More than 5 million bats have died in the U.S. since the disease first spread in 2006.

What does this mean when visiting caves in South Dakota?

First, if you are visiting other caves (such as Wind Cave which is unaffected by the disease), it’s recommended to visit those caves without the disease first.

Second, if visiting multiple caves, you should wear different clothing and shoes to the caves, to prevent the spread of the disease.

Third, upon exiting any cave, you will go through a decontamination station. Basically, you’ll walk through a small tray with a mixture of water, rubbing alcohol, and hydrogen peroxide which should neutralize any disease.

Expect to go through the decontamination station after any tour, even though the bats generally do not live in the portions of the cave you’ll tour

Is There More Than Spelunking at Jewel Cave?

Although the primary draw of the monument is the cave, there are other things to see and do at Jewel Cave.

For example, you can walk on top of the cave on the roof trail, a quarter mile trek where you can imagine the cave underneath. You may also spot a deer, elk, or mountain sheep on the trail. There are other longer and more strenuous trails at Jewel Cave for the more adventurous. 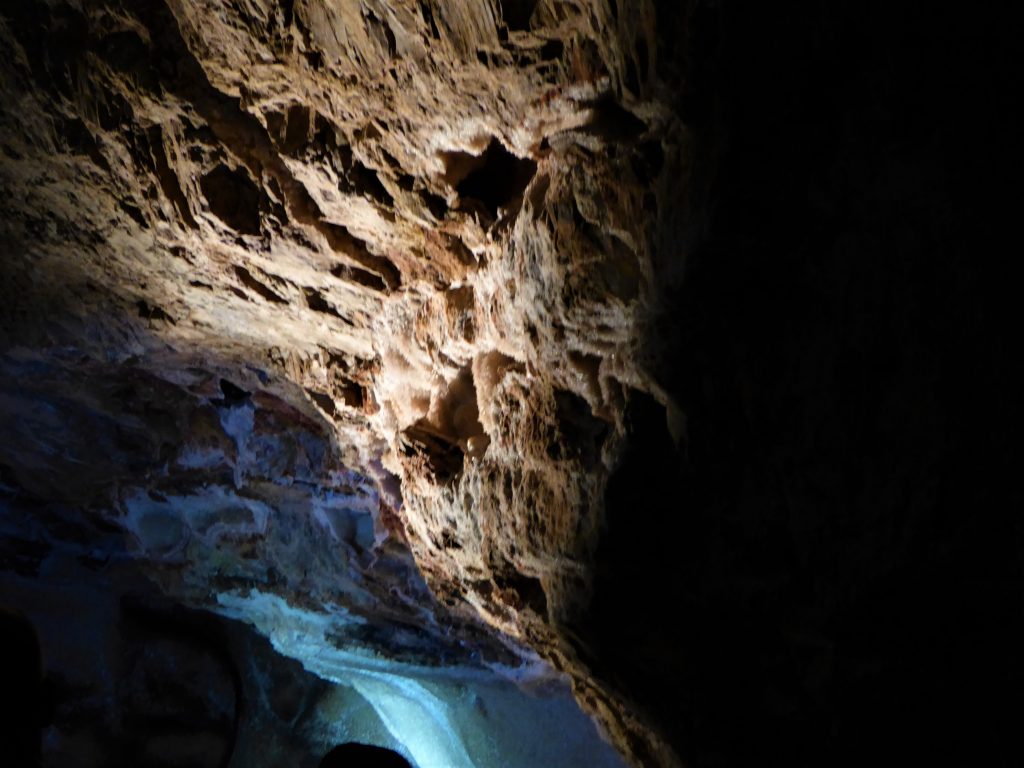 Preserving the natural habit of Jewel Cave is of paramount importance to the park staff. Great care is taken during tours to explain why you cannot touch or rest against the cave walls (one reason being that mineral sediment in the cave will forever stain your clothing). Touching the walls leaves oils that may alter the cave.

Additionally, you are not allowed to bring food or beverage into the cave. This includes gum. You may not chew gum on the tour. Once again, rangers attempt to preserve the integrity of the structure.

During our tour, we were told with some chagrin how the Michaud Brothers blasted dynamite down the cave’s one natural entrance. Without that blast, we would not know about Jewel Cave today, but there still seems to be some regret by rangers that the brothers changed the natural environment. Effort also is made to ensure that animals stay out of the cave, since they do not naturally inhabit the cave.

Jewel Cave also has solar compactors for recycling within the park.

Explore the natural wonders of Black Canyon of the Gunnison National Park in Colorado.

If science is you passion, you must visit the Denver Museum of Nature and Science. 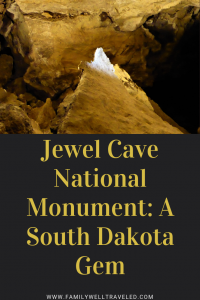 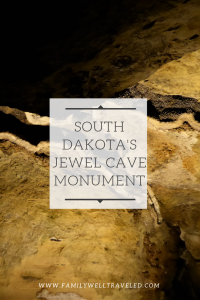