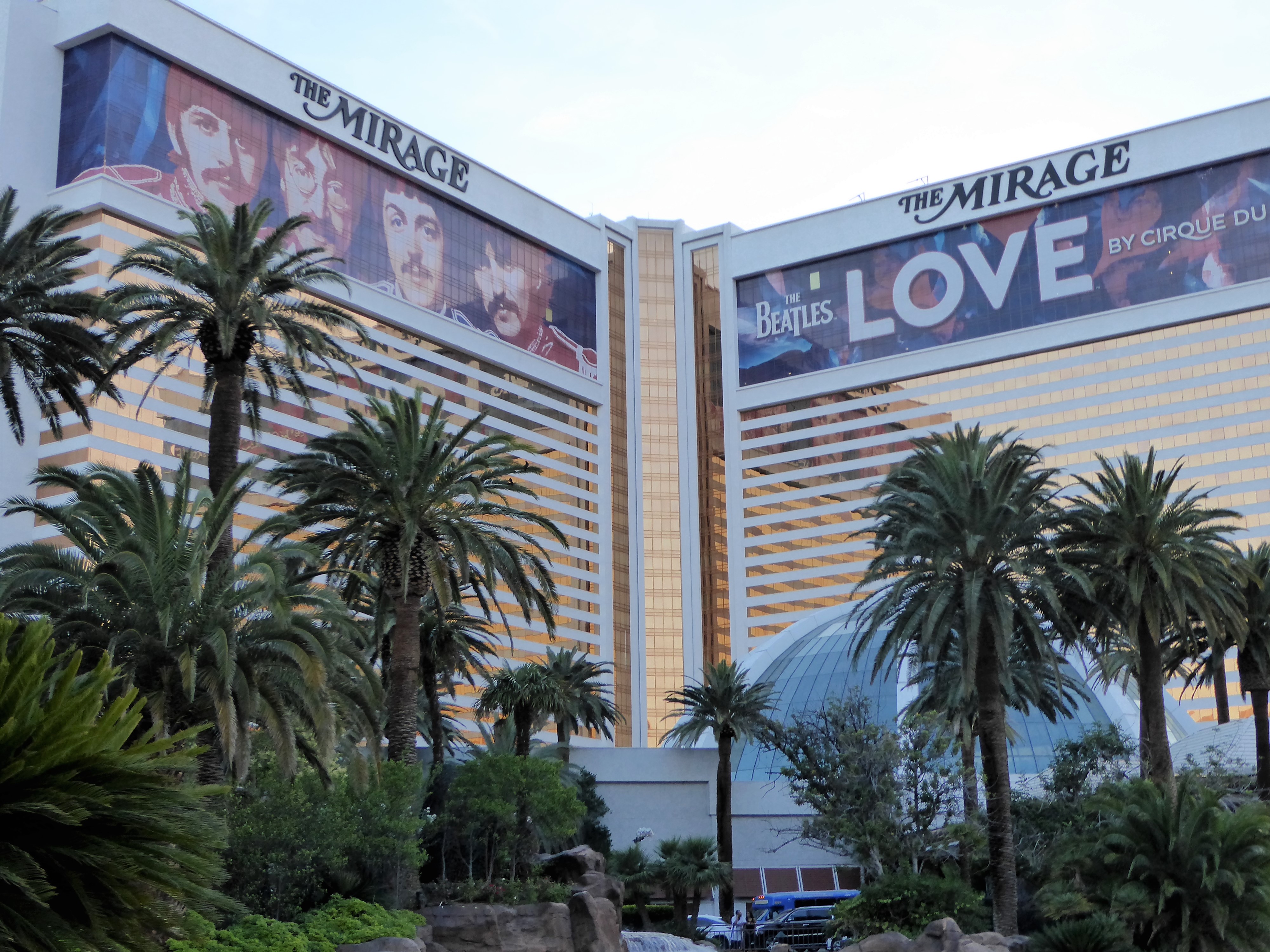 Las Vegas is one of the premier travel destinations in the United States. But, everyone knows that it is an adult playground. “What Happens in Vegas Stays in Vegas” is the town’s tourism slogan. However, we wanted to see if a family can have fun in Vegas and live to tell about it. Vegas has a surprising number of family-friendly events. We spent three full days in Vegas. The kids were never bored. Here is our guide to a family friendly Las Vegas vacation.

Our family friendly Las Vegas retreat kicked off in style. We arranged a limo pickup at the airport. The kids had no clue. They were floored. Even more fun, we arranged for the kids’ names on the limo sign at baggage claim.

We rode in a stretch limo from Presidential Limousine from the airport to our resort on the north side of the strip. The limo stocked sparkling apple cider, champagne goblets, and bottled water for us. It was a fun introduction to Las Vegas for the kids. They oohed and aahed as we drove past the Bellagio, the Paris, Treasure Island and all the other resorts.

It was a splurge for us, but great fun.

A Wonderland for Kids

While planning the trip, we wanted our 9-year-old aware of the most family friendly Las Vegas resort — Circus Circus. We knew we’d spend a good deal of time at the resort on the North end of the strip. Conveniently, our rooms were within walking distance to the Circus Circus.

We spent the better portion of a day at Circus Circus. Here, we reveled in the Big Top circus acts, including clowns, trapeze artists, and acrobats.

The kids enjoyed playing games at the Midway for a chance to win stuffed animal prizes. Our daughter set her eyes on a large stuffed animal giraffes. Fortuitously, she won that giraffe early on when she successfully threw a ping pong ball into a floating glass bowl. Score one for her. Then it was game on as our son attempted to win large prizes too. Although unsuccessful, he walked away with a number of new stuffed animals for his efforts.

But the big draw at Circus Circus is the Adventuredome. The dome houses over 30 amusement park rides, including the only indoor double looping roller coaster. The Adventuredome has simple, calm rides — including a carousel, to extreme rides I was afraid to ride. The kids, however, rode every ride, unafraid of speed, inverted position, and unmitigated peril. They’re a brave duo.

Watch the Bellagio Fountains and the Mirage Volcano Erupt

The Circus Circus wasn’t the only resort we visited on the Strip. We wanted to see the Bellagio Fountains Show at night.

We made our way to the Bellagio and found a decent spot near the Bellagio reservoir. Fountain shows begin at 3 p.m. After dark, they run every 15 minutes. So our wait for a show was minimal. There was a large crowd which we expected. And while our son thought the fountains would be boring, he left the spectacle marveling at the display.

My wife and I have visited Vegas a few times, but never seen the Mirage volcano erupt. We knew the kids would enjoy it. The volcano show takes place at 8 p.m., 9 p.m., and 10 p.m.

We caught the earliest show. It was thoroughly entertaining. We all enjoyed the powerful display and were close enough to feel the heat from the fire.

Indulging in a New Dessert

We don’t know why, but our daughter’s heart swooned while passing a macaroon shop in the Venetian Resort. Turns out, she really wanted to sample a macaroon. She’s a picky eater, but we allowed her to indulge that sweet tooth at Le Macaron. It was a over-indulgent girly moment for her. She so enjoyed her macaroon that we returned the next day for her and her brother to each sample another flavor.

We knew the kids wanted to visit M& M World. We had told them that the store is four floors of M&M consumer heaven. Here you can customize your M’s (you can even have your picture printed on them) or choose from the wall of 125 varieties of M&Ms (You can get a sample of one variety, too). We saw a replica of Kyle Busch’s M&M NASCAR race car. And we saw the 3D film “I Lost My ‘M’ in Vegas” starring Red and Yellow in a 10-minute fun feature film.

Right next door is the Coca-Cola Store. We found two floors of Coke merchandise, and a soda fountain where you can sample a number of Coke flavors. The Coca Cola Polar Bear was there too, and you can get your pictures with the big guy.

Of course, the kids had to buy stuff at each store. The difficult decision became, what to buy?

Enjoy After Dark Swimming at the Resort Pool

Vegas gets hot, especially when we visited in June. Daytime highs approached the 100 degree mark. What better way to beat the heat than with a evening swim at your resort pool?

If you stay at any resort on the strip, you should have a pool. Our resort had a good sized pool and hot tubs. The pools were conveniently located near tall palm trees, offering some daytime shade. But. we preferred swimming after dark when the temps cooled off. Yes, we swam every day we were in Vegas.

During our stay in Vegas, the NHL’s Las Vegas Golden Knights team had finished their season. However, we’re hockey fans and our son wanted to see the T-Mobile Arena and check out the gift shop.

Instead, we hooked up with a friend who lives in the city. He drove us to the Knights’ practice arena on the west side of the city. Our friend feels the practice facility has a better gift shop. It certainly seems so. The Arsenal stocks everything from key chains and jerseys to game pucks.

We enjoyed seeing the practice rink. While there, some students were practicing. We didn’t see any Knights players (not a surprise in the off season). The facility has been upgraded greatly due to the success of Vegas’ first professional sports team.

On a side note, we drove by the under-construction stadium that will the home of the NFL’s Raiders when they move to Las Vegas in a couple of seasons.

The Eiffel Tower at the Paris Resort is a to scale replica of the original landmark. It is about half the size of the original. The Vegas version is so near the airport that it had to be constructed at a smaller size for air travel safety.

Since it opened it 1999, the observation deck at the Vegas Eiffel Tower has been a must-see. You get sweeping views of the entire valley and city. Since it is next to the Bellagio, many people go to the observation tower in order to watch the fountain shows at night.

We went during the day, so our wait time was negligible. Honestly, after going up during the evening, the daytime viewing is not as impressive as night time. The kids, however, still enjoyed this elevated view of the strip.

We knew we wanted to see a family-friendly show while in town. We visited a Tickets on Demand kiosk on the Strip and with our daughter’s persuasive powers, bought tickets for the Terry Fator show at the Mirage.

Ventriloquist Fator is the season two winner of America’s Got Talent. He is celebrating his 10th anniversary performing on the Strip.

The show was vastly entertaining all our family. We were awed by Fator’s craftsmanship and talent. He freely gets material from current events. The show includes a Puppet Trump who Tweets throughout the show, along with jokes about Willie Nelson’s tax troubles and the Me Too Movement. The show was just racy enough to entertain adults with most of that humor going over our kids’ heads.

Fator encouraged the audience to record their favorite parts of his show and share on social media. So we did. Enjoy this video of Terry Fator as Stevie Wonder and Paul McCartney singing “Ebony and Ivory.”

A Garden to Inspire Even the Worst Green Thumb

We do like to get our hands dirty in the garden. But, we’ve got nothing on those gardeners at the Bellagio Conservatory and Botanical Garden.

The conservatory changes seasonally. When we visited, the theme celebrated a Japanese Spring replete with cherry blossoms. You cannot help but stand in awe and admire all the artistry involved.

Getting a Picture with the Living Statues at The Venetian

Street performers come indoors at the Venetian Resort. Throughout the resort’s Canal Shops, you find performers sing, dance, and act up a storm. However, it was the more sedate performers who drew our attention.

In the resort, we found a living statue. We called her the Marble Lady. Place a dollar in her donation box and she’ll come alive temporarily, allowing you a picture with her. My daughter bravely placed a dollar in the donation box. She did hesitate when the living statue called her up to the pedestal and coaxed a smile out of her by stroking her cheeks.

I wasn’t so reserved. I happily took a picture with my Marble Lady. Then it became a family joke. The kids jested that I wanted to marry the Marble Lady. I joked that it was clear she liked me by looking at her smile. My son was disappointed when we returned the next day to see that our Marble Lady was replaced by a bloke. So sad, my hopes of a great love affair with a statue were dashed.

Save Your Feet (and Pocketbook) by Riding the Double Decker Bus

There are plenty of ways to get around the strip. Hoofing it by foot is the cheapest, but it’s taxing on your feet. We purchased 24-hour bus passes for our family. The pass cost $8 (other prices are available), and give unlimited access to the RTC buses during that time frame. The buses make stops around the strip. One stop was directly in front of the resort in which we stayed. A bus arrives every 15 minutes.

The kids loved the double decker buses. They quickly went up stairs scouting seats each time we rode the bus. They discovered the best seats were on the top floor at the front of the bus. After making that discovery, the kids made a beeline to the front seats each trip.

If we knew the bus would be so much fun for the kids, we could have saved a lot of cash on other activities on the Strip.

While Las Vegas will always be a playground for adults, there are an increasing number of activities for kids and families. You should have some preemptive talks about the casinos, drinking, and show girls prevalent in Sin City. However, families will enjoy a number of activities in the city.

We find family friendly attractions in and around Reno, Nevada. 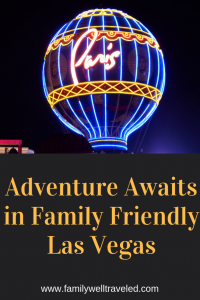 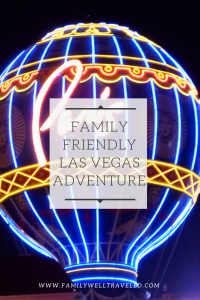