Ultimate Guide to the Cliff Palace Tour at Mesa Verde 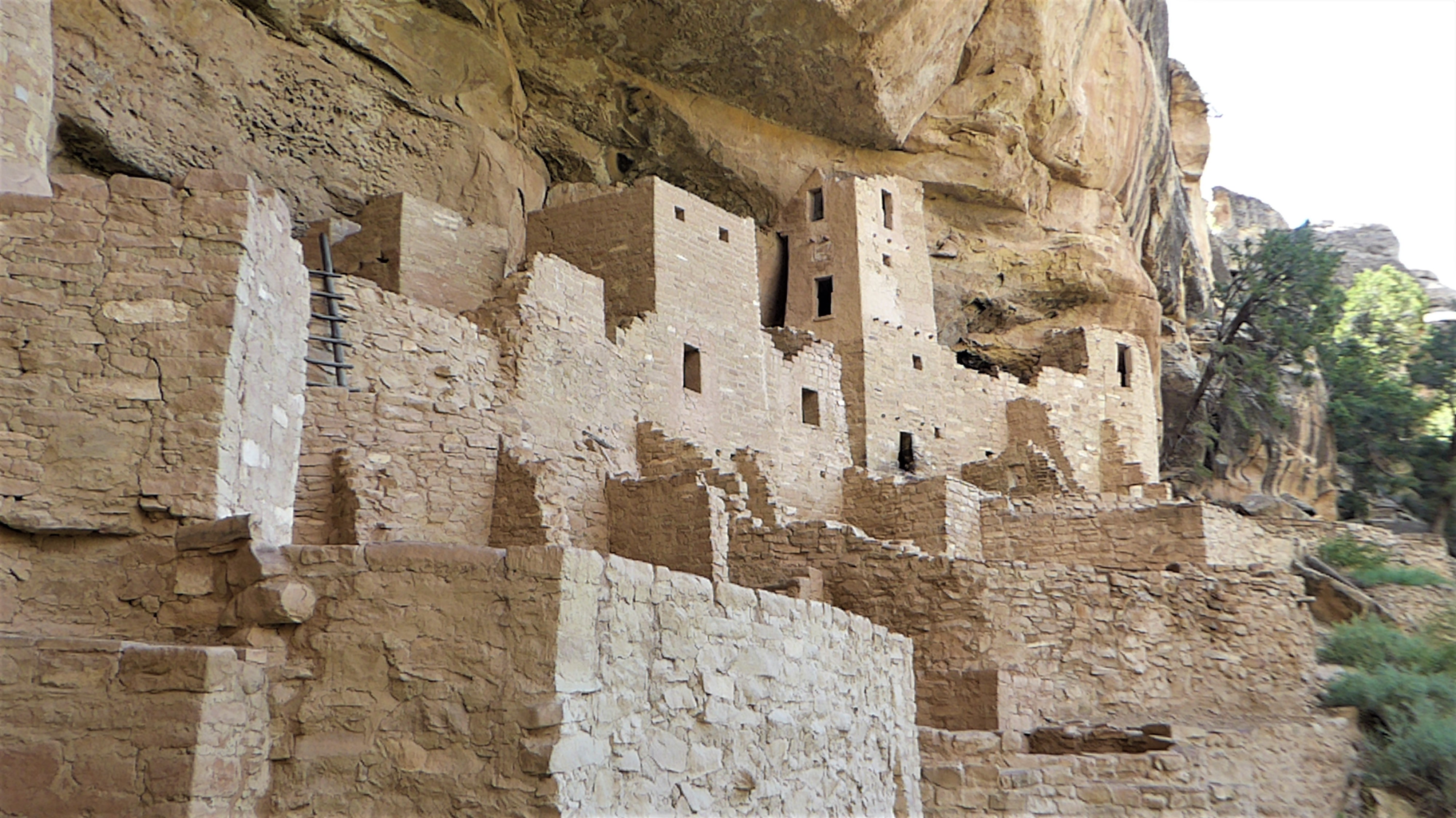 Mesa Verde National Park, located in the southwestern corner of Colorado has captivated tourists for decades since two cowboys happened upon Cliff Palace in December 1888. Since then, Cliff Palace has been the quintessential stop for those admiring the cliff dwellings at Mesa Verde. The National Park Service provides tours of Cliff Palace between April and October each year. Privileged to take the tour, we present an ultimate guide to the Cliff Palace Tour.

What makes Mesa Verde so fascinating is the mystery surrounding the departure of the Ancestral Pueblo people around 1300 A.D. Many theories abound regarding their sudden departure from the valley. People conjecture that famine, fire, drought, or enemies brought about the transition of the people from Mesa Verde south to present day New Mexico and Arizona. Modern Day ancestors claim that it was time to leave the region.

Cowboys Richard Wetherill and Charles Mason discovered the Cliff Palace structures in December 1888 while searching for stray cattle on the snow-bleached mesa. The cowboys are the first modern Americans to find Cliff Palace. For the next 18 years, the men made expeditions into Mesa Verde collecting artifacts and exploring.

Cliff Palace is one of the largest dwellings at Mesa Verde National Park. The structures contain 150 rooms and 22 kivas (a circular religious structure that could be equated to an in-home chapel). The Ancestral Puebloans built rooms on the sandstone “floor” and into the recesses of the cliff using sandstone, mortar, and timber.

As one of the largest and most famous of the cliff dwellings, Cliff Palace was a popular site for early “archaeologists,” many of whom ransacked the artifacts. Today, access is limited to tourists and Park Rangers, although ancestors of the Ancient Pueblo now living in New Mexico, Arizona, and Texas have unfettered access to the structure.

Tours meet every half hour and last for one hour. Tickets for the tour can be purchased up to two days in advance at the Visitors Center or the Archaeology Museum near Spruce Tree House. This is a popular tour, so tickets can sell out and tour groups may include 30-40 people.

Your Park Ranger walks you through the aspects of the tour. The tour does include climbing up and down a number of steep sandstone steps and ascending ladders. The tour involves about .25 miles of walking, although the walking is scattered throughout the hour.

Rangers are knowledgeable and answers questions throughout the tour.

While you get to walk over the cliff dwellings and look into a room, much of the rooms are off limits. Also, Rangers discourage touching the brick or mortar, since oily residue stains and darkens the structures. The sandstone is not off limits, and you can walk on and touch it as much as you like.

The Descent Down to Cliff Palace

After a brief introduction, your tour group heads past a gate and down a number of sandstone steps. The steps were built by the National Park Service shortly after Mesa Verde became a park site. Some of the steps are steep and narrow, and moisture can make them slippery. There are a number of handrails to assist you, but there are some areas without handholds, so be careful.

Once you get off the steps, you cross a narrow sandstone walkway into the Cliff Palace dwellings. Our son is afraid of heights, so I encouraged him as he walked over the walkway, asking him to hug the cliff wall for assurance.

After you make your way down and into Cliff Palace, it is time to sit, learn, and admire the craftsmanship of the structures. The Ranger seats you within the cliff dwellings and tells some of the history of Cliff Palace.

While it was once believed that the Cliff Dwellings were built in order to protect the inhabitants from their enemies, these ideas are changing. We know now that the cliff dwellings were painted in bright colors and would be easily seen from the valleys below or the mesas above. Time has washed away the vibrant colors or the structures, leaving the beige or light red bricks and mortar today.

The mesa was very populated when the Ancestral Pueblo made Mesa Verde home. It is highly unlikely that they moved into the cliff side in order to hide from enemies.

We also learned that given the right conditions, sounds from Cliff Palace can be heard far away at the neighboring Wetherhill Mesa and its structures, such as Long House. So Rangers believe that the inhabitants of Cliff Palace could have had loud religious ceremonies or celebrations replete with shouting or banging of instruments. In other words, instead of hiding from foes, Cliff Palace residents may have preened like a peacock in search of a mate.

We had ample time during this portion of the tour to ask questions and to admire the structures from afar. Here we were better able to see the depth of the cliffs and see that the rooms recessed into the cliff much better.

In the Heart of Cliff Palace

A kiva is a circular room that was the center of family religious ceremony. It is comparable to an in-home chapel. The kivas had thatched tops and were entered from the roof by ladder. Kivas were well ventilated, and the Ancestral Pueblo masterfully crafted the structures to optimize air flow in the chapel. Today, the roofs are long gone, and tourists look down on the structures. At the center of the kiva is a hole , where ancients thought spirits rose from the world of the dead.

The End of the Tour

After circling the kiva, our Ranger asked us for our thoughts on why the Ancestral Pueblo left Mesa Verde in the 1300s. No one knows the answer. Some conjecture that drought, plague or enemies may have forced them south. We know that their meat sources, such as deer and elk became scarce, forcing some to eat the chickens and turkeys that had been their pets before.

During our tour, one woman made a strange conjecture that the Pacific Islanders, after moving to South America, drew the Ancestral Pueblo away from Mesa Verde into central and South America. Our Ranger guide patiently listened to her theory until finally telling her that there was no archaeological evidence to support this theory. However, we had a good chuckle over this theory.

Our Ranger guide told us that the answer to this question is unclear, but that the descendants of the Ancestral Pueblo say that it simply was time to move on. Their cultural stories tell of a migratory peoples, so maybe after 700 years in one place, it was simply time to move on.

We then had the opportunity to look up in one room to see artwork on the inside walls. Like peoples of all times, the Ancestral Pueblo created art to beautify their dwellings.

This was the official end of the tour. Our Ranger stayed behind to answer some questions, and we were instructed to leave the cliff dwellings via the path most likely used by the inhabitants to enter Cliff Palace.

While the descent into Cliff Palace was mildly strenuous, the exit from the tour was steep and taxing. Some of the ascent involves climbing steeply inclined sandstone steps. Here you can see the foot and hand holds carved into the sandstone used by the ancients.

The exit also involves climbing a series of pitched ladders. The key is to not look back or down. Press forward. After finishing the climb, I admit that I was winded, even though I am acclimated to a high-altitude environment. Those not adjusted to the high altitude should take their time and rest as appropriate. On a side note, carry lots of water with you on the tour. While it lasts only an hour, water is essential during the warm summer months when the tours take place.

Have you been on the Cliff Palace Tour? What did you think? Please let us know your thoughts.

Take a tour of Mesa Verde National Park with our guide. 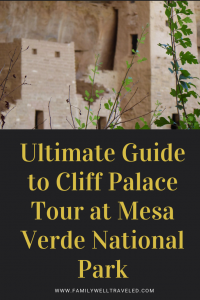 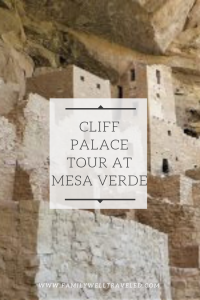