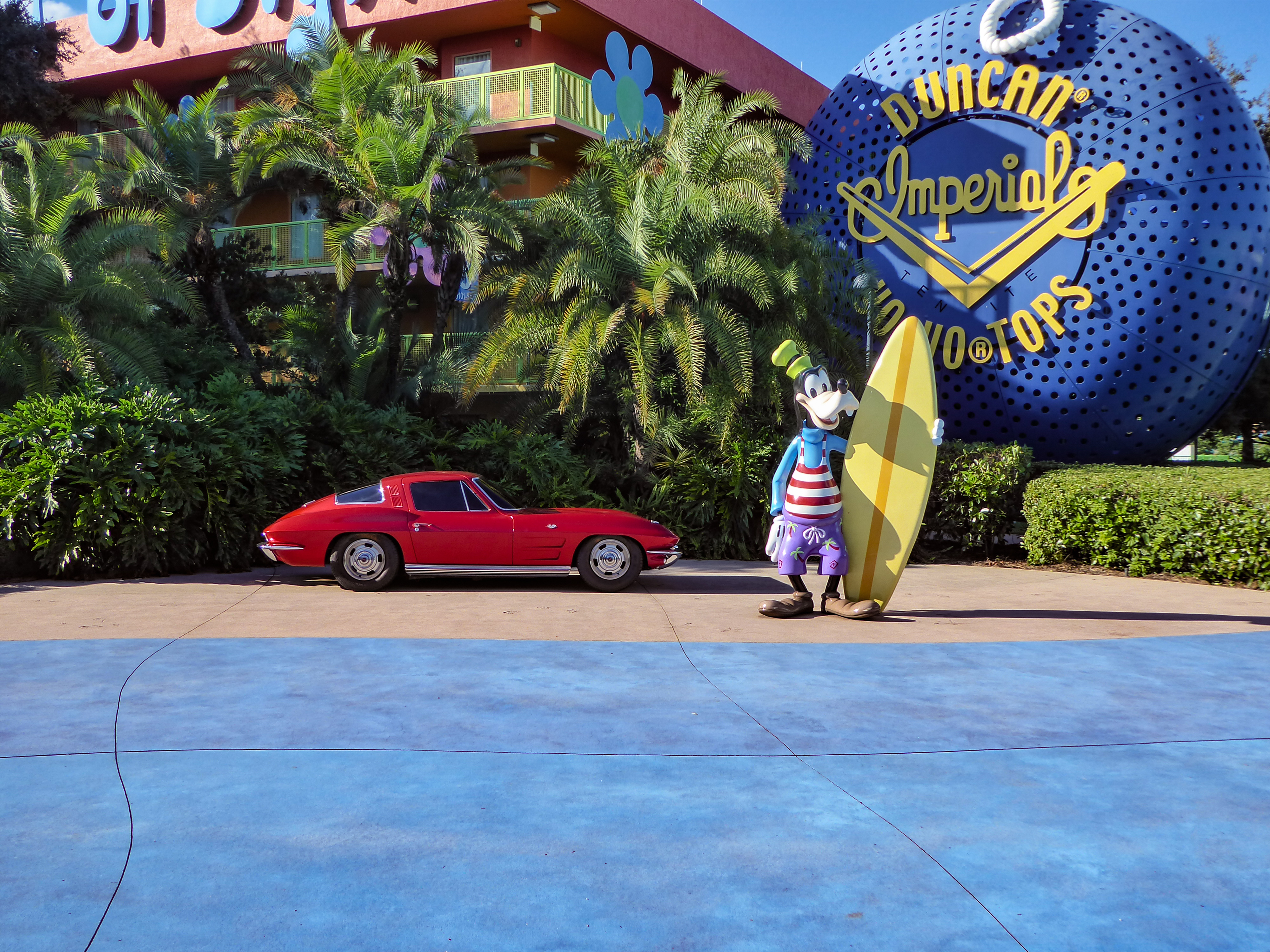 What do you do when your meticulously prepared vacation plans go awry? This was our experience during our family’s fall break vacation. We cruised through Hurricane Michael and lost a port day when the tender boats were unable to meet our ship at Grand Cayman. We looked forward to our trip to Disney World. Following our cruise, we drove to Orlando, anticipating our stay at Disney’s All Star Movie Resort. Unfortunately, at check in, we were told there was no room for us, but we were being upgraded to a poolside room at Disney’s Pop Century Resort.

We were bummed. We planned on staying at the All-Star Movie resort for months. Disappointment set in when we received this news. We tried, however, to make the best of it.

Fortunately, the staff at Disney’s Pop Century Resort turned our disappointment around. Understanding our frustration, the Pop Century Cast Members immediately gave us additional Fast Passes to the Magic Kingdom. That was very kind. Additionally, the next day upon learning of a cancelled flight to return home, the staff again aided us finding an additional room at the resort for our unexpected extra day’s stay.

I’m sure we overwhelmed the Cast Member checking us in to our room. We were miffed since we lost out on a stay at the All-Star Movie Resort. Although we got an upgraded room with a poolside view at no additional cost, it was not what we anticipated. We were grumpy and very vocally expressed our disappointment.

Our Cast Member really took the time to listen to us. She understood our frustrations, trying to reassure us that the Pop Century Resort would exceed our expectations.

After checking us in, she took time to make sure our Magic Bands had all of our room keys, Magic Kingdom tickets, and Fast Passes properly attached. She then did something special. She spoke with her manager about our change of plans and worked to get three additional Fast Passes linked to each of our Magic Bands. These Fast Passes could be used on any ride at any time in the amusement park.

The lobby has Pop memorabilia from the 1950s to the 1990s. As an added bonus, during the noon hour, Cast Members found space on the lobby floor to dance to “The Hustle.”

The check-in desk, lobby and concierge desk are in the Classic Hall. The Classic Hall also houses an arcade, which we looked at, but did not have time to play in.

The Classic Hall includes a Gift Shop filled with Disney fare and a dining hall. During our two-day stay at the resort, we ate one breakfast, one lunch, and one dinner in the dining hall. For breakfast, we purchased donuts and muffins. For lunch, we had meatball sub sandwiches, pizza, and salad. Our dinners included spaghetti with meatballs and hot pastrami sandwich. The serving sizes for lunch and dinners were huge, and seemed a good deal for the price (meals range from $10-$15 and come with sides). The dining hall also has a kids menu which saved us some money.

We stayed in a room in the 50s hall and one in the 60s hall. The resort divides buildings by decades, having a building for each decade from the 1950s through the 1990s. While each building is decorated specifically for the represented decade, the two rooms we stayed in were identical. I assume that all the rooms in the recently redesigned resort are identical.

Each family member accessed the room with our Magic Bands, which linked to the door lock. This was convenient, because all four of us could get in and out of our room at will.

Across from the beds was a large dresser and big-screen television. The television included a station dedicated to the Disney World Resort and, of course, the Disney Channel.

The bathroom consists of two areas. First is the sink and vanity which included shelves and storage space, iron and ironing board, and hair dryer. You can close the sliding barn door in this area, separating the room from the bedroom/living area. The second area,, which also has it’s own slider door, includes the toilet (which had frighteningly good water pressure) and bathtub/shower. Disney stocks the shower with quality natural body wash, shampoo, and conditioner.

Each room had a connecting room, but during each night we did not hear noise coming from either connecting room. In fact, we heard very little resort noise from our rooms.

The Hippy Dippy pool is the central pool at the resort. Here, staff provide pool party activities including poolside movies and games. Music plays around the pool. Nearby, you find Petals, a cabana-style bar, a kiosk where you can get a henna tattoo, and a ping pong table. Our kids enjoyed a game of ping pong during the evening when temperatures cooled down.

We played in the 1950s pool. I enjoyed the towel station, which included shelves with bowling balls. This pool also had a volleyball net for those wanting to play a game of water volleyball.

Pool depths are about 3 1/2 feet, and lifeguards are on duty at each pool. We comfortably relaxed on lounge chairs while our kids played endlessly in the pool.

Since our trip was extended by a cancelled air flight, we needed to do laundry during our stay. Fortunately, Disney’s Pop Century Resort has laundry rooms on site. We purchased laundry soap in the room, and charged both the soap and the washer and dryer run cycles with a credit card.

Walking Around the Decades Buildings

We loved walking around the resort and seeing all the special decorating touches Disney added to each Decades Building. We appreciated that there were Disney Character sculptures in each decade, too, since we were looking forward to Disney character themes at the All-Star Movie Resort.

Here is a look at some things you’ll see walking around the resort.

It really was hip to be square at the 1950s buildings. In addition to the bowling pin-shaped pool, you find a giant Juke Box near the pool. It was fun reading the clever song titles on the playlist.

One of the iconic Disney movies from this decade was “Lady and the Tramp.” We enjoyed the sculptures of the dogs on either side of the bowling pool.

While the Hippy Dippy pool is the central feature of the 1960s buildings, we also loved seeing the giant size Play-Doh.

We couldn’t get enough of the Bear Necessities of a larger than life Baloo and Mowgli from “The Jungle Book.”

And giant Duncan YoYo’s surround the stairwells of the 1960s buildings.

I think these buildings had my favorite sculptures with a gigantic Hot Wheel and a Foosball game. I felt like I was the ball in the middle of the large Foosball players.

Also, you can play Twister with a permanent Twister board painted on the cement.

Roger Rabbit is the featured Disney Character in this decade.

The stairwells are covered by gigantic Rubik’s Cubes. ‘The buildings also have a Walkman Player and Pac-Man Ghosts running in between the floors of the buildings.

The Pop Century Resort provides bus service to all of the Disney parks and Disney Springs on a regular schedule. Outside of the Classic Hall, you’ll find a number of bus stops for all of the theme parks and the shopping area. Simply get in the proper line and wait for your bus to arrive. The resort has a television terminal with approximate arrival times. The buses deliver you back to the resort.

We used the bus for the Magic Kingdom. The bus picked up guests 90 minutes after the park closed, so we had plenty of time to catch a bus back to our room.

Disney also provides bus service to the airport and the cruise terminal if you booked a Disney Cruise.

While initially disappointed with our change of plans, we thoroughly enjoyed our stay at Disney’s Pop Century Resort. The rooms, though not fancy, were practical and amazingly quiet. The staff was beyond helpful when we were very needy. The kids enjoyed the pool, and the parents enjoyed relaxing by the pool. The dining room met our expectations, and the ample food portions exceeded our expectations.

The fun design features throughout the resort made our stay magical and memorable. We’re ready for a return stay at Disney’s Pop Century Resort.

Cruising with Disney? Find out What to Expect on a Disney Cruise 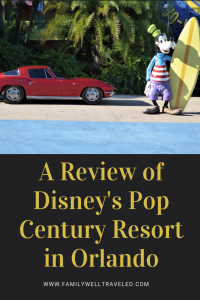 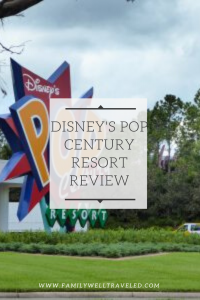