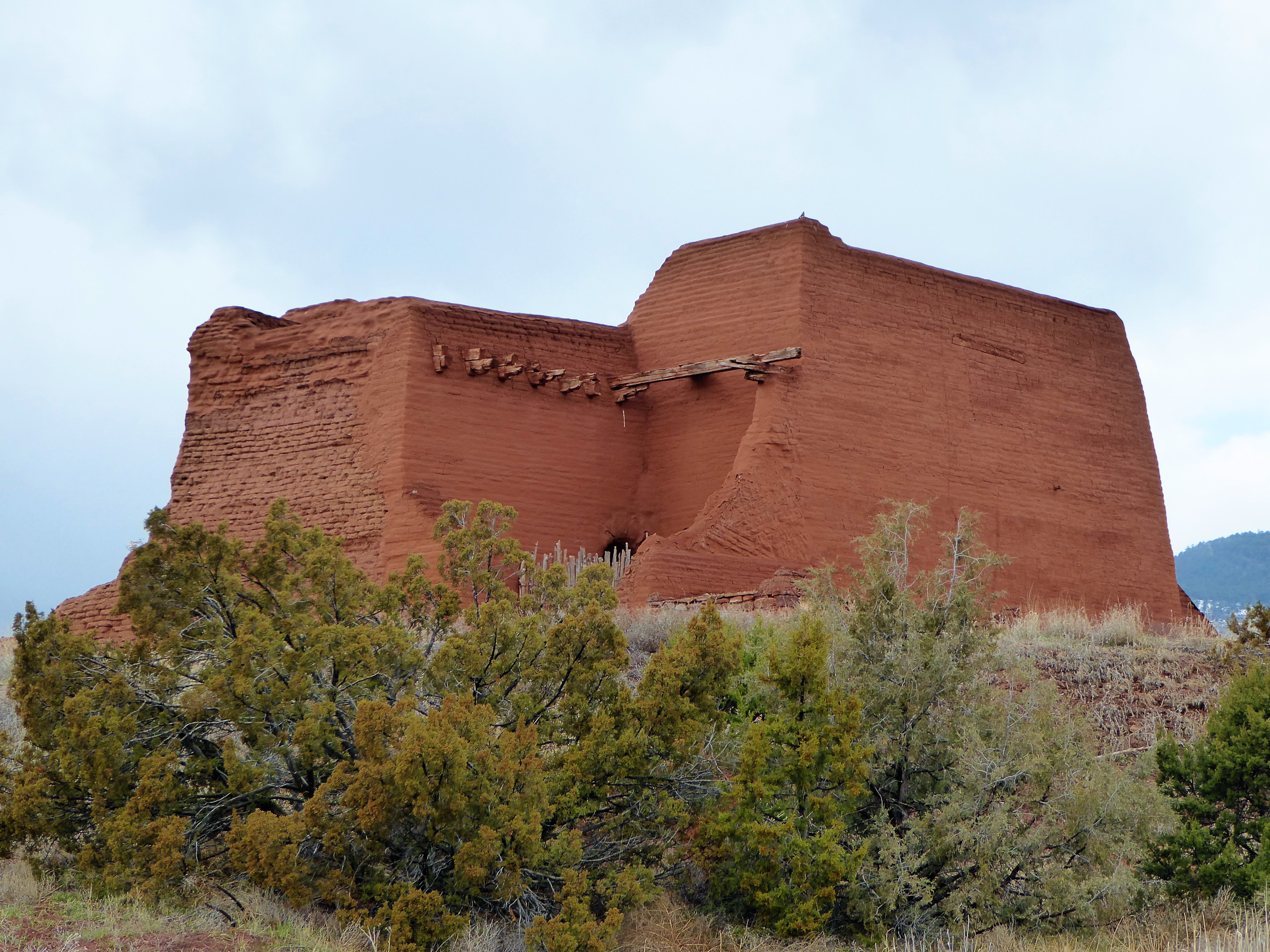 Pecos National Historical Park in New Mexico is one of our favorite National Park sites. It has a little bit of everything. Pecos is full of history. Multiple cultures have met and clashed in the region. Structures have stood long before the English colonists arrived at Jamestown or the Pilgrims landed at Plymouth. It is the site of the most western battle in the U.S. Civil War. The landscape is replete with forest, rivers, flora and wildlife. And, it has a Hollywood connection, too. Seriously, Pecos National Historical Park has almost everything you could want in a National Park site.

Here are eight things your family can see and do during a visit to Pecos.

How to Get to Pecos

Pecos National Historical Park is a couple miles off of Interstate 25 in Northern New Mexico. The park is 25 miles Northeast of Santa Fe — a terrific place to stay and play during a planned visit to Pecos. The drive from Santa Fe takes less than 30 minutes.

You will need a car to get to the site. There is no public transportation to the site from Santa Fe. But hey, you do get to ride on a stretch of U.S. Route 66 on your drive to Pecos.

Pecos overlooks the western edge of the Rio Grande Valley. Situated in the mountains, Pecos was an ideal place for a civilization to form. The Ancestral Pueblo settled the region, utilizing the good farm land and the two rivers (Rio Grande and Pecos) in the area.

A civilization formed with a walled city and homes. Archaeologists estimate as many as 2,000 people lived at Pecos Pueblo at one time. It likely was a popular place on trade routes throughout the area.

Franciscan Friar followed on the heals of the Conquistadors, attempting to bring the Catholic faith to the Pueblo people.

Tensions ran high between the Spanish and the Native Pueblo. The Pueblo revolted against the Spanish in 1680, burning the church and driving the Spanish away temporarily. However, the Spanish reclaimed the region with brute force.

One hundred fifty years after the revolt, a new white settler rode into Pecos on covered wagons. These U.S. settlers followed the Santa Fe Trail through Pecos. They found Pecos is ruins, with only a handful of Native Americans on site.

When the U.S. Civil War erupted in 1861, New Mexico was a fiercely sought commodity. Its proximity to Texas appealed to the Confederacy. In an attempt to win New Mexico to the Rebel cause, Confederate troops moved into the region. However, they were soundly defeated by the Union army is a swift battle. The 1862 Battle of Glorieta Pass secured New Mexico as a Union territory for the duration of the war.

Take in a Video at the Visitors Center

You should start your tour at the Visitors Center. Here you can get  map of the park, directions to the Civil War battlefield, and information for a self-guided tour around the Pueblo village and church site.

The Visitors Center also has a 12-minute video introduction to Pecos. The video highlights the historical significance of Pecos. It is narrated by Academy Award winning actress Greer Garson, who owned the ranch on site at Pecos.

The theater was one of the most impressive theater rooms we have seen at a National Park site, and includes pottery from the site.

While at the Visitors Center, Check out the Museum

The museum inside the visitor’s center is comprehensive. The history of Pecos in unveiled through a number of display cases and exhibits. You’ll find Ancestral Pueblo pottery and tools; Spanish Conquistador swords; Civil War artillery, and more.

If you don’t have time for a hike around the Pueblo grounds, this would be a great place to learn (and see) the historical context of Pecos. It truly is a crossroads of many cultures, and the museum allows you to experience that.

Hike Around the Ancestral Pueblo Sites and Photograph the Spanish Church

You may opt for a Ranger-led tour of the site. However, you also can take a self-guided tour. You can get a laminated packet at the Visitors Center. Then you can read about the history at each route marker along the way.

Here is what you’ll see along the self-guided walking tour:

The Spanish church is the iconic structure at Pecos. While you can grab pictures of the wall around the pueblo and some pueblo dilapidated structures, the church is the largest and most impressive spot for a photo.

Descend a Ladder into a Kiva

We have visited many Ancestral Pueblo locales in the Southwestern U.S. We have seen many kivas (circular ceremonial rooms) in each of these locales. However, these kivas are without roofs and we have looked down into the kiva. At Pecos, you actually can take a ladder down into a reconstructed kiva.

While we enjoyed getting a view from a kiva from on high, it certainly was more intimate and meaningful to climb down the ladder into the center of religious activity among the Ancestral Pueblo. Being in a kiva allows you to see the size and feel of the kiva as the Pueblo would have experienced it.

And you can climb down into not one, but two kivas at Pecos. Definitely a highlight of the Ancestral Sites walk.

Look for Wildlife Throughout the Park

With forest, rivers, mountains, and grasslands nearby, you know that Pecos abounds with wildlife.

During our visit, we spotted a roadrunner (the official animal mascot of the park) during our self-guided tour. Unfortunately, the little guy was too quick for us to get a photo.

This was our favorite part of visiting Pecos. After our walking tour, I mentioned that we were interested in seeing the battleground. A volunteer jumped into action, grabbing a map, offering a $2 booklet which explains the route markers at the battlefield, and giving me direction and a map to the site.

But that’s not the best part. On the map, she wrote a code to unlock the padlock for the gate at the battleground site. That’s right. The battleground, located away from the main Pueblo and church, is gated and locked. But, the Ranger and volunteers happily give interested persons access to the lock code. They ask only that you lock the gate when you leave.

After a few miles’ drive from the Visitors Center, I reached the gate, got out of my car to unlock the padlock, and then drove into the battleground site. There is a small parking area and portable restroom on site.

Once inside, you can walk the 2.25 mile path which takes you around the battle site. It is a circular hike, but there is a trail that cuts the circle in half, and gets you to some of the more interesting parts of the battleground. You can ask a ranger or volunteer for that shortcut is you are hiking with small children or others who may not want a full 2.25 mile hike.

Ranger-led tours of the site also are offered.

See the Ranch of a Hollywood Legend

The Forked Lightning Ranch, down the road from the Visitors Center, was once owned by Academy Award winning actress Greer Garson and her husband. Today, you can tour the ranch on a Ranger-led tour with a walk through of the ranch house. However, space is limited.

Kids always enjoy completing a Junior Ranger book and earning a badge or patch. It’s no different at Pecos National Historical Park. Drop by the Visitors Center at the beginning of your visit to pick up a Junior Ranger book. Kids earn a badge for completing a number of activities. If they complete more activities, they also earn a sweet patch. The patch was enough incentive for our daughter to complete extra activities.

Our guide to Six Underrated National Parks in New Mexico.

Heading to New Mexico’s Capital? We have a guide to fun family activities to do in and around Santa Fe. 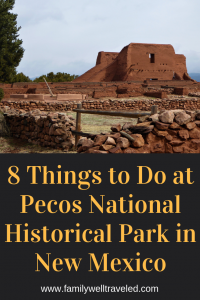 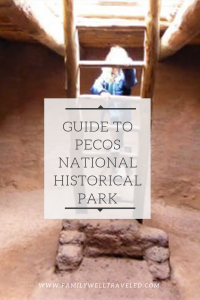