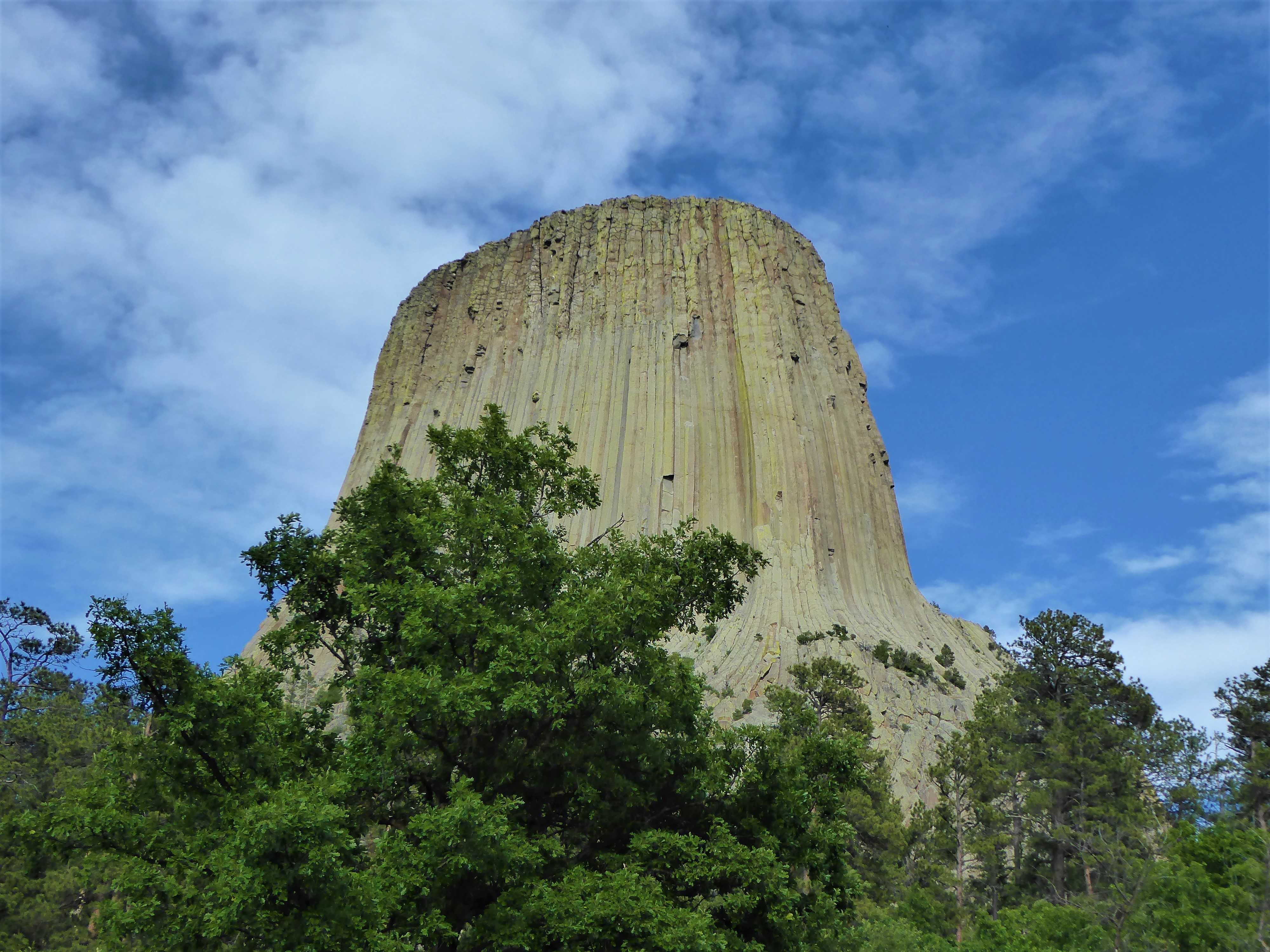 How Did Devils Tower Form

Devils Tower really is a striking geographical landmark in the middle of barren northeastern Wyoming. The drive to the monument from Interstate 90 is striking. You drive through rolling hills and grasslands. You pass the Belle Fourche River. As you drive past trees and shrubs, you begin to wonder if you have taken the wrong turn.

And then you see it. As you drive around a bend along a rolling hill, this massive igneous rock butte rises 1200 feet out of nowhere. It can be seen for miles. Devils Tower is the only high peak of any kind in the region.

Devils Tower formed after volcanic activity forced molten lava upward to the earth’s surface. However, the phonolite porphyry (igneous rock) cooled below the surface, forming the tower’s columns. Years of erosion slowly drove away the surrounding earth, leaving Devils Tower exposed. Today, the tower rises 867 feet from its base to the top.

The Legend of Devils Tower

Before we knew the geologic reason for the formation, many legends circulated about the Tower’s formation. Many of these oral traditions, from different Native American people groups, have similar elements and features. You can read some of the legends from various people groups here.

One of the legends that most appealed to our children is the Crow’s tale. Two girls, camped at “Bear’s House” (the Crow name for Devils Tower), played near the rocks were bears lived. One bear decided to eat the frightened girls, who climbed a rock. The Great Spirit, seeing the bear about to eat the girls, made the rock grow taller and taller, keeping the girls from the bear’s clutches. The bear, however, tried jumping to the top of the rock. However, it could not grasp the top, slid down the rock. leaving claw marks around the rock. The bear never reached the summit, and according to legend, the two girls still live atop the rock.

A Sacred Site to Many 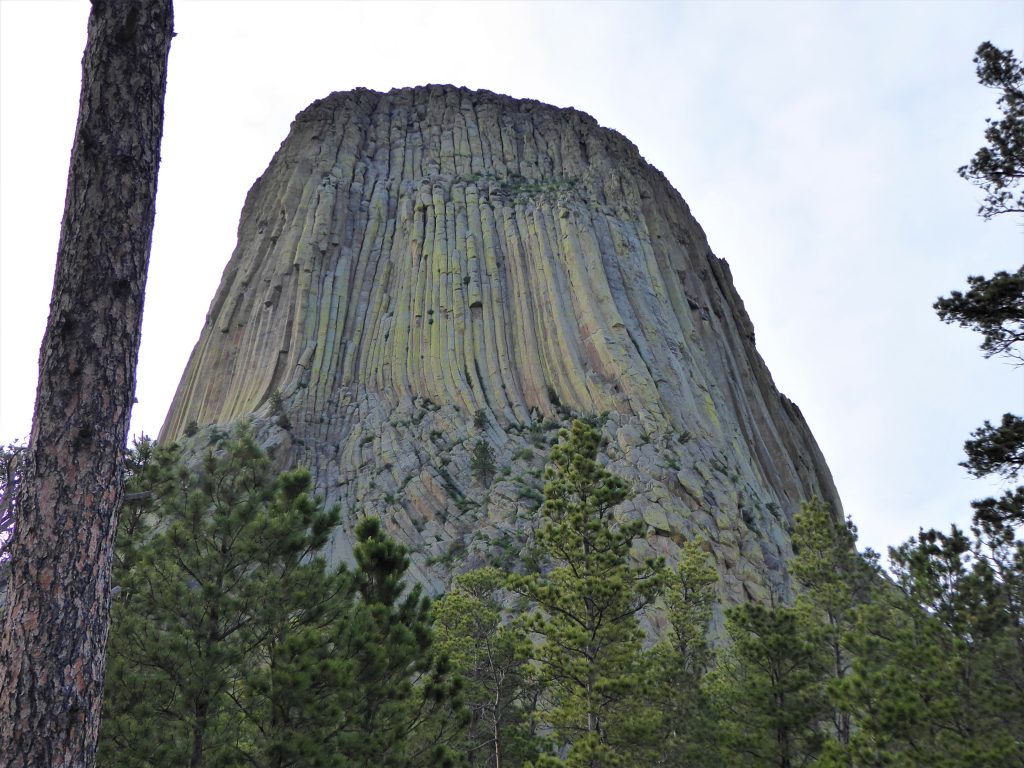 According to all of the stories, many bears once roamed the area. Many Native American people named the tower “Bear’s Tipi” or “Bear’s Lodge.” Most believed that a Great Spirit placed the Tower for a sacred purpose, and many went to the rock to worship in this holy place. Even today, many religious ceremonies take place at Devils Tower, and you can find prayer cloths tied around trees throughout the National Monument.

Although the Tower goes by many names, it was designated at Devils Tower when Theodore Roosevelt used his executive privilege to designate the monument in 1906. A clerical error left out the possessive apostrophe, listing the monument as Devils Tower, rather than Devil’s Tower. Although officially recognized by the name Devils Tower, there are many who feel the monument should be renamed to recognize the many Native American names for the rock formation.

Now that you know the history and legend of Devils Tower, here are the best activities to do with your family at the nation’s first national monument.

Hike Around the Tower

Once you get into the park, you’ll want to drive three miles to the Visitors Center. Parking next to the center may prove problematic (especially during peak season), but there is more parking nearby.

Pro Tip: Arrive to Devils Tower in late afternoon or early evening. It is easier to find parking. We arrived around 5:30 p.m. and found a parking spot adjacent to the Visitor Center.

From the parking lot, follow the trail to the 1.3 mile paved Devils Tower Trail. The trail circles around the one mile wide base of  Devils Tower. The trail is fairly level, although there are some steps and elevation gain of 157 feet. You need to keep an eye on the path, as it is uneven in spots. This proves difficult because most of the time, you look up at the tower.

The trail allows you to see Devils Tower from a 360 degree perspective. You may find climbers on the rock (although we went during June when there is a voluntary climbing ban out of respect for religious ceremonies held that month). You also see amazing vistas of the valley below and the Belle Fourche River winding it’s way around the tower.

During our hike, we found a number of prayer cloths hanging in the trees. People leave the prayer cloths for a number of reasons, including honoring their ancestors. Of course, you should not take the cloths, although pictures are alright.

As with all national park sites you are not allowed to take objects from the monument or the trail. We were upset as we watched parents allowing kids to gather handfuls of wildflowers or walking off trail. Respect the park and the follow the directions of the signs throughout the park.

Throughout the hike, we found remnants of columns fallen off of Devils Tower. Some of the columns are 600 feet tall. There is a large boulder field at the start of the trail — evidence of erosion throughout the years.

While on the Devils Tower Trail. you pass an area with view finders. Take a peak into the view finders and see ladders bolted into the tower once used to ascend the peak.

The story of the first climbers on Devils Tower is a fun one. William Rogers and Willard Ripley made the first summit climb during Independence Day celebrations on July 4, 1893. However, there is some mystery surrounding the climb. Once they reached the top of Devils Tower, they hoisted a United States flag atop the tower. Where did the flag come from? Neither man carried the flag during the climb. So someone trekked to the top (probably the day before) leaving the flag for Rogers and Ripley to hoist. So the first official summit was made earlier — although Rogers and Ripley may have made that climb too.

Get a Grip with a Grappling Display at Devils Tower

Next to the parking lot, near the start of the Devils Tower Trail, we discovered a fun display. You safely try your hand at rock climbing. Since we visited during the voluntary climbing ban, we did not see anyone traverse the Tower. However, we got an idea what it would look like.

The display allows you to try the tools climbers use on their ascent. Our kids realized how challenging a climb to the top would be.

Learn More About Devils Tower at the Visitor Center

Well, you’re already parked there, so you should check out the Visitor Center. Here, we discovered different Native American names for the Tower, as well as geological and historical information about the rock. The facility is a bit small, and we did feel crowded at times, but the Rangers took time to meet with everyone and answer questions.

The Visitor Center was built in the 1930s by the Civilian Conservation Corp and is listed on the U.S. National Register of Historic Places.

Here, also, kids can collect their Junior Ranger book and receive their badges upon book’s completion.

The gift shop provides an ample supply of mementos and memorabilia to remember your trip. Our kids had money to burn and found some good deals at the gift shop.

Spot Wildlife Throughout the Park

Right past the entrance station, we found Prairie Dog town. The animals filled the field. We enjoyed listening to the chirp warnings. And we delighted in watching them “kiss” where they touched noses in order to communicate.

We also spotted a few deer, including a mother and fawn. Unfortunately, they ran away before we could snap a picture. However, we did find other deer meandering slowly through the fields. We did snap their pictures.

During our hike along the Devils Tower Trail, we found a number of squirrels, birds, and butterflies.

Fortunately, no bears chased us up the side of the tower during our visit.

We visited the park during late afternoon, just before sunset. So animals were active, feeding and finding water before bedding down for the night.

Take in the Peace Sculpture in the Park

Near the campground and administrative building, we stopped off to see the Peace Sculpture. The sculpture, created by Japanese artist Junkyu Muto, is the third of seven planned peace sculptures around the world. Two others are in Vatican City and Bodhi, India.

The Circle of Smoke Sculpture depicts a common ceremony among Native American people. During the ceremony, a peace pipe is passed among leaders. Leaders blow out a circle of smoke.

Our trip to Devils Tower National Monument was an opportunity to see how sacred and special the tower is to so many people. It is no wonder people have marveled at the site for hundreds of years. Special and awe-inspiring are words to describe the site, but they are not enough. It does draw people from around the world to see it in person. We were some of those people.

The site has long been on our list of places to visit. Our daughter wanted to visit for a long time. After our time at Devils Tower, I asked the kids if the visit was worth the wait. Both responded quickly and enthusiastically, “Yes.” I, too, left Devils Tower feeling kinship with the many who have been drawn to the site throughout the year.

Everyone needs to visit Devils Tower National Monument at least once in a lifetime.

While in Wyoming, explore Fort Laramie and see how U.S. soldiers lived in the 1800s.

Discover the Amazing National Park Sites in nearby South Dakota. 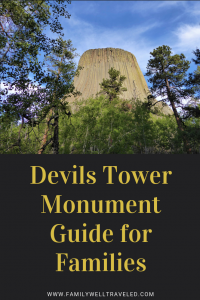 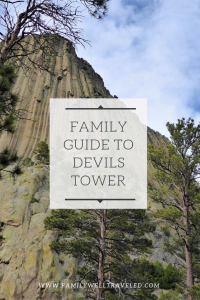