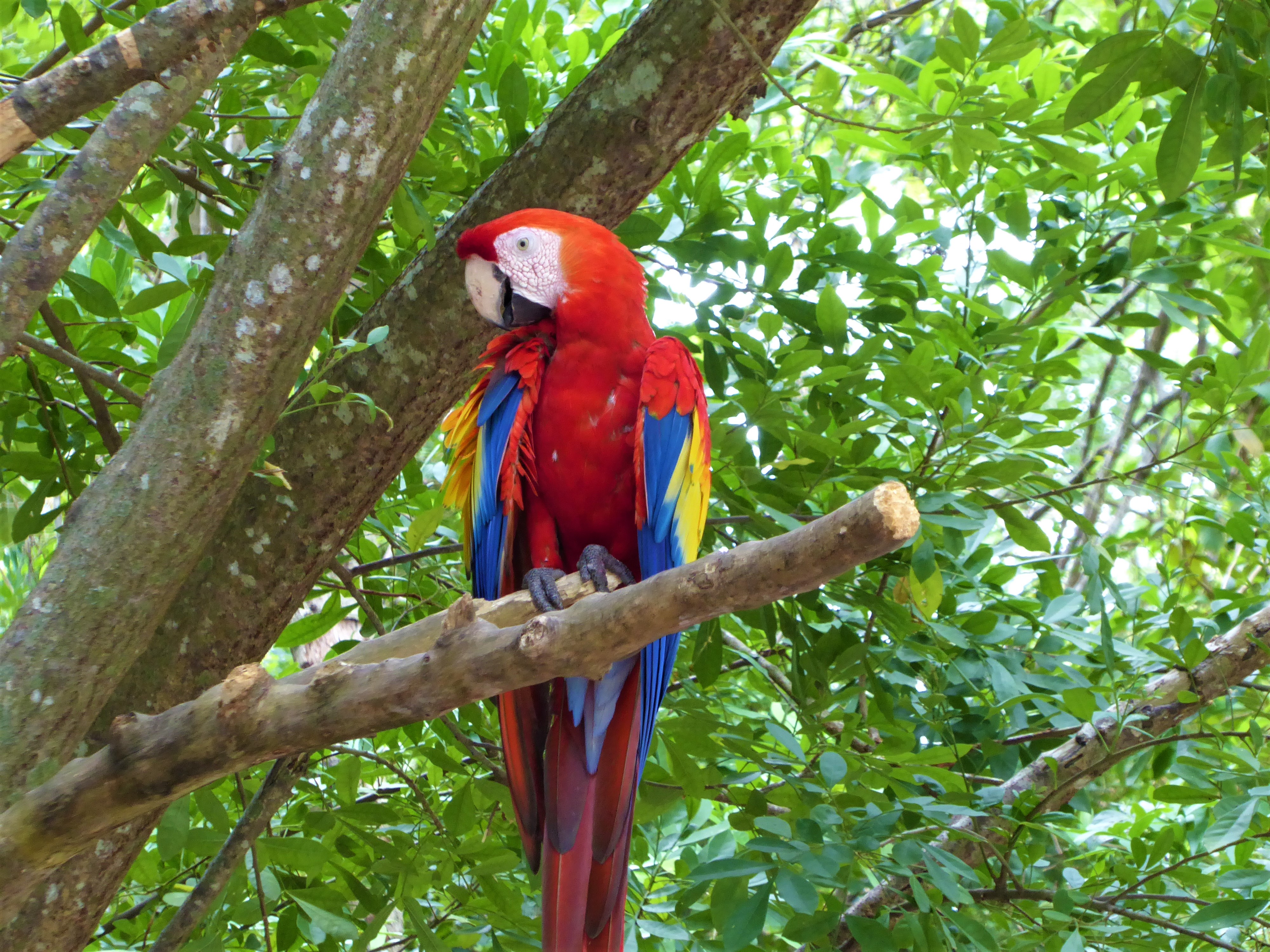 Honduras is not a popular vacation destination. In fact, the country has one of the highest homicide rates in the world. However, Roatan Island just off the mainland of Honduras, is a popular and relative safe destination. Cruise ships dock at Roatan regularly. On West Bay, you find Gumbalimba Park Animal Preserve. The beachfront site boasts of stunning views, walking tours, zip line, and the opportunity to interact with birds and monkeys.

Our family visited Gumbalimba Park as part of a cruise shore excursion. Here is everything you need to know for an enjoyable day at the park.

Getting to the Park

West Bay is a 45-minute drive from Roatan Island’s Cruise Ship port, Mahogany Bay. During the drive, our tour guide talked about Roatan Island, including industry, education, and life on the island. When we reached the park, we were given wristbands, access to lockers (so that we didn’t have to carry backpacks on the walk), and opportunities to use the restrooms.

Then it was off on our walking tour of  Gumbalimba Park.

Here are Ten things you can see and do on a trip to Gumbalimba.

1) Look for the Green Iguanas

On our adventures throughout the Caribbean, we’ve become familiar with the green iguanas. They pop up everywhere around the region. But, they were everywhere at Gumbalimba Park. We found them running around the lawn, eating strategically placed veggies, climbing trees — everywhere.

I don’t think you could miss these guys, even if you weren’t looking for them.

2) Eat an Almond Directly from the Tree

The park has a number of almond trees. The fruit was ripe when we visited and we got to taste the almond from fruit. Surprisingly, the seed is encased in a green, furry pod. We didn’t expect that. Everyone had a chance to try the ripe almond, which tasted slightly different from the nut we’re used to.

3) Cross the Rope Suspension Bridge if You Dare

As you leave the beach and the lower park area, you hike up a hill. During the hike, you find a large crevice with a stream running through it.

And, we had a great opportunity while on the bridge to have our tour guide snap a family picture so that we could remember our bravery.

4) Check Out the Creepy Crawlies at the Insectarium

Truth time. Our daughter was grossed out by this stop. Inside a small building, we found the Insectarium. You find a number of beetles and other insects from around the world mounted and showcased inside the building. That was too much for our daughter. She didn’t flee the building in terror, because a number of butterflies also were displayed.

We were intrigued to look at all the insects and butterflies, admiring the variety and intricacies of God’s creation.

5) See if Barney, the Parrot, Will Eat Your Buttons

Now, we are at the heart of the Gumbalimba Park tour. We came to see the parrots and monkeys. After crossing the bridge, we got to interact with the animals.

On our bus ride, we were warned about Barney. He is the resident parrot. You can let Barney rest on your shoulder and get your picture taken with him. However, Barney is a thief. He has an eye for pretty things. He like buttons. Our guide told us that Barney sometimes snags buttons. On the bus, we laughed because I was wearing a shirt with buttons. Wouldn’t it be funny if Barney pilfered my buttons?

Well, Barney did steal my button. While waiting for my picture with the bird, he craned his head toward my shirt, grabbed my top button in his beak, and quickly pulled my button off my shirt. He chewed on the button for a minute before spitting it out.

There are a number of free-flying parrots soaring throughout the park. Sometimes it felt that they were dive-bombing us. Though, I am sure that they were very aware of their surroundings. They flew low, but we never feared they would strike us while in flight.

6) Sit and Watch the Animals Around You

In the center of the preserve, you will find a great number of benches and seats for you to relax and watch the animals — and botanical gardens — around you. Sometimes it’s just comforting and relaxing to take a break and watch everything going on around you.

7) Get Up Close and Personal with Capuchin Monkeys

Honestly, we booked a tour of Gumbalimba Park just so we could have an encounter with the Capuchin Monkeys. The park does not cage the monkeys. They do not have a pen or place to stay at the park. They simply roam among the jungle trees.

Of course, the park staff coax the monkeys with some food items. The Capuchin Monkeys respond to the food, coming down from the trees to interact with the park visitors.

They are very forward and jump right up on your shoulders, back, head, whatever. During our visit, we fortunately had opportunity to interact with a mother and baby. Baby simply hung out on mom, who climbed from person to person. Of course, the baby was mighty interested in us. It would stroke our hair, or climb off mom momentarily to climb around on us.

Staff take pictures of you with the parrots or monkeys for sale.

Pirates once roamed Roatan and all other islands in the Caribbean Sea. Every island has its own tales of pirates and buried treasure. As you enter Coxen’s Cave, you enter the realm of the past, where pirates sailed the sea, terrorizing ships and people. In the cave, you see maps of the area, read about pirates tales and legends, and meet with some of the more notorious scoundrels of the sea.

9) Walk Along the Beach

Gumbalimba Park has a lot to offer, including a beautiful white-sand beach. You can stroll along the beach, or sit in a lounge chair and listen as the waves crash along the shore. The park has some aquatic equipment for rent too if you’d like.

We did not get to zip line while at Gumbalimba Park, but it was an option offered (for an additional fee) after our walking tour. The staff provide equipment and training so that you can propel through the jungle canopy.

And, Eat a Traditional Honduran Meal

After our walking tour, we had a traditional Honduran meal at the on-site restaurant. The restaurant was very busy, and it took us some time to get our meals ordered and delivered, but the food was satisfying.

There you have it — ten things you can see or do on Roatan Island’s Gumbalimba Park. We had an enjoyable day of discovery as we made new animal friends, lost a button, and cringed as the Capuchin Monkeys climbed over us. We were worn out when the time came to get back on the bus for our 45-minute drive back to Mahogany Bay.

Take a tour of the Mayan Ruins of San Gervasio on the island of Cozumel, Mexico.

Spend a day with us at El Mirador Beach in Cozumel. 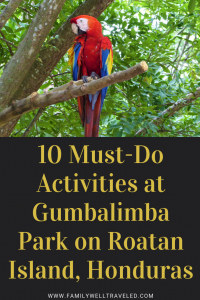 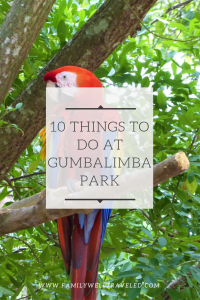