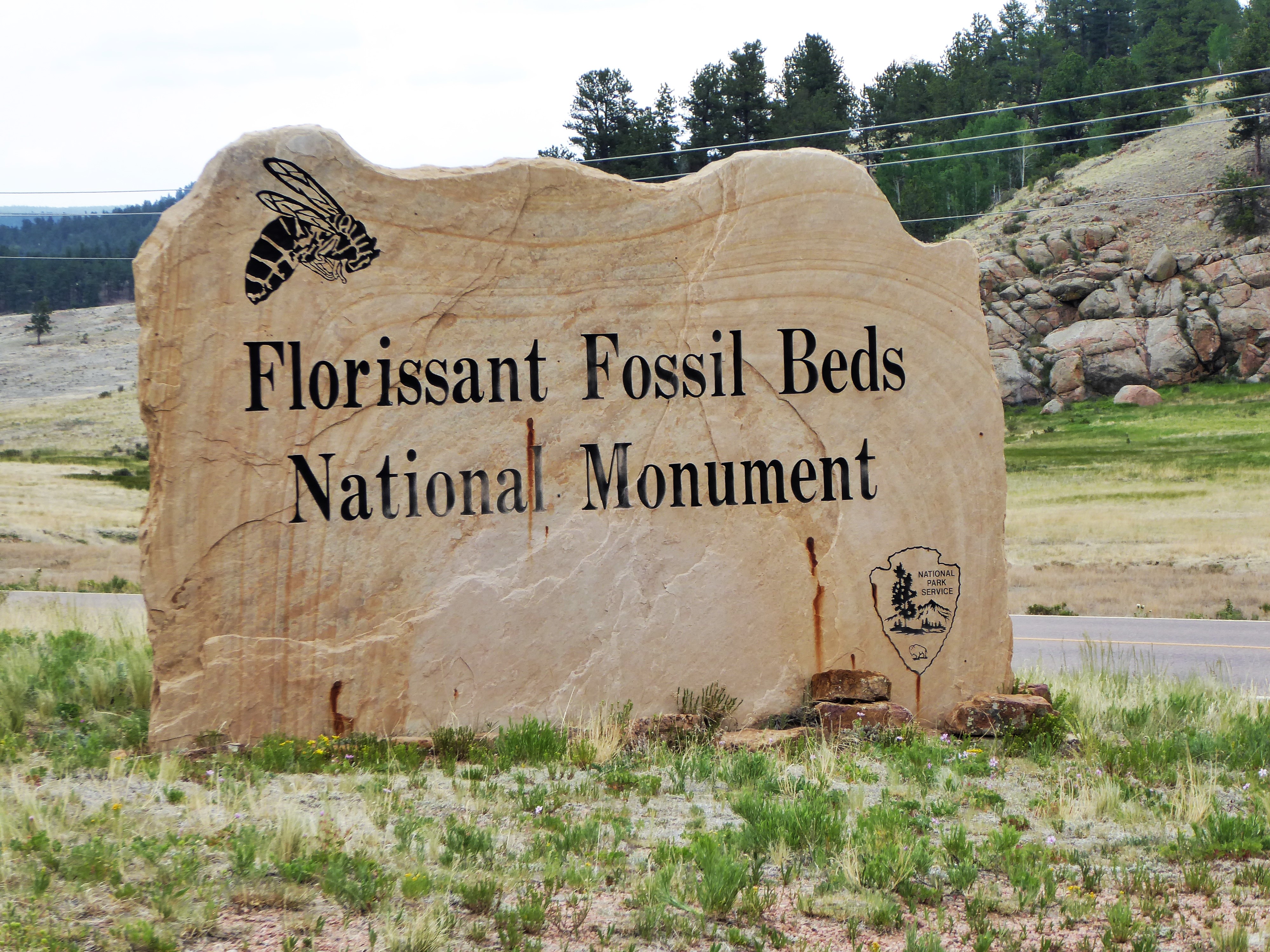 Sometime in the 1950s a car passed through the small mountain town of Florissant, Colorado. The car stopped at what is known today as Florissant Fossil Beds National Monument. The world’s most famous animator stepped from the vehicle. Walt Disney spent time at the site, and bought a petrified tree stump. Some say that he took the stump home to his wife. She was not impressed with that “rock”, preferring a “rock” of a different size and caliber.

We do not know if the story of Disney and his wife is true, but we do know that Walt Disney traveled through Florissant, purchased a petrified stump, and added the stump to Disneyland. The stump still rests at the entrance to Frontierland in the Anaheim theme park.

History of the Monument

Florissant has drawn the interest of people other than Disney throughout the years. From the time of the town’s founding in the 1870s to today, people marveled over the geologic hotbed. Petrified wood stumps from giant Redwoods and Sequoias that once towered 200 feet in the air are found here. People have enjoyed the area for amazingly well-preserved plant and insect fossils in shale from 34 million years ago.

Florissant lies where a prehistoric lake once stood teeming with life, until volcanic sludge from a nearby mount encased and preserved that life in stone. The volcanic ash buried the Redwoods, drying out the lake and forcing the tree roots to absorb volcanic minerals rather than water. This promise fossilized the stump, some measuring 41 feet in circumference.

Long before European settlers discovered the region, Ute and Apache Native American tribes explored and cherished the region. The Ute called it a land of shadows, where fossilized shale showed a past era.

Since the 1870s scientists, miners, homesteaders and tourists traveled to the region to unearth the geologic wonders of Florissant. Trains took tourists to the fields where they dug for fossils in the 1800s. Tourists marveled as a bear danced atop the “Big Stump.” Scientists found well preserved fossil samples that distinctly revealed the veins of leafs and intricate webbing of insects. The fossils from here reside in museums around the world.

The petrified stumps from the giant Redwoods were a draw. In the 1960s, a proposed housing development advertising a petrified stump in every yard drew the ire of scientists and preservationists who lobbied to make the area a national monument. They won this battle, and in 1969 Florissant Fossil Beds National Monument was created. 30 stumps remained buried on site, preserved from the housing development and any other attempts to alter this geologic setting.

What You Can Do at Florissant Fossil Beds

The monument, at an elevation of 8200 feet, is about a two hour’s drive southwest from Denver. While not the largest national park site, Florissant Fossil Beds is packed with things to do. The park is one of nine national park unites dedicated exclusively to the preservation of fossils.

Our family spent half a day at the park, and easily could have stayed another two hours.

Explore the Fossils in the Visitors Center

Every visit should begin here. At the visitors center you can get a map of the monument, get information about daily Ranger talks and walks, and get a Junior Ranger book for the kids.

The center shows a 14-minute movie about the site. You also can learn about the prehistoric geology of the region through interactive displays. Some of the best fossil pieces representing flora, fauna, insects, and fish are on view.

Kids and adults alike enjoy an interactive computer which allows you to explore the site, the work of a paleo-botanist, and the tools of a paleo-scientist.

Walk One of the Trails in the Park

There are a number of walking trails covering 14 miles throughout the monument. Some will lead you around the giant Redwood stumps, unburied for viewing. There also are at least 30 stumps that remain buried within the monument.

The massive stumps help scientists uncover what the region looked like during the Eocene Era, 34 million years ago. The Florissant stumps are like none other in the world, and the site is the only place in the world to see three conjoined Redwood stumps. Redwoods naturally grow in this three-fold way, using a collective root system.

Join a Ranger Talk or Walk

Each day, visitors can join Rangers on walks and talks throughout the park. Our family enjoyed three of these guided tours when visiting.

I took a guided walk that took me on the 1-mile circular Petrified Forest Loop Trail. During the 45-minute tour, we explored the types of rock in the park, saw shale deposit jutting out from a sloped hill, toured the “Big Stump” which is not the largest stump in the park, and saw the Hornbek Homestead.

Our son soaked in the information provided during a bear and mountain lion talk under the amphitheater pavilion. During the talk, we saw a bear pelt and mountain lion skull, while learning about the habits of the two animals. We especially enjoyed learning about he delayed implantation of a female bear. She is impregnated during the early spring. However, she goes through the summer and fall months consuming food. During the fall months, her body will determine if she has enough reserves to give birth, and if she does, her fertilized egg will then attach to her uterine wall. She will then give birth and nurse the babies during her hibernation.

My wife and daughter went on a hour-long guided interpretive walk to learn about the wildlife and vegetation of the mountain region. They enjoyed seeing a tree with markings from both a bear and holes made by birds. Our daughter called it the “Bird Hotel.”

Eat a Picnic Lunch in a Meadow

We have visited the monument twice. During out first visit we traveled East of the visitors center and petrified stumps, finding a quiet meadow and stream for a picnic lunch. The Barksdale picnic area is away from the hustle and bustle of the visitors center and trails. But we enjoyed the peace and solitude while watching butterflies dance in the meadows and wildflowers.

Look at Shale Specimens with a Magnifying Glass or Microscope

More than 1500 different kinds of fossil insect and spiders have been found in Florissant. It is one of the most diverse fossil sites in the world. You can take a look at some of the specimens up close inside the fossil learning lab. The lab is in a yurt near the visitors center. The lab is opened for kids and adults to explore shale fossils using magnifying glass or microscopes. You can chose the shale you want to examine. It is a great opportunity for kids to put on their science hats and explore the vertebrate, invertebrate, and flora samples while navigating scientific tools.

While at the learning lab, kids can create art, identify the different types of rock found at the monument, and dig in sand pits to unearth pre-buried specimens.

Since the monument is protected ground, you cannot remove rocks and fossils found at the site. However, the Florissant Fossil Quarry down the road allows you to dig and keep anything you find in the pit.

Search for Wildlife in the Area

It’s probably not a surprise that an area with thousands of fossilized animal specimens would still teem with wildlife. You won’t go wrong setting up shop and scanning the sky for a variety of birds that call Florissant home.

Scientists have found fossils of ancient fish, birds and mammals. And while you will not find oreodonts (an ancient hog) or brontotheres (an ancient hippo or horse) today, you still can spot some rodents and mammals. Bears and mountain lions roam the area, but you are unlikely to see them during park hours.

However, you may spot a herd of elk (especially enjoyable during calving season), prairie dogs, rabbits, squirrels, badgers or mule deer. Throughout our visit, we saw multiple badger dens and elk scat. We also saw Gunnison Prairie Dogs near the Hornbeck Homestead.

Tour the Hornbek Homestead on Site

Pioneering women were a hardy lot. In 1878, a single mother named Adeline moved to Florissant with her four children (a 5-year-old and three teens). She had been widowed in Denver then met and married Elliot Hornbek. Hornbek, abandoned the family. Evidence suggests that Elliot may have had another wife — maybe two.

Adeline made her way to Florissant and applied for a 160 acre piece of land under the Homestead Act. Here, she and her children built a two-story home (unusual for this region at the time). She was a successful rancher. She also worked at the Florissant Mercantile — a general’s store — and served on the school board.

The Hornbek Homestead, a recreated ranch, lies to the north of the visitors center. Rangers open the home up daily for visitors to look inside the home and get some idea of the life of a homesteader. The homestead offers an great peak into the lives of those who founded and built the town in the 1800s. It serves today as a reminder of those pioneering spirits who made a new life in a land of severe weather and unknown dangers.

We Visited the Agate Fossil Beds National Monument in Nebraska

Family Well Traveled spent the day at an archaeological dig in Golden, Colorado.

Do you like to rummage around for fossils? Have you visited some other fossil sites? We’d love to hear what you think. Please, leave a comment. 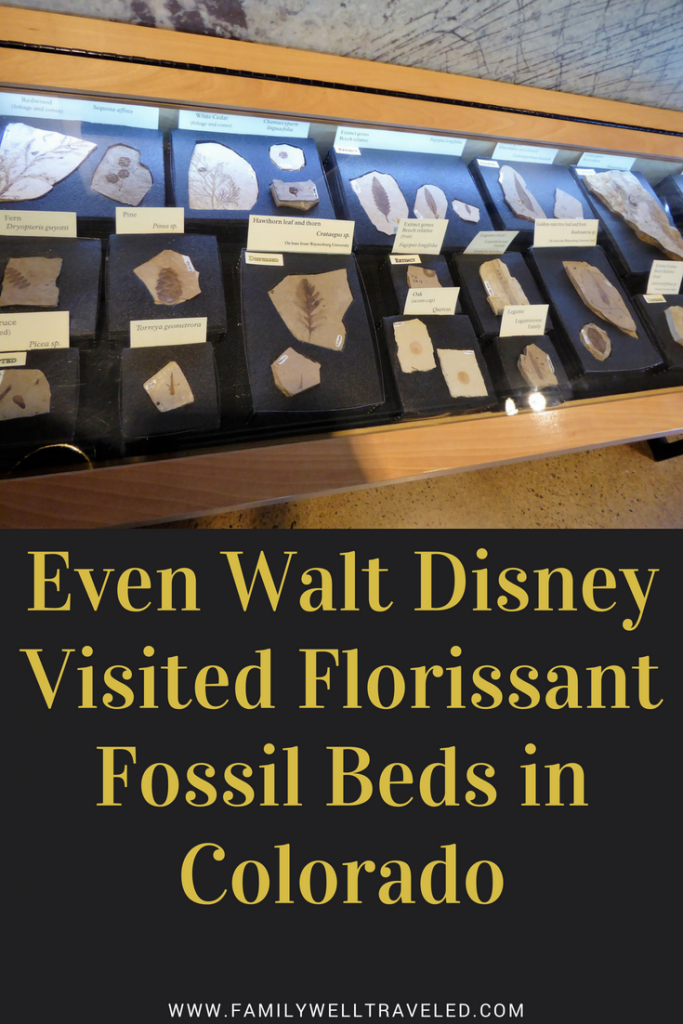